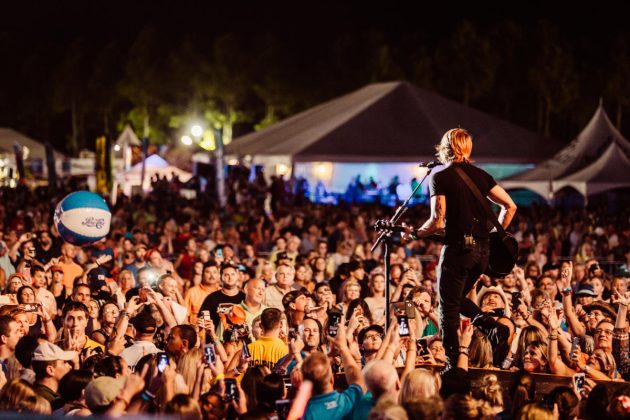 PANAMA CITY BEACH — One of the most popular music festivals in the South continues to set attendance records and continues to grab marketing deals.

The Bay County Tourist Development Council on Tuesday renewed its contract with the Pepsi Gulf Coast Jam, agreeing to pay $375,000 for each of the next three years.

“Gulf Coast Jam is a part of our integrated program to market Panama City Beach as a dynamic year-round destination,” Lacee Rudd, spokeswoman for the TDC, wrote in an email. “Over the past 10 years that we have been doing business with (the) Gulf Coast Jam, the tourist development tax collections (in the area) have increased by over 150%.”

Rudd said she believes the huge boost in tax collections is a testament to the TDC’s year-round marketing efforts, especially considering the increase happened in the wake of the Category 5 Hurricane Michael and the COVID-19 pandemic.

The latest Gulf Coast Jam, which was held June 2-5 at Frank Brown Park in Panama City Beach, drew about 80,000 music fans to celebrate its 10th anniversary. Officials have said it was “by far” the most successful event in its history.

It also marked the first time the Gulf Coast Jam offered a fourth day of performances, something it will continue to do in the future, said Rendy Lovelady, executive director. Before June’s sellout, the festival was a three-day event.

Rudd and Lovelady said the TDC’s $375,000 annual agreement is the same as in past years, despite the additional festival day. The money will be used for marketing.

“We’ve had COVID, we’ve had hurricane cancellations (and) we’ve had everything you can think of, and (the TDC) has always stayed consistent and constant,” Lovelady said. “We didn’t ask for any extra money even though we went to four nights (because) we understand the economy is the way it is, and we feel blessed (to have) the TDC as a sponsor.”

He noted the TDC is one of the event’s four main marketing partners. The others are Pepsi, Jim Beam and the Florida Restaurant and Lodging Association.

Lovelady said he believes the Gulf Coast Jam is an important part of the local economy because it not only gives people another reason to visit the area, it also attracts an audience who otherwise might not come.

He said about half of the 80,000 who attended the June event traveled more than 60 miles to Panama City Beach. Out of about 2,000 visitors who responded to a post-show survey, 70% said they plan to come back next year, he said.

“We’re on track to do extremely well (next year),” he said. “We’re a permanent fixture, (and) we’re not going anywhere.”

Morgan Wallen is the only headliner announced so far for the 2023 festival, but Lovelady said the rest of the lineup will be released later this year.

To purchase tickets for the 2023 Gulf Cost Jam, visit gulfcoastjam.com.