A Ruling From Florida’s Supreme Court Is Pending… 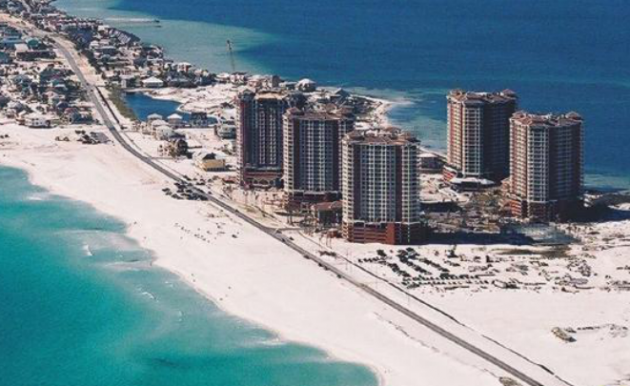 It has been almost a year since the Florida Supreme Court heard the two appeal cases of Santa Rosa Island leaseholders regarding the assessment of property taxes on Pensacola Beach and Navarre Beach leaseholds. In the meantime, taxes continue to be assessed and collected, although leaseholders may opt not to pay while the Supreme Court ruling is pending, according to a recent judgment by the lower court.

However, if the Florida Supreme Court doesn’t rule in favor of the leaseholders, then those who opted not to pay will owe the back taxes and more. “There will be interest due and possible penalties,” warned Santa Rosa County Property Appraiser Greg Brown.

It is important to note that residents and businesses of Pensacola Beach and Navarre Beach do not own the land they have built on. Instead, all land on the island is leased to individuals or corporations by the legislatively established Santa Rosa Island Authority (SRIA). This is a result of the deed restriction that was imposed by the Federal government when it sold the island to Escambia County in 1945.  The restriction provides for ownership by Escambia County and does not allow the county to re-sell the properties, thus no land is held under fee simple title. Then, in 1956, the SRIA leased what is now Navarre Beach to Santa Rosa County, allowing the county to administer the sub-leasing of the properties within its jurisdiction. In more recent years, both counties began levying property taxes to be paid by the leaseholders — thus, the disagreement and the law suits.

“Originally the incentive to build on Pensacola Beach was that residents didn’t have to pay property tax,” said SRIA Executive Director W.A. “Buck” Lee, referring to times in the late 1940’s when the island was underdeveloped and sparsely populated. In those early years, leaseholders weren’t assessed and taxation wasn’t an issue, and this provided an incentive to entice development and settlers, one that proved effective.

But as the area grew and modernized, tax officials from both Escambia and Santa Rosa counties took note that they were providing schools, utilities, roads and emergency responders to areas that were not generating tax revenue. “Taxes pay for services provided by the county,” Brown pointed out.  “It’s the fair thing to do—people on the mainland pay taxes.”  Currently, according to Brown, island properties within Santa Rosa County are being levied “according to market value” with Navarre Beach generating about $80 million in tax revenue since 2001. “That’s money the rest of the county would have had to come up with,” he said.

Still, the legality of whether leaseholders should pay taxes is a contentious subject. They contend the taxation isn’t legal because even though many of their leases are for a term of 99 years, automatically renewing for the same, they still don’t actually own the property. “It’s a strange law in that I have to pay taxes because I own it, but I have to pay a lease fee because I don’t own it,” said Danny Kepner of Shell Fleming Davis & Menge, the Pensacola law firm representing the leaseholders, taking the position of a leaseholder.

A new development to the situation, which is in response to island leaseholders’ 2010 request to Florida Congressman Jeff Miller and Senator Bill Nelson to pave the way for fee simple ownership, is bill HR2954, introduced by Miller on August 1.  “It will literally take an act of Congress to get this done,” said Dan McFaul a spokesman for Miller. In its present state, he said, the bill is written to affect only Santa Rosa Island leaseholders, rather than the entire state, and is carefully worded so as to not limit public access ways.

“With a decision from the courts on the assessment of property taxes on the beach leases expected in the near future, we wanted to make sure we were prepared to give the counties the tools they need,” said Miller in an emailed statement.

However, Kepner said the passage of time doesn’t necessarily indicate a ruling is forthcoming in the immediate future. “They have a fairly significant number of criminal cases to get to,” he said of Florida’s Supreme Court, explaining that these take precedence over civil cases such as the leaseholders.

Though the House bill as currently written would not automatically grant ownership to leaseholders, it would grant the counties the power to do so. At the same time, leaseholders would not be required to change their status. But first, the bill must make its way through what can be a lengthy legislative process that culminates with the signature of the President.

This isn’t the first time fee-simple ownership for the leaseholders has been on the table. Brown, who has publicly stood in favor of the change, said a Santa Rosa County ordinance was passed some years ago approving a fee-simple ownership option, but it was eventually shelved due to complications.

While buyers and investors typically shy away from uncertainty, Realtor Annemarie Kronfuss, who has worked the territory since 1995, said that prices in the area are extremely attractive and are expected to buoy the market despite the legal wrangling over taxation and ownership. “People can’t believe how low our prices are,” Kronfuss said.  “There are real values on the beach, and there are cash buyers who are going to take advantage of those properties no matter what.”

One of Pensacola Beach’s newest condo developments, Portofino, won a refund of about $10 million on appeal of the suit filed charging that leaseholds were being over-assessed at a tax rate higher than comparable properties. The suit addressed only the rate of the property tax and not the tax itself,