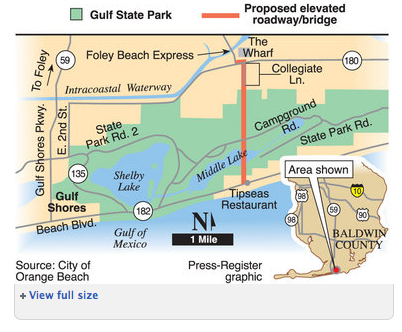 ORANGE BEACH, Alabama — The state says a planned elevated roadway over Gulf State Park would have minimal impact on the park, while environmentalists liken it to paving paradise.

“We want to find the lowest-impact way to go through the park,” said Tony Harris, a spokesman for the Alabama State Department of Transportation in Montgomery.
The roadway is still in the planning stages and will include engineering and environmental studies — and it could take two years before it’s complete, he said.

“The impact to the environment, the aesthetics and the people’s enjoyment in the park are all reasons we oppose it,” said Casi Callaway of the Mobile Baykeeper preservation group.
Mayor Tony Kennon told residents at a town hall meeting earlier this week about the state’s plans, which could result in moving the toll plaza at the bridge on the Intracoastal Waterway to Baldwin County 20 in Foley.

The bridge, dubbed the Cross Island Parkway by some, would start at Ala. 182, or Perdido Beach Boulevard, behind a power substation near Tipseas Restaurant. The bridge would then travel over the park’s wildlife area and part of a lake, and drop motorists onto Canal Road at the entrance to the Foley Beach Express.

The elevated roadway would follow Collegiate Lane, or what locals call Power Line Road, a dirt road that is used by eight different utilities, city officials said. “We don’t want to speculate what will be elevated and won’t,” Harris said. “We haven’t done the route yet. I don’t know if it was appropriate for the mayor to be talking about it yet.”

The state wants to build a bridge over the park to help traffic flow at the beach.
Kennon said he told state highway director John Cooper that he was going to announce it at the town hall meeting, and the director “was perfectly happy with it. People want to know why Canal Road has not been widened. We’ve got road problems and I’ve got to tell folks what’s going on.”

The elevated roadway would take the place of a state project to widen Canal Road to five lanes, according to Kennon. This would also alleviate traffic congestion on Canal Road, and provide another evacuation route, he said.

“I’m as much a conservationist as anybody and I love our parks,” Kennon said. “The point is, we cannot move traffic with the road system we have.” The elevated road would also give everybody a chance to see the beautiful park, he said.

A bridge cutting through the park may deter visitors, according to Callaway. In fact, she said the state considered putting a paved road through the park several years ago, and that was met with little support from state and city officials at the time. She said an elevated road would still impact the park.

David Underhill, conservation chair for the Mobile Bay Sierra Club, agreed. “Instead of paving the park’s surviving bit of paradise, tax money should be spent only for creation of a public transit system, including biking and hiking paths, that keep cars on the mainland and off the island.”

If the state does build the elevated roadway, there are ways to limit the potential negative impacts to the park, according to Phillip West, the city’s coastal resources manager. He is also project manager of the 11-mile Hugh S. Branyon Backcountry Trail, which runs through the city and Gulf State Park.

“I’d love to have a park without any disconnection to it. I can see the need, but there has to be mitigating factors with it being elevated,” he said. For instance, he said designers should create sound and light deflectors; lower the speed limit; stain the concrete road for less visual impact with earth-tone colors; limit the type of vehicles that can use the road by restricting motorcycles and 18-wheelers that make a lot of noise.

“Some of these things will cost more money,” West said. “But if they’ve got to do it, do it right and don’t skimp on the costs.”