Have Pet, Will Travel… 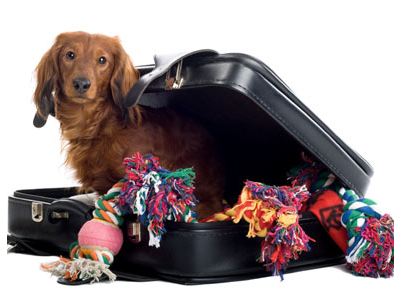 Over the years, pets—especially dogs—have become an increasingly important part of our lives. In fact, according to a 2009 Travelhorizons survey, over 49 percent of adult leisure travelers in the United States consider their pet part of the family. It’s no surprise then that more and more pet owners are choosing to take their furry, four-legged friends with them when they travel. TripAdvisor®’s annual pet travel survey revealed that 44 percent of U.S. animal owners traveled with their pets in the last 12 months (as of September 2011) and many have plans to do so in the next year. Of the 47 percent who plan to travel with their furry companions in the future, 39 percent responded that they will stay in a vacation rental.

This growing trend, however, is offset by the fact that, historically, many condo associations and rental companies do not allow pets on property. “Many associations actually have it in their guidelines that owners can bring pets but guests cannot,” said Marie Curren, director of marketing and reservations for Brett/Robinson. Orange Beach’s Mariner Pass is one complex that has never allowed renters to bring pets—only owners are allowed to bring a pet. “Our building is going into its seventh year, and those rules have been in place since they were originally written by the developer,” said Doug Bryant, president of the condo association. “We haven’t had any reason to change it.” Perdido Dunes, also in Orange Beach, actually changed their pet policy just a couple of years ago to exclude renters from bringing pets. “Only owners can bring pets,” said Milton Page, president of the condo association. “We went to this policy after a situation that took us three months to eradicate fleas that spread to multiple units because of one pet in one unit.”

The only exception to these association rules are for those who need service animals. Under the Americans with Disabilities Act, businesses and organizations are required to allow those with disabilities to bring service animals wherever the public is normally allowed. If a business or organization refuses to do so, it could be penalized and forced to pay monetary damages.

Brett/Robinson manages 1,860 condo properties on the Gulf Coast. Currently, none of those condo properties allow renters to bring pets, unless it’s a service animal. “Managing pets in condo rentals is very complex,” Curren said. “There are a lot of questions that get raised with the idea. What if we put a guest in a room that had a dog a few months ago and there are fleas everywhere? What do you do with someone highly allergic? If you have one dog in a building, every guest will be affected by it. So there are so many issues that have to be well thought out. There’s a long list of considerations.”

ResortQuest, a rental company that manages 3,000 condos along the Gulf Coast, does allow pets, but it actually varies by each condo unit because the property owner ultimately makes the decision, said Martin Owens, regional marketing director for Northwest Florida. “ResortQuest has a policy of encouraging people to travel with pets, but individual owners have to make the decision as to whether they will allow it on their property,” Owens said. “We always encourage our owners to look favorably on pets.”

Brett/Robinson is actually looking into how to incorporate pet travelers into its properties and discussing the idea with some of its condo associations. “This is a whole new way of thinking, not just for the rental company but for the association boards and actual owners within those buildings to have them take a look at it,” Curren said. “And it’s a really big step for us as a company to try to figure out a way to allow dogs in condos.”

The group of pet owners that seems to benefit most from changes to condo association guidelines about pets is long-term renters, who visit the Gulf Coast area during winter months for weeks at a time, Curren said. “That’s the biggest demand demographic,” she said. “During summer months, guests stay an average of 4.6 nights, so the demand isn’t as big during that season because I think many owners don’t feel bad kenneling a dog for just a few nights. But those that can go on extended vacations are part of the market that I think we’re not servicing.”

Condo owners at Gulf View Condos, a 34-unit complex in Gulf Shores, changed their pet policy to make it easier for owners to rent to long-term renters.  “A couple of years ago, the question came up about pets from some owners who wanted to rent to long-term renters,” said Mike Stone, president of the complex’s condo association. To make it easier on these owners, the association agreed to allow pets. “The new rule requires that an owner, if renting to someone with a pet, has to pay a deposit so that if the dog is not properly cleaned up after, funds are there to cover the cleaning costs,” Stone said. “So far we haven’t had any issues to make us reexamine this new policy.”

While many understand and see the need for more pet-friendly condos, they also recognize that it’s probably not something that’s going to change too much very quickly. “I think this is a conversation that’s going to go on for a while,” Curren said. “Some are more open to the idea than others. Right now there seems to be no big general consensus. But there are a lot of details to work out. We’ll probably find a few owners who would like to do some beta testing and see if it makes a difference in their income if they are pet friendly.”

One Response to Have Pet, Will Travel…