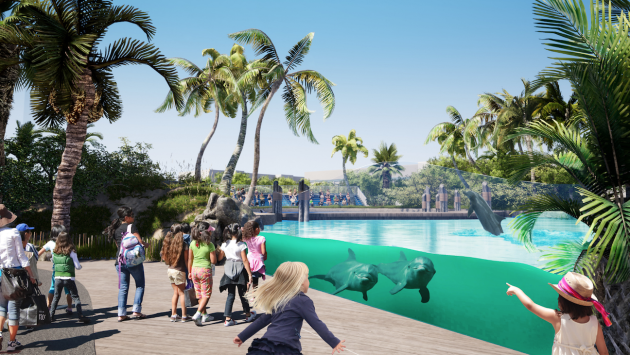 FORT WALTON BEACH – The dolphins at Gulfarium Marine Adventure Park will level up in the spring of 2023 with their new pad, aka the Dolphin Oasis.

More than 50 people stood in the sand Tuesday morning on the 2.2-acre property next to U.S. Highway 98 on Okaloosa Island that will become the multimillion-dollar dolphin habitat after its 12- to 14-month construction. The habitat will feature more than 1 million gallons of water fed from the Gulf of Mexico — three times the amount of their existing habitat — and make room for 11 to 15 dolphins to live comfortably.

Patrick Berry, the Gulfarium’s Senior Vice President and COO, said he believes the name of the new habitat is fitting. “It embodies a lush green immersive environment with sand and picturesque waters,” Berry said. “An oasis is a refuge, right? We feel it will be a refuge for our guests when they come to this area — whether they’re coming locally or nationally or internationally — and obviously for the animals that are going to inhabit that habitat as well.”

The Gulfarium will continue its normal operations through construction and aims for an opening in the spring of 2023.

Many community members attended and hosted the groundbreaking. Steven Vaggalis, the pastor of Destiny Worship Center’s Fort Walton Beach campus, started the event with a prayer; Don Gaetz, a former member of the Florida State Senate, led the Pledge of Allegiance; Willis Merrill, the President of the Gulfarium, shared some history of the park; and Collier Merrill, a Gulfarium board member, thanked people for coming.

Berry then shared details of the new addition.

He said the Gulfarium has been focused on bringing the dolphin habitat to fruition for 10 years, and began the design process two-and-a-half years ago. The Gulfarium has been growing, with 2021 marking its largest attended year, he added. “Gulfarium was originally built in 1955, and it was a pioneering state-of-the-art facility when it was first built,” Berry said. “Of course, as time has gone on, things have advanced and so have we. This is part of one of our advances, this brand new habitat that we’re gonna be building.”

The habitat was designed by MIG in Seattle, Washington, with three things in mind: animal welfare, the guest experience and conservation education, Berry said. Guests will walk on what is called the Expedition Trail, passing the crocodiles and the Care Center for sea turtle rehabilitation, to arrive at the Dolphin Oasis. It will feature three connected areas: the Presentation, Exhibit and Encounter habitats, which the dolphins can swim between.

Like in the current habitat, the new one allow guests to see animals up close, interact with the them and learn about conservation. The Presentation Habitat has seating for 480 people and standing room for more behind it. “There will be an acrylic window for viewing, much like we’ve got our portable windows in the current habitat,” Berry said. “I can’t tell you how many times I walked through our halls in the main habitat that we currently have, and I’ll hear families and kids and adults looking through those windows and just howling and seeing the dolphins. We wanted to be able to give that to our guests in new habitat.”

Dolphin Oasis will also feature room for events and an Encounter Building with washrooms. The Gulfarium wanted to be “cutting edge,” particularly in its animal welfare, Berry said. That is shown in life support, which is how water is brought into the habitat from the Gulf. The Gulfarium will not only use traditional sand filters to clean the water, but also defender filters.

The new filters will provide another new opportunity. “Our current habitat, we utilize a small amount of chlorine to help keep it clean — very trace amounts — but that would preclude us from having fish in the main habitat,” Berry said. “Currently, with this new habitat, we’re looking forward to the possibility of having live fish, (and) that will continue with the environmental enrichment and the animal welfare that dolphins can check out.”

Another aspect is that animal welfare professionals will have more areas to interact and build relationships with the animals, Berry said. The habitat will also include areas at the bottom to connect what are called “enrichment devices,” he said.

“You might have been here before and seen dolphins playing with balls, basketballs and footballs, but we’ll be able to tie things down or connect things to the bottom of the habitat, enabling the dolphins to have more things to play with and choice as well,” Berry said. The Exhibit Habitat will enable births and slipstreaming, which allows the mother dolphin and baby calf to move into the position to nurse.

Mary Kate Northup, the Operations Manager, said the Gulfarium now has seven dolphins — three females and four males — but that they expect the number to grow in the new habitat. While the existing habitat is an awesome structure; it has definitely outlived itself, she said. “Now that we’re finally here at the groundbreaking and actually turning dirt, it is pretty amazing, pretty surreal,” Northup said. “We’re just really excited for the animals. That’s our top priority with all of this, and then with our guest experience as well. We’re just really looking forward to the future.”