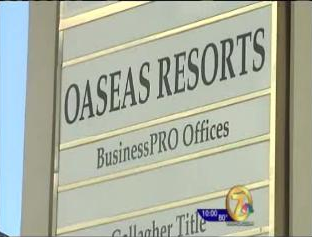 The rental management company has put dozens of condo owners and vacationers at a stand still.

Condo owners and vacationers have been flocking to the department’s web site since Thursday when investigators set-up a separate section to handle the complaints.

The rental management company shut its doors Wednesday without providing many answers.

“I personally have never seen a crime like this of this magnitude or one that has the potential to be as big as this,” said Major Chad Lindsey.

Major Lindsey says most of the complaints are from condo owners and tourists hoping to get their money back.

The Bay County Tourist Development Council spends millions of dollars a year to bring people to local beaches and this is not the kind of publicity any tourist destination wants to receive.

TDC Officials don’t seem to be too concerned about this particular issue.

“I do not believe that this is going to create a black eye for the Panama City Beach tourism industry. This is a bump in the road,” said Bay County TDC Executive Director, Dan Rowe.

In fact, Rowe says he doesn’t believe the beach’s reputation is at stake and that most people have a good opinion of the area.

A handful of rental companies are trying to help those who have booked through Oaseas.

Oaseas had a resort management office in the Smokey Mountains, but that also recently closed.