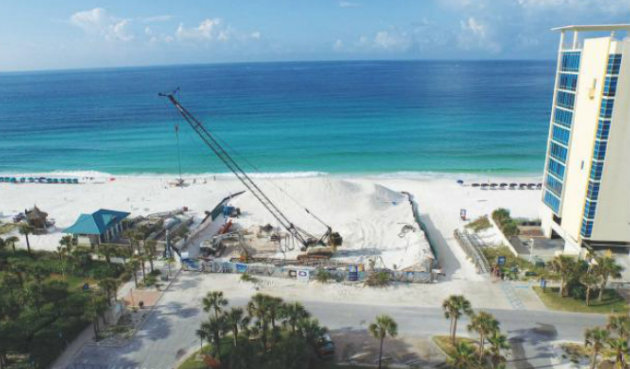 In early June, just as the Emerald Coast’s summer season was getting underway, construction began at 1900 Ninety Eight, the first condo to be built on Destin’s gulf coast in more than six years.

With 10 of the 16 units under contract and all permits approved, the production pilings were being put into place, to be followed by work on the foundation and placement of underground utilities, according to Chris Abbott, broker and owner, with Scenic Sotheby’s International Realty, which is managing the sales of the new condominiums.

“It has taken many years to get to this point and we are excited to have reached this stage of the project,” Abbott said. “The construction of a new condominium in Destin is also a sign that this market is stable and steady.”

He explained that the property now being developed has been owned by some of the developers for many years. In the mid-2000s, a condo development for the site was approved and then tabled when the local and national economy took a downturn. By 2013, however, real estate had begun to rebound in northwest Florida and a new, luxury condominium community was planned for the site.

Abbott cited a number of reasons why the new condominiums are selling so well. He credited BRW Development Partners for their oversight of all details of the project and pointed out that 1900 Ninety Eight’s location has been a major draw. The condo is being built on a 150-foot beachfront tract on Scenic Highway 98, which is the last section of beachfront available for building a condo along Destin’s stretch of the Gulf of Mexico.

“This is a prized location, because the east side borders Henderson Beach State Park, which means the owners of units on the building’s east side will always enjoy completely open, unobstructed views as far as the eye can see,” Abbott said. “Additionally, this location offers easy access to shopping, dining, recreation and various Destin attractions.

He added that unique design elements are also proving popular with buyers. The project’s architect, Walton Chancey, owner of Gulf Coastal Development, Inc., based in Tampa, took a contemporary approach to set 1900 Ninety Eight apart from the most recently built condos along Destin’s gulf coast, many of which were constructed in the 1990s and early 2000s. Using a Mid-Century Modern style, Chancey’s design features a streamlined exterior, open interior floor plans and walls of windows that bring the outdoors inside.

As of early June, six units were still left for sale, ranging in price from $1.3 million to $3 million, according to Abbott. One of these is a two-story, 4,556-square-foot penthouse unit on the west side of the building, with four bedrooms and four baths. The other five units range in size from 2,603 square feet to 2,627 square feet and have three bedrooms and three baths.

Abbott said that 1900 Ninety Eight has an international appeal, partly due to Destin’s reputation as a high-end vacation and second-home destination and partly because of the international outreach provided by Scenic Sotheby’s International Realty. Buyers to date, he said, have come from several parts of the U.S., as well as Sweden and South America.

“We are seeing a lot of active buyers in this market and they are coming from all over the world,” he said. “This market is growing healthier by the day.”