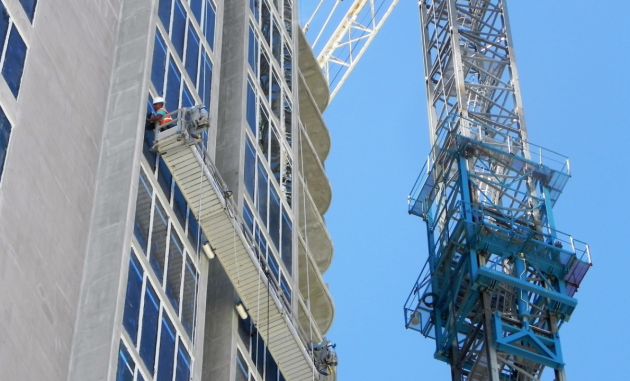 ORANGE BEACH, AL — The hum of machines, clattering of nail guns and banging of hammers is being loudly reverberated across the landscape of both Orange Beach and Gulf Shores.

A look at the agenda for the Orange Beach Planning Commission’s meeting on Monday harkens back to the days of the mid-2000s boom period.

That bustling activity is likely to continue as the commission will address a new condo tower west of the Cotton Bayou Beach Access, 69 homes next to Villages of Romar on the beach and 56 town homes on a lot in Canal Square Lane behind Blalock’s Seafood.

“That reminds back from the days of 2006 and 2007 when we were busy,” City Planner Griffin Powell said.

On Sept. 27 the Gulf Shores saw the preliminary approvals for a potential of 1,208 homes and multi-family units on 178-acre former site of Woodlands Golf Course, a 98-room Comfort Inn hotel on the north side of East Beach Boulevard and 106 apartments at Bon Secour Village north of the Intracoastal Waterway.

“It is picking up from previous years,” City Planner Andy Bauer said.

Added to the 77 single family home permits issued from Jan. 1 through March 31 the total for the year in Gulf Shores is now at 178 through September.

Earlier this year Gulf Shores approved Abaco, a 78-unit, 24-story Gulf-front condominium complex planned for West Beach Boulevard in Gulf Shores. It will include a pool oasis with a lazy river.

The three-bedroom units are 2,080 square feet and up, and prices start at $750,000. The property has 200 front feet on the Gulf and is about one mile west of the Hangout.

Also in Gulf Shores Brett-Robinson is building an 80-unit, 22-story condo called Phoenix Gulf Shores and construction began there in December of 2014.

If Caribe on the Beach West is approved there will be three new 20-plus story condos within a half mile of the only north/south connection to the beach in Orange Beach.

The new Caribe would be on the east side of Summer Chase, is planned be 27 stories tall and have 170 units.

“Nathan Cox and Larry Wireman are the partners on the project is what we’ve heard,” Powell said. “They are going for a site-plan approval so all they need is approval from the planning commission. That property is zoned beach resort high density and they are doing was it permitted by right in that zoning district. It’s not a rezoning or anything, just a strict site plan approval.”

West of the Hampton Inn preliminary work has already begun on Phoenix Orange Beach. It will be more than 20 stories high with 112 three- and four-bedroom units.

It will be directly east of the Hampton Inn next to a parcel where the same developer received approval for Grace and Ascension, two towers proposed near the intersection of Alabama 161 and Alabama 182. Both would top 35 stories and comprise 277 high-end condo units.

At Canal Square Lane, owner Michael Specchio will ask the city at Monday’s meeting to rezone just more than 10 acres from general business to residential to build a 56-unit townhome development. He is also requested permission to subdivide the same plot.

“I don’t recall when it was built but you have a lot of lots back there people have tried to develop for commercial purposes,” Powell said of Canal Square. “Nothing has come through on it.”

Also Monday Grander Marine is asking for site plan approval to construct an 11,900-square foot building on 4.96 acres for a boat retail facility as well as office spaces and service bays in the rear of the building. The municipal address is 26754 Canal Road in the general business zoning district.

Two new hotels opened on the island this year, Hampton Inn on Alabama 59 near the city complex with 89 rooms and The Tides on the Gulf east of the side of the Cotton Bayou Beach Access in Orange Beach.

Two others are currently under construction, Indigo on beach road in west Orange Beach and Springhill Suites by Marriot at The Wharf. Indigo will have 63 rooms and Springhill will have 140 suites. Of the two, Springhill is closest to completion.