The yoga classes are offered Mondays, Tuesdays and Thursdays at the zoo from 6-7 p.m. 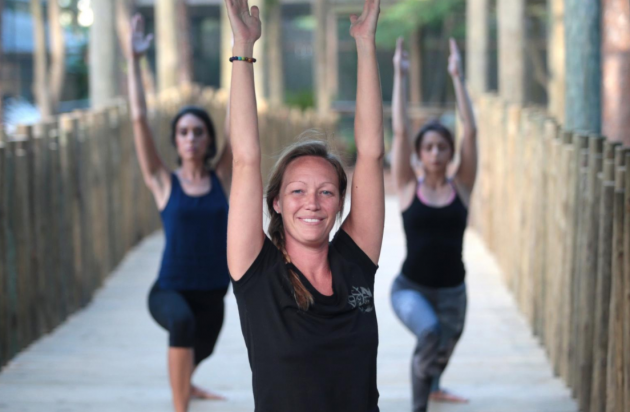 PANAMA CITY BEACH — The calls of monkeys and cries of tropical birds set the tone for Thursday night yoga, the latest offering at Zoo World.

Perched on a bridge that extends over the alligator pond, a small group of yogis moved from pose to pose. When they moved in downward facing dog, the “zoo dogs” — a terrier mix and French bull dog mix — came bounding up the bridge, excitedly licking the face of one of the zookeepers.

The yoga classes are offered Mondays, Tuesdays and Thursdays at the zoo from 6-7 p.m. and are new this year.

“This is just something new we are doing,” said operations manager Jessica Kiefer, who participates in the classes. “What’s more peaceful than being outside surrounded by animals doing yoga?”

The yoga classes are done either on the boardwalk over the gator pond, by the lion cub exhibit or in the farm area, as these places are the most comfortable, Kiefer said. The participants are not inside the exhibits for everyone’s safety.

Besides, “it would be hard to do a pose and have an animal crawl on top of you,” Kiefer said.

The classes are designed to accommodate all skill levels, with a combination of easy and challenging poses. The poses can be modified to different skill levels.

During the Thursday night class — typically the most popular of the week — the tone was casual. Some people clearly knew what they were doing, contorting their limbs into seemingly impossible positions. Others were just starting out and keeping it simple.

At one point, one of the more advanced students fell with a loud thud out of a particularly difficult looking pose that required her to balance on one foot with her other leg extended above her head.

“I lost it,” she said with a shrug and a laugh before trying again.

The classes are $5 for season pass holders and $10 for a one-time visit. If you buy two classes in advance, you get one class for free. There is a little bit of time to look around the zoo before and after the class, but for the most part exploring is limited to the area where class is being held. Children are welcome but must be supervised by their parents.