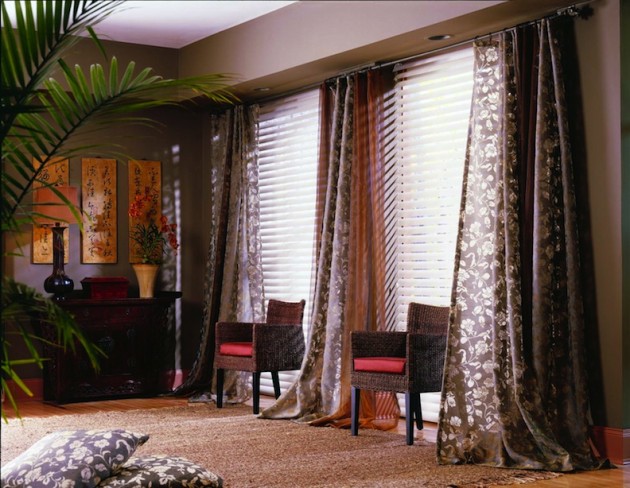 Coastal condominiums often feature very large windows that take advantage of scenic views, so the way that they are adorned has a major effect on the look and feel of a room, according to area designers.

“Window treatments are an integral part of any room, said Lucille Carollo, manager and designer at bela beach in Destin, Fla. “They add to the beauty of a room, and at the same time provide privacy and insulation.”

Carollo said most of her clients who are furnishing condos prefer the tailored look, forgoing the elaborate top treatments of former years. “I sometimes use a hard cornice over my drapes, but always with a classic shape and not a lot of adornments,” she said. “Linen drapes are a favorite of mine, as they are classic, and offer a timeless look. Most are solid in color and will work with any pattern that is used in a room. To avoid having the drape appear plain, I often use a contrasting border, fringe or gimp to dress it up.”

“In the last year, I have seen a lot of people going back to neutral tones, such as off-white and beige,” said Elisabeth Watson, senior sales manager and designer at InsideOut in Pensacola. “It’s somewhat reminiscent of colors used in the late 1980s, but it’s also very practical because neutral tones can hold up over longer periods of time.”

Sometimes the monochromatic effect created by neutral shades is given depth and visual interest by using textured materials, she added.

At the same time, there are those who want to be a bit more daring and are starting to use drapes with bold geometric designs, Watson said. “I am seeing this more in larger cities, like New Orleans, Nashville and Charlotte, but it’s starting to pick up in this area,” she said.

Mary Donohue, owner of Window Décor and More in Orange Beach, Ala., said many condo owners she works with are opting for a very minimalist look, using retractable solar shades accompanied by decorative panels or valences.

“When it comes to color, most of my customers fall into one of two categories,” she said. “There are those who like the light and breezy shades of whites and blues. And there are those who want to decorate in colors that don’t look too beachy; they like warm traditional tones of gold and brown.”

Cyndi Clark, sales and design consultant at Coco Beach Interiors in Orange Beach, said that she has seen color choices move away from reds toward a variety of shades inspired by the colors of the Gulf of Mexico, ranging from aquamarine to soft green, often infused with shimmering accents. Additionally, she said, natural woven products in shades of tan and brown are very popular right now.”

There a number of considerations beyond appearance when selecting interior window treatments, Donohue pointed out.

“When deciding what to use on windows overlooking the beach, always keep in mind that the main thing you paid for is the view. So, while you want to keep out the heat and glare, you don’t want to cover up the scenery,” she advised. “If most of what you see when you pull back the drapes is billowing fabric, then it takes away from the view.”

Watson said many people are moving toward draperies with micro-pleats or no pleats at all in order to prevent having large amounts of heavy fabric at the edges of the window. “In the past, a lot of people used very full, pleated drapes where the amount of material was nearly double the width of the window,” she said. “They took up a lot of space at the sides when they were pulled back. By staying away from the pleats, you have less material to deal with when the drapes are open.”

She added that many condo owners in the Pensacola area are starting to use Hoji screens, an Asian-inspired product that has panels of 18 to 24 inches, which stack back on one side by overlapping each other when they are opened.

Donohue suggested synthetically blended fabrics rather than 100 percent silk, linen or cotton, because they are less expensive and more resistant to shrinking and expanding.

Synthetic blends can help create a more formal look in the living room or dining room, according to Carollo. “ I prefer a beautiful heavy polyester fabric that has the appearance of silk, but is much more durable,” she said. “I either line and interline it, or use a heavy blackout lining to achieve a richness in appearance.”

“As for hardware, the Architrac Rod is usually my choice as it is simple, strong and durable, and usually tends to disappear into the wall or ceiling,” she added. “In more formal rooms, I often use an estate ultra rod which offers the same function, but is more decorative and has an array of wonderful finial choices that set off the rod and drapery beautifully.”

While most people come to the coast to enjoy the sunshine, window treatments are often essential to blocking some of its effects, such as intense heat, glare and fading of fabrics. Watson said that treating the window glass itself with films that block the ultraviolet rays can reduce cooling costs and prevent fading.

Donohue said that solar shades are extremely good at blocking the glare while allowing an unobstructed view, functioning “like sunglasses for your windows.”

According to Clark, Roman shades, made of fabric or from woven grasses, are energy efficient and offer a clean, neat look. “Interior shutters are also very popular, especially in situations where people need to create privacy while allowing light to get in,” she said. “Shutters have proven to be effective at preventing furniture from fading.”

Since most condominium complexes have lights that are on 24 hours a day in the hallways and rear entrances, windows in the back bedrooms usually need to have treatments that completely block the light, Donohue pointed out.

She said a lot of people in older condos that had vertical blinds are now using a synthetic product that comes in more than 30 colors and includes a black-out liner.

Watson said that many people make the mistake of assuming that they can save money by purchasing window treatments off the shelf from major discount chain stores. “I have found that there really is no such thing as ‘ready-to-wear’ drapes,” she said. “We have seen situations where people bought pre-made drapes and then had to have them all altered to fit right, which ended up costing as much or more as having them custom-made.”

“If you are careful with your fabric selections, there is no doubt that custom drapes are affordable, and the most practical way for condo owners to cover windows,” Carollo agreed.