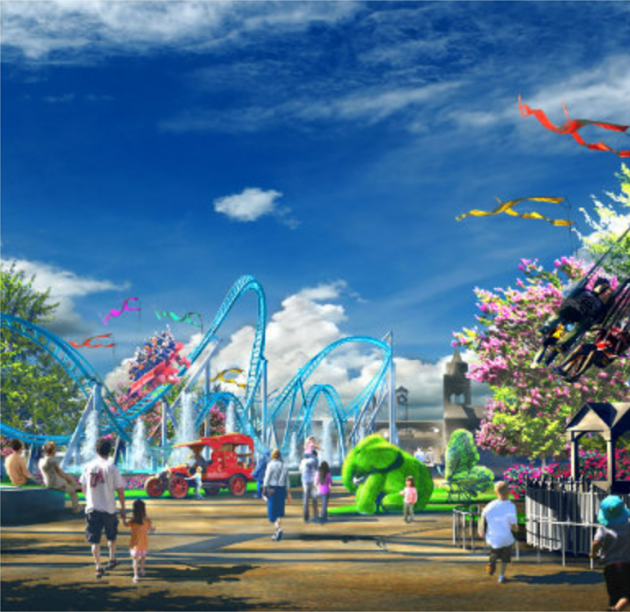 What is initially being touted as one the “longest roller coaster” rides in the U.S. will anchor a new theme park opening in the coastal Alabama by Memorial Day weekend.

The roller coaster, which has not yet been named, will join 20 rides and two other “thrill rides” within 14 acres of a 520-acre development site in Foley, about nine miles from Alabama’s beaches.

Renderings of the amusement park, which will be adjacent to the Foley Beach Express, were recently unveiled. It’s included in the Poarch Band Creek of Indians first major non-gaming development in Alabama.

“It’s our intent to put people in roller coasters next May, Memorial Day weekend,” said Tim Martin, president of Creek Indiana Enterprises Development Authority. “It’s risky. We know it. But we have a great construction team. We are going forward and it will be successful.”

Martin compared the roller coaster to Thunderbolt, which opened in New York’s Coney Island in 2014. The same designer of the Foley roller coaster, Italian-based Zamperla, designed and manufactured Thunderbolt.

Martin said that “six to seven” mid-size rides and children rides are included. He said there is enough property to double the amusement park’s size.

“If you think of Six Flags and Disney (World), I’m not going to spend the money Disney spends,” said Martin. “But I’ll build … closer to Disney. If Disney is the main entree, we’ll give them heavy hors d’oeuvres.”

The amusement park is part of an overall project named “OWA,” which means “Big Water” in the Muscogee Creek language. The language is spoken by the Poarch Band of Creek Indians, the only federally-recognized tribe in Alabama that owns and operates the only three casinos in the state.

The OWA name was also unveiled for the first time during Wednesday’s event in Foley.

Also included in the initial $241 million phase: A new 150-room Marriott TownePlace Suites; 1540,000 square feet of dining, retail and entertainment space; and a 14-acre lake with a 1.5-acre island. The island will include a 300-seat outdoor amphitheater and boathouse.

“OWA is in our tribal name and it means ‘Big Water’ and one of the central themes of this is a 14-acre lake and the middle of it, a big island,” said Martin. “It’s all about branding, marketing and a great experience.”

OWA will be divided up into four “distinct districts,” Martin said, that emulates a “mystical southern town.” The districts include a warehouse district, the downtown district, the main commerce district and the theme park. A future addition is being called the “garden district.”

Martin declined to name any specific retail stores or restaurants that will open on site. He said the Poarch Band of Creek Indians plans on making intermittent announcements leading up to Memorial Day weekend.

“We’ll give tidbits out,” said Martin. “They will be local, regional and national tenants. The dining, we believe, will be the anchors here.”

OWA will augment a nearby $40 million sports complex, which was development by the city of Foley and includes 16 soccer fields that opened this year. A $16 million, 90,000-square-foot indoor events center is slated to open next summer.

That project is being paid for through two bond issues the city endorsed, one which includes a 25-year payback and another at 30 years.

Jeff Rouzie, director of economic development with the city of Foley, said revenue from the facility is expected to help pay back the bonds. He called the entire facility “self-funded,” and that the project was conceived thanks to several feasibility studies he said showed a strong economic impact from it.

The analyses were not immediately available.

State incentives are also part of the package, but exact details were also not available and spokesperson with the Alabama Department of Commerce did not return a call for comment.

Rouzie said the developers will receive a sales tax exemption on materials purchased to build the facility as well as a 10-year property tax abatement.

The city also spent around $2.4 million on the construction of a $12 million extension of Pride Drive, a four-lane boulevard which extends from Ala. 59 into the development.

The project was funded through an Alabama Transportation Rehabilitation and Improvement, or ATRIP, grant.

“We’re talking about a public-private partnership that we could not do without the city and state,” said Martin.

Martin said the initial OWA development will generate an additional 7 percent of all tourist spending in the South Alabama region, which is the hottest tourism driver for the state bolstered by the beaches in Gulf Shores and Orange Beach.

Said Lee Sentell, director of Alabama Tourism: “People are coming to the beach in larger numbers every year. (Baldwin) County represents 30 percent of the travel expenditures in the state, which is just phenomenal.”

Martin said the development is located to capture nearly 6.2 million visitors who flock to the beaches for surf and sand.

“We’ve never had this kind of incredible destination to promote,” said Sentell.

Martin said he anticipates an additional 1 million visitors coming to the region for sports tourism-related activities at the nearby fields.

He also said that OWA can benefit from the shopping traffic at nearby Tanger Outlets on Ala. 59.

“What people don’t realize is that at Tanger Outlets, some of their best performing months are November and December,” said Martin. “We’ll compliment that.”

The project is anticipated to bring in an average of 2,072 jobs, both direct and indirect hires, each year.

Reid Cummings, director of the University of South Alabama’s Center for Real Estate and Economic Development at the Mitchell College of Business, said that the Poarch Band of Creek Indians’ investment into the project will further bolster Mobile and Baldwin’s dominance in Alabama tourism.

He also said it will make fuel an increase in sales tax going back into state coffers.

“It’s a great opportunity for growth,” Cummings said. “It’s a real blessing to have the Poarch Band of Creek Indians invest and expand into other areas and support other communities.”

One Response to Upscale Amusement Park Set For Alabama Coast