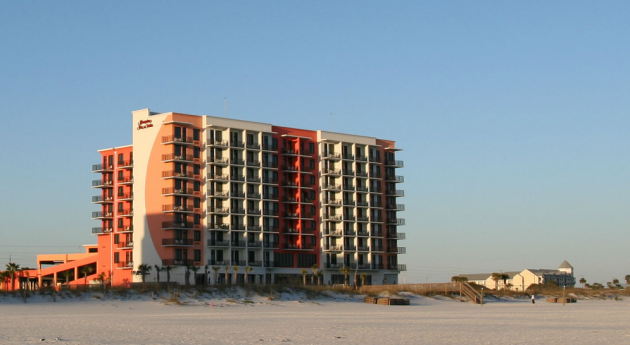 ORANGE BEACH, Alabama — Plans are in the works for two new condominium towers across from the Publix-anchored shopping center on the beach highway.

At 36 and 35 stories, the two towers dubbed Ascension and Grace, respectively, would be the tallest on the Alabama Gulf Coast. At present, the 33-story Turquoise Place tower in Orange Beach is the tallest at 370 feet.

The proposed towers are being pitched by GCOF Orange Beach Gulf Front LLC, headed by Nathan Cox, owner Spanish Fort-based Bellator Real Estate and Development and Truland Homes. The property was purchase in late 2012 for about $11.4 million through the Gulf Coast Opportunities Fund.

The Orange Beach Planning Commission was scheduled to hear a request on Nov. 10 by GCOF to rezone two Gulf-front parcels near the intersection of Perdido Beach Boulevard and Ala. 161, totaling 10.5 acres, from BR-2, beach resort high density, and RM-2, multi-family residential, to a planned unit development. A PUD is a flexible zoning classification that would allow the tall towers if approved by the council.

After the Community Development Department’s initial review, GCOF requested a deferral to the board’s December meeting, where a recommendation would be made to the council.

Under the current zoning of the property, condos would be limited to 26 stories — 20 residential, five for parking and one for amenities, such as an indoor pool. Under the special PUD zoning, a developer can request a waiver to the height requirement as part of its master plan as long as they can prove it complies with design standards, according to City Planner Griffin Powell.

According to the developer’s initial request, Ascension would have 36 stories with 201 units and Grace, 35 stories with 77 units.

The proposed height of the condo towers is already causing some concern among residents. Cecil Young, a resident who routinely attends council meetings, brought the subject up during a meeting last month.

“I heard through the rumor mill, which everybody hears, that we’re going to build two new condos here down at the end of 161,” Young said. “I thought, when they came here before I think it was 24 floors, and now I understand it’s 35 and 36 floors. I thought we had enough big ones down here and there’s enough complaints about the big condos. Is the city going to allow that to go through?

“If they do that where’s it going to stop?”

Mayor Tony Kennon said nothing has been approved and the plans will be vetted by the planning commission before it reaches the council.

Young said he just wanted the public to know that it was coming.

“I think sometime we’re going to have to put a moratorium on the height on condos in our city,” Young said. “Now that’s my opinion. If people want 40 stories I don’t care but I do think it’s ugly. The way they are they may be beautiful buildings but on that corner as much traffic as we have it’s going to be a nightmare.”

Kennon pointed out that the developers have been working with the Alabama Department of Transportation to tackle future traffic issues at that busy intersection.

As far as limiting condos on the beach, the mayor said other areas along the beach have been allowed to revert back to residential areas, such as Romar Cottages on the city’s west end, which was originally pegged as a high-density area.

The area in question now was allowed to remain high density because of its location, Kennon said.

“The location fit the demand and need of the shopping centers and it made sense that the two were interconnected,” he said. “And there is a traffic plan that has already been drawn out by the state to deal with the traffic issues in that intersection with growth going forward. … They had to work it out amongst themselves before we would allow them to move forward.”

The proposed site for the Ascension and Grace towers is the former location of the proposed Mandolay Beach project that was originally approved for two 36-story towers in the post-Hurricane Ivan building boom in 2005, and later recast as a convention center and resort with two towers at 17 and 21 stories. By 2008, however, the project withered along side the national real estate market during the Great Recession.

A sliver of the original 14-acre parcel, which lost its PUD designation in September 2009, was used to build the nine-story Hampton Inn and Suites.

The remaining bank-owned acreage was then bought in 2012 by Gulf Coast Opportunities Fund, which was established by New York-based Bienville Capital Management, an investment and advisory firm founded by Mobile nativesCullen Thompson, Billy Stimpson and Ralph Reynolds.

Cox is a key local partner in the fund that received backing from over a 100 investors worldwide and began buying up properties, mostly in Baldwin County, at distressed prices two years ago to the tune of roughly $60 million.

Near the proposed site on the west side of the Hampton Inn, another condo project is in the works.

Rick Phillips of Gulf Shores, who had been involved with the original Mandolay project, has been marketing his 23-story Junonia Beach Resort over the last year through his company, Southern Advantage Real Estate.

According to the Junonia website (www.junoniabeachresort.com), 57 of the 97 units are still available. In June, Phillips told AL.com that the contruction process would not start until 65 units were presold.