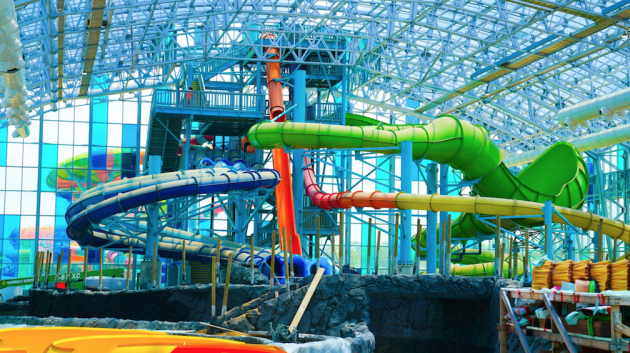 FOLEY, Alabama – Summer is heating up, and it’s that time of year where everyone is looking for ways to stay cool and beat the heat.

While you’re brainstorming, you might want to consider adding OWA’s newest indoor water park to your list.

FOLEY, Alabama – Tropic Falls, hailed as the first indoor water park in the U.S. with a retractable wall and roof, is encased within a 100,000-square-foot facility lined with nearly 2,000 glass panels.

“This is the first of two phases,” said Kristin Hellmich, OWA’s director of marketing and PR. “We’re hoping to have phase two completed by this fall, which will include an outdoor wave pool and an LED screen for movies and performances.”

But in order to get to the park, you still have to go through the amusement park entrance. As of now, in addition to season passes, the only ticket options available are combo tickets for both parks. In addition to creating an exclusive entrance to the water park, OWA is planning to widen the ticket options.

These aren’t the only changes people will see at Foley’s premier entertainment district. If you’ve been to the amusement park, you might notice a certain glow and added luster. Palm trees, colorful murals, and a revamped entrance to the amusement park help set the tone.

“When we broke ground and began planning the indoor water park, we discovered that it didn’t quite connect to the amusement park that opened on 2017,” Hellmich said. “In order to create a cohesive brand, we also renamed the amusement park and attractions.”

Earlier this year, when OWA unveiled its new brand, they also introduced a new toucan mascot and asked for names. What Hellmich described as an interactive experience yielded more than 200 submissions and several votes, they decided his name will be Tuki.

“We feel that Tuki the Toucan really embodies the Tropic Falls experience,” Hellmich said. “Tuki will come out and make special appearances throughout the park and retail shops.”