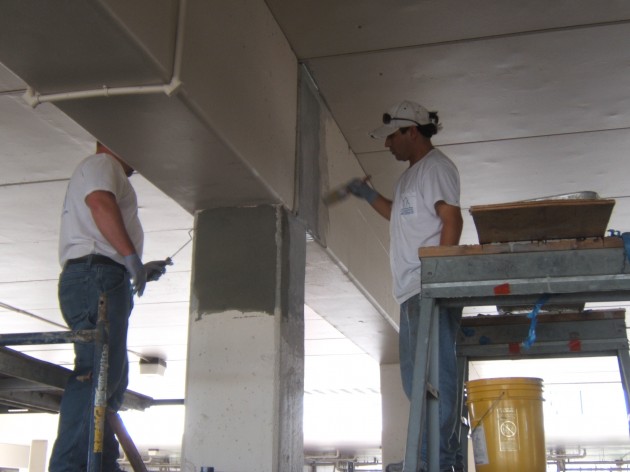 Like other beachfront condominium complexes, Sugar Beach Condominiums in Orange Beach, Ala., has dealt with numerous weather-related issues over the years. Built in the early 1980s, the 198-unit structure began showing the negative effects of age and harsh weather a few years ago. “With the storms and wind force, there’s a lot of movement in the buildings on the beach,” said Robert Stuart, president of the Sugar Beach Condo Owners Association and owner of Sugar Sands Realty. “So, over the years we’ve noticed cracks and other issues.”

Originally, owners believed the problem stemmed from foundation settlement issues. The COA board brought in a structural engineer to evaluate the building, and it was determined that the issue was actually the concrete cracking—or spalling. “The corrosive environment of the beach caused the concrete to spall,” explained Glenn Owen, the board member overseeing the project. “When that happens, the steel reinforcing the concrete beams is exposed. The concrete is designed to protect the steel from the corrosive environment, and it had just deteriorated over a period of years.”

The COA worked with the engineer to develop plans to repair the structural issues and opted for using a carbon fiber reinforcing technique. After bidding the repair work to multiple companies, the COA contracted with C-Sharpe, a local business that has handled heavy commercial waterproof and restoration projects on condominiums along the gulf coast for more than 20 years. “We had been trying to fix our problem ourselves through the years, and it just seemed like we kept making the same repairs over and over, so we were determined to figure out another way to handle it that would be a real solution,” Owen said.

The method used, explained David Sharpe, owner of C-Sharpe, involves applying carbon fiber to strengthen an existing concrete structural member—such as a beam or column in the case of Sugar Beach—so that more load-carrying capacity is created. “With Sugar Beach, we were trying to increase the concrete’s tensile strength so that the beams and columns will have more resistance to shearing where they connect,” he said.

Although using carbon fiber to reinforce concrete structures is not new, it is a relatively new approach to condominium repairs along the coast, Sharpe said. “Carbon fiber has been used for quite a few years in restoration of concrete bridges and parking decks. We believe, however, that there will be a greater need for it as some of the condo buildings along the coast age and need more restoration and repair work. We are actually planning to use a very similar process to repair a larger problem on another building on the Gulf Coast.”

At Sugar Beach, owners are confident they have found the answer for spalling down the road. “We feel like we’re taking a state-of-the-art approach instead of a mend-and-repair approach,” Owen said. “We try to do that in everything we do on the structure. We want to have the best structure we can and have it look as good as possible because that increases our property value. With this, we feel we have a great solution to our problem.”

One Response to Tower Of Strength