Tolls Slashed On Bridge To Alabama Beaches Through Labor Day 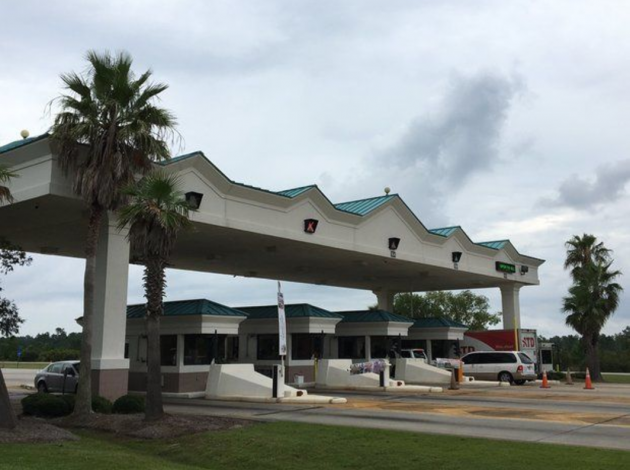 From now through Labor Day weekend, summer travelers who take the Foley Beach Express Bridge to Orange Beach will be paying a lower toll fare.

The one-way toll was lowered Wednesday to $2.75 from the long-time $3.50. Also, the summer rate for Orange Beach residents with an electronic account will be set at $1, or $1.25 if residents pay with cash.

The temporary easing of rates is part of a “Beach Express GO!” campaign that seeks to be more welcoming of high season traffic and take pressure off the jammed Alabama 59.

Said Gulf Shores Mayor Robert Craft: “This is a wonderful alternative and we like this first step. We are still looking forward to a long-term solution that carries us beyond this time frame.”

American Roads’ post-Labor-Day project will create another lane through the existing toll plaza, and install an all-electronic tolling system that the company believes will keep traffic flowing during peak periods.

And American Roads CEO Neal Belitsky said the bridge over the Intracoastal Waterway will be restriped to establish a special center lane that could open — flowing north or south — as demand dictates. He said that in cases of an emergency, such as a hurricane, all lanes could carry drivers out of Orange Beach.

In addition, the company will “lift” the toll completely at times of considerable congestion, such as after concerts at The Wharf in Orange Beach.

Belitsky said the changes will complement the state’s work to widen nearby Canal Road to five lanes. The $17.4 million widening project is expected to be completed within two years.

The electronic tolling, meanwhile, will be similar to what’s in place in states such as Georgia and Florida, but it’s a new system in Alabama. The Legislature approved the framework to create the system during its recent session.

American Roads’ toll lanes at Orange Beach will be electronic collection lanes. Basically, motorists will pay an upfront cost, avoiding having to stop at the plaza. Other motorists can get billed by American Roads after the fact. The new system approved by the Legislature allows video cameras to register every license plate passing through.

Rep. Steve McMillan, R-Gulf Shores, who sponsored the bill, said that the same system could serve other potential toll roads, such as the long-sought $850 million Interstate 10 bridge in downtown Mobile over the Mobile River.

Said Belitsky. “We now have access, working with law enforcement, to get the owners’ identification. It gives us the ability to send a bill to people and collect on passed-through tolls. It helps with the integrity of the entire system.”

Said McMillan: “Keep in mind that it’s just for the service that is being provided. We are not tolling every road in the county.”

Kennon, the Orange Beach mayor, said the electronic system will enable the beach city to be a “virtual gated city,” meaning that it can also help with security by monitoring vehicles coming and going. Kennon denied that the system represented any governmental overreach.

“I’m always concerned about government overreaching in every imaginable way, but when it comes to safety and protection, I think just knowing who is on your island or not, it’s important,” Kennon said. “It adds a quality of life component to the people who live here. And for the folks who visit here, that they know you are coming to a safe and protective place. That’s what we’re trying to create.”

McMillan said that his bill in the Legislature wasn’t designed for security purposes, nor was that discussed by lawmakers. He said, “I don’t recall any asking a question about security.”

Kennon said that the ultimate goal is to eliminate or further reduce the toll costs, which he has criticized as being a particular burden on service workers and residents. The city has pushed for a second, un-tolled, bridge leading to the beaches.

Last November, voters were asked to establish a Baldwin County toll authority oversee possible creation of more toll roads, which in turn would generate rapid revenue for road construction in the booming area. The referendum failed to pass, and McMillan said he doubts that it will reappear anytime soon.

Said Kennon: “Anything American Roads does to help us move traffic and improve the visitor experience and the quality of life for our local residents is welcomed. But it needs to be permanent. This is temporary. So, at least, it’s hopefully somewhat of a picture of what we are trying to achieve long-term.”

He added, “We all know that Orange Beach and Gulf Shores are growing. Traffic will only get worse. We need to plan for the future.”