THE POOL: The Heartbeat Of Any Condo 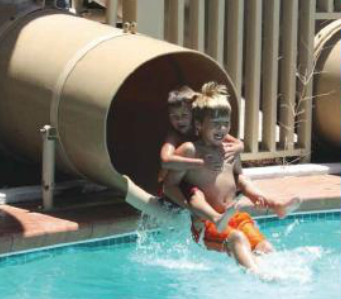 Swimming pools are almost as old as urban civilization itself, dating to 2600 B.C. and one of the world’s earliest major settlements, Mohenjo-daro, in what is modern-day Pakistan.

Called the Great Bath, the ancient city’s pool, which was built of fired and mortared brick and covered with a tar-based sealant, was the focal point of a 5,000-person residential structure not unlike our high-rise condos of today.

Not much has changed about the concept or importance of pools over the millennia. Designed in all different shapes and sizes, pools today add value and status to condominium living, and provide a place for neighbors to gather, interact and cool off from the heat.

“The pool is the first place people go when they arrive,” said Paul Wohlford, vice president of sales and marketing for the Resort Collection of Panama City Beach. “It’s the heartbeat of any resort.”

Wohlford’s group manages six of the most exclusive beachfront properties along the gulf, including two—Edgewater and the Shores of Panama—that boast the biggest pools in the area. “Pools are differentiators for us,” he said. “From a marketing perspective, they’re the best way to promote a property.”

One Of The Greatest Assets

According to Wohlford, whose properties are all located on the beach, most people spend three or four times as many hours at the pool as they do on the beach. “While the beach is our best asset, the pools get a lot more action,” he said. “You’ve got less sand to deal with, less currents, less animals, all the reasons you can imagine.”

The most important amenity for any property, pools drive the value of a condo, whether for sale or rent, according to Wohlford.

Coldwell Banker Sun Vista Agent Gloria Doiron, who’s been a beachfront salesperson and property manager in Florida for 33 years, said that of the 37 luxury condos in her area that have sold so far in 2012, each had a pool. “The only condos that don’t have pools are smaller conversions, which used to be apartment buildings,” she said. Such properties typically “languish on the market” because they lack a pool.

Bottom line? Buyers in Florida demand a pool, even when they’re buying waterfront. Only about 5 percent of condos on the market are without them, Doiron estimated.

But all pools aren’t created equal. Perhaps no one knows this better than Wohlford, whose pools at Edgewater and the Shores of Panama hold about 300,000 gallons each. “They’re our biggest draw pretty much all year round,” he said.

“Two of our pools are zero entry, three are indoor, and four have slides,” Wohlford said. “It’s almost like having a mini-water park right here on site, which means guests don’t have to leave the property to enjoy it. It not only increases the value of the property, but it also increases the enjoyment of owners and guests.”

Another executive who is no stranger to how pools can positively affect a resort’s value is Stan Szapiel, general manager of Caribe Resort, a 26-acre, 600-unit property in Orange Beach, Ala. The Caribe has more than a million gallons and 40,000 square feet of liquid surface area of salt water-filtered features, including 11 pools (six that cascade into each other) and a 980-foot lazy river.

In 2010, after the BP oil spill, Caribe Resort, like many others along the coast, endured numerous cancellations. But a lot of its owners and core users still flocked to the resort, said Szapiel, due in large part to its abundance of on-site water features. “They’re such a huge asset for us,” he said.

Maintaining water features like those at Edgewater, the Shores of Panama, and the Caribe takes a full-time staff dedicated to round-the-clock cleaning and maintenance. Daily duties include washing the tiles down, vacuuming, and monitoring the pools’ mechanized “backwash” systems, which filter water on a molecular level two or three times a day, flushing out all the sediment and impurities from suntan lotion, skin oils, and landscaping debris.

In the off-season, resort staffs go into repair mode, re-grouting and replacing tiles and performing any necessary physical and mechanical maintenance.

“Everybody in our aquatics department is a certified pool operator,” Szapiel said. “The health department inspects our pools once a month. They come out, they do water testing, and we always pass with flying colors. We’ve never had a blemish on our record. We never have cloudy pools. Our pools are always open.”

Such upkeep can be costly. The Caribe recently installed a $250,000 salt-filtration system.

Wohlford can relate. At the behest of the health department, Resort Collection properties recently changed drainage-tank systems, separating them from their pool systems. “There are always issues in maintaining large commercial pools and hot tubs,” Wohlford said.

One issue that will soon affect commercial pools nationwide has to do with recently enacted American with Disabilities Act (ADA) regulations on accessibility of public and private pools, which apply to entities providing a “place of public accommodation,” including some condos and almost all resorts. According to Mandy Eiseman, a business-development representative at Pool Professionals Inc., the new Title III guidelines require two handicapped-accessible points of entry for a pool larger than 300 linear feet and one point of entry for pools less than 300 feet. A handicapped-accessible point of entry generally means a pool lift or ramp.

For applicable condos and resorts without such lifts, they are bound by federal law to add them on or before Jan. 31, 2013, according to J. Christopher Barr, an attorney with Burke Blue, a leading Panama City firm that specializes in condominium law.

According to David Barnett, owner of L.A. Pools & Spas in Gulf Shores, Ala., lawyers for local condos and resorts have explained it to him this way: “Condos that have a front desk and rent rooms are considered public facilities, and will be expected to comply with the ADA mandates. Those that don’t aren’t considered public and won’t have to comply.”

Of course, hotels and resorts are considered public facilities and must comply, Barnett said.

Oddly, it appears the ADA has left a loophole in its Title III guidelines, which have been amended multiple times since they were written in 2010, and have yet to be enforced. According to Barr, an ambiguous clause in the amended regulations makes it possible for some entities to avoid having to make the costly additions to their pools—for now, anyway.

Adding a lift is only mandatory, said Barr, quoting Title III, “to the extent that it is readily achievable to do so (i.e., easily accomplishable and able to be carried out without much difficulty or expense).”

Exactly what conduct is readily achievable will vary depending on the circumstances of each case, Barr said. However, changing economic conditions may be considered in reaching this determination.

In order for a pool lift to be ADA-compliant, it must be able to lift 300 pounds; be submersible 18 inches below water level; have a 16-inch-wide seat with a footrest; be operable unassisted from the water or deck; and not require tight grasping or twisting or more than five pounds of pressure to operate.

To comply with the new ADA regulations, ramps must be slip resistant; have a minimum width of 36 inches, minimum length of five feet, and maximum slope of 1:12; feature handrails on each side; and extend four inches to 20 inches below water level.