Ten Years After It Was Struck Down By Hurricane Ivan, A New Vista Del Mar Condo is Under Development on Perdido Key 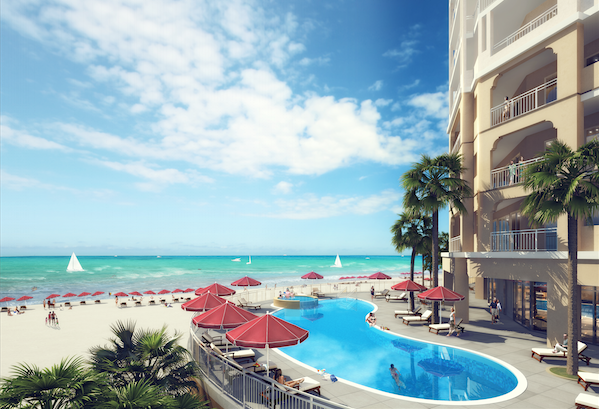 Anyone who lived along or near Florida’s Perdido Key in 2004 still has vivid memories of the destruction that Hurricane Ivan brought to this otherwise idyllic stretch of the gulf coast. But for Curt Boisfontaine, the devastation hit extra close to home.

Five years before Ivan hit, he had purchased a vacation home at Land’s End, a 30-unit condominium located next to Vista del Mar, which was then a 1970’s vintage condominium property on Johnson Beach Road near the entrance to the Gulf Islands National Seashore.

“For many years my family enjoyed Perdido Key and Land’s End’s quiet location on Johnson Beach Road,”Boisfontaine recalls. “The former Vista Del Mar was, I believe, the first condo built on Perdido Key. It was a very unattractive building. However, its location next to the Gulf Islands National Seashore made it a very popular place for owners and renters.”

He purchased a condominium interest in Vista Del Mar from an owner in Atlanta who was not interested in dealing with the aftermath of the storm or the long process of settling up with the insurance companies. After joining the HomeOwners Association (HOA) board of directors, he proposed a redevelopment. For a short time, it looked like the project would move ahead quickly.

“In 2006, Meridian began to move forward with the design and marketing of the new building. Then the economy and the housing market began to collapse in 2007,”Boisfontaine related. “We shelved the project and wrote off the substantial pre-development expenses incurred in that effort.”

Now, with improving economic conditions and a resurgence of interest in gulf coast condo properties, Vista Del Mar is back in the works.

“Meridian and the whole Vista Del Mar family has waited patiently for the market to recover sufficiently to support a new project,”Boisfontaine said. “After a significant redesign of the new building and new marketing efforts we have had a truly remarkable response from those that see the unparalleled value of Vista Del Mar’s location and views. I don’t think there is a comparable offering anywhere along the gulf coast. The new Vista Del Mar, designed by world renowned HKS Architects, offers a very few lucky buyers an unrivaled value proposition with timeless architecture and resort styled amenities.”

Michael McNeil, a developer with JGM Development in Destin, said the level of interest in the new condo and the number of sales prove that the timing is right.

“Curt’s been working on this project on and off for about seven years, and JGM has been involved for almost two years,”he said. “We’ve been watching the market. We’ve seen the decreasing inventory levels of beachfront condos in this area and seen the prices for condos here stabilize and begin to go up. Understanding that it takes 10 to 12 months to get a condo designed, sold and underway, and seeing the improving market we wanted to get started now.”

Creating a luxurious and sophisticated condominium involved a team effort, according to McNeil. Along with Boisfontaine’s involvement in the real estate industry since 1982, JGM has a long history of residential condo development along the gulf coast, from Panama City to Perdido Key. HKS, one of the country’s largest architectural firms, headquartered in Dallas, was selected for its excellent reputation for leading the charge on creating attractive condo units. Rounding out the team are Spectrum Realty and Main Street Properties.

As indicated by architectural renderings, Vista Del Mar will be a 64-unit residential condo project with eight floors of living space and one floor of amenities over a parking garage. The entry level floor will include a grand lobby, a pool and an owner’s lounge. There will also be owner’s storage units (one per condo unit) and a kid’s play area.

“This is a very robust amenity package for a building with only 64 units,”McNeil said. “The amenities really set it apart from other projects on Florida’s northwest gulf coast.“

In designing the interiors, the team sought to extend the luxury and sophistication of the surroundings to the living spaces. To accomplish this, HKS developed innovative floor plans with wider layouts than traditional condominium units to provide expansive views and a spacious feeling of home. Each unit will have 10-foot ceilings and feature the highest level of finishes and detailing, including natural stone flooring, deep crown molding, stone countertops and stainless steel appliances and wet bars.

“We incorporated walk-in laundry rooms and lots of closet space because we envision this to be more of a true second home,”McNeil pointed out.  “We expect that the majority of future residents will be people who want to spend a lot of time here and may choose not to rent their unit.. This is verified by what we are seeing from the pre-sales.”

He added that the building will be rental-restricted, meaning that there will be a minimal rental period of seven days required for any units put on the rental market.

According to Amy Stehmeyer, Director of Real Estate Sales at Spectrum Realty, sales of the Vista Del Mar units have been robust.

“We have seen a phenomenal amount of activity, 50 of the 64 units are reserved, with  $42.6 million in pre-sales,”she said. “We expect to carry the momentum of the 50 into a complete sellout of the building soon.”

A breakdown of the buyers thus far shows that most are from the southeast, with about 20 percent from Alabama, 20 percent from Florida, 17 percent from Louisiana and the remaining buyers from Kentucky, Tennessee, Texas and Kansas.

“Some of the owners of the previous Vista Del Mar condo bought units in the new project, which gave us the springboard for the second tier of sales,”Stehmeyer added. “Also, 75 percent of the pre-sale buyers are saying their units will be their primary or secondary homes.”

Stehmeyer further said the prices for Vista Del Mar units are on the upper-end of the current Perdido Key market, which has been down for the last several years, largely due to the recession of 2007-08.

“Considering the level of finishes, the landmark location, and the amenities, we feel the prices are appropriate and think the market is telling us we are right about this,”Stehmeyer remarked.

Development Ahead of Schedule

Based on the way the sales are going, McNeil said he expects an accelerated development schedule. However, he added that “getting a condo project off the ground is a complex endeavor that requires lots of pieces coming together.”Condo documents need to be prepared, and applications to the Department of Environmental Protection and other governing bodies.

“The construction start date could be as early as the first quarter of 2015, with expected completion in the summer of 2016,”he said. “We anticipate a 15-month construction schedule.”

This is great news for Boisfontaine, previous Vista Del Mar owners anxious to return to the beautiful setting, and others seeking a new vacation home on Perdido Key.

“The attraction of Perdido Key is that it is a quiet place that offers all of the fabulous things that draw visitors, such as beautiful beaches, boating, fishing and golf but without the congestion found in Destin and Orange Beach,”he said. “It is simply a much more relaxing and slower paced destination, but still has plenty to see and do.”