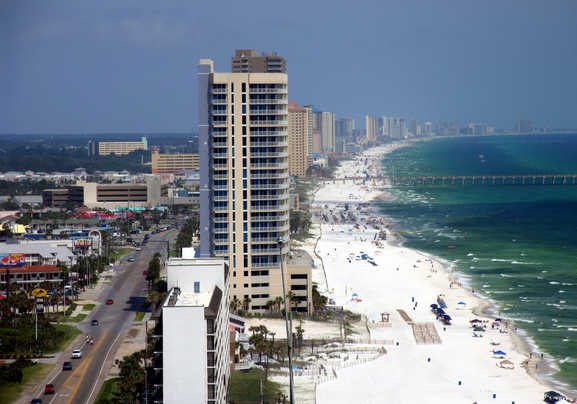 PANAMA CITY BEACH — The Bay County Tourist Development Council (TDC) is keeping an eye on an area of Panama City Beach with slowing growth in visitation.

Despite record-breaking tourism numbers this summer, tourist development tax records show the number of visitors staying in the portion of the “Island” east of Allison Avenue is not increasing as rapidly as areas to the west.

During a recent TDC meeting, Director Dan Rowe pointed out stagnant revenue growth from the east end of the beach over the last three years, while other areas saw a boost in revenue year-over-year.

“If you take a look, every other section had at least $1 million in growth,” Rowe said. “You end up with a lot of growth that’s happening in other parts of the beach, and then the east end is stagnant. It reinforces the concern that that needs to be a focus.”

The east end pulled in $12.1 million in revenue during the 2012 fiscal year, and $12 million in 2013, while the Middle Beach area grew by almost $2 million, followed by about $1 million in growth for each of the other three zones.

“With the new development in the middle part of the beach, especially around Pier Park, the revenues are growing faster because there’s additional product there,” Rowe said. “As we look forward we have to be sure we’re deploying strategies that remind people that Panama City Beach stretches all the way from Camp Helen” State Park to St. Andrews State Park.

Tourist Development Tax specialist Charlene Honnen said the discrepancy could be attributed to higher rental rates at the newer west end properties that come with “all the bells and whistles.”

Although growth is slow on the east end, the area still tops the list as one of the largest collections areas on the beach.

In July, 35.6 percent of revenues came from overnight stays in the Middle Beach area, which spans from Alf Coleman Road east to Allison Avenue. The east end of the beach held second place, with 16.7 percent of collections, followed closely by the Open Sands area, between Powell Adams Road and Alf Coleman, with 16.2 percent. The Pier Park area held 15.9 percent of collections in July, while the west end held 15.6 percent.

Panama City Beach restaurant owner Jack Bishop said despite the new shopping and dining opportunities at Pier Park, the Thomas Drive area is still on the map for many visitors.

“The zone collections report still shows Thomas Drive as being the first or second in collections every time,” Bishop said. “Even though the business is tilted toward Pier Park, Thomas Drive is still doing well in rentals, rates and collections.”

Bishop said his east end restaurant, Captain Jack’s Family Buffet, has also seen a steady stream of customers even with a barrage of new businesses near Pier Park.

“We lost them on the east end and gained them on the west end,” Bishop said. “I’ve been very lucky over there. The Thomas Drive area is still holding its own.”

TDC Chairman Buddy Wilkes was pleased to see revenues steady on the east end, but he encouraged the board continue to monitor the zone.

“If the bed tax revenue is consistent … there isn’t a decline in that, which to me is a good sign,” Wilkes said. “It means that people are still coming and staying on that end of the beach, which is important. We just have to keep our eye on that part of the beach to be sure.”