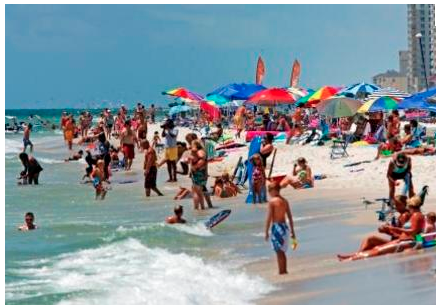 We’ve heard glowingly optimistic projections since the spring, but now that summer tourism numbers have been compiled, it is official that the 2011 tourist season from Panama City Beach to Fort Morgan was the busiest ever. That’s good news for area condo owners, many of whom saw their rentals suffer through two years of economic turmoil in 2008 and 2009 and then dealt with the effects of the BP oil spill in 2010.

South Walton TDC Executive Director Dawn Moliterno said their economic indicators for fiscal year 2011 surpassed the previous year by almost 30 percent. “Our summer was really a record-setting season,” she said. “We had four straight months that we broke records.” Visit Pensacola Communications Director Laura Lee said their tourism indicators show a 30 percent growth from 2010 and an 18 percent jump from 2007, their previous best year.

Unanimously, tourism officials expressed little surprise at the record-setting year. “All of our indicators pointed to 2010 as a record-setting year,” Panama City Beach Convention and Visitors Bureau CEO Dan Rowe said. “For us, unlike some other communities along the coast, 2009 was a record year. We should’ve posted about a 20 percent increase over our 2009 numbers. Then the oil spill happened.” That coupled with a still slow national economy caused PCB tourism to take a hit. “The biggest impact we had in 2010 wasn’t environmental,” he said. “It was the economic uncertainty.”

Malone said their indicators, including reservations and web traffic, also led them to believe 2010 would be a record year along the Alabama coast. Malone makes no bones about the oil having the single biggest impact on Alabama’s loss of tourism, causing some months to take a hit of almost 50 percent below 2009 numbers. “Had the spill not happened, we feel we would’ve seen these numbers last year,” Malone said. “That being said, the rapid pace of recovery from the spill has surprised us. Some pundits told us it would take several years to rebuild the consumer confidence, but they came back this year.”

In an almost perverse way, some officials credit the oil spill with opening up new markets and growing consumer confidence in the area. “We decided we would be out there every day during the oil spill giving daily updates on our beaches via the Internet and social media. If we had oil on the beaches, we told them about – and showed them – the oil,” Malone said. “The honesty we displayed in these daily updates from 2010 earned for us a lot of trust in our visitors’ eyes.”

Maldonato agreed with Rowe that in Okaloosa County, the actual oil had little effect on tourism and the beaches. “We suffered more from the media hype than we did from the oil,” he said. “However, people did discover us for the first time through unfortunate things like the oil spill.”

In Rowe’s eyes, the old adage that any publicity is good publicity has an air of truth about it. “We were able to introduce PCB to new markets last year through the oil spill,” he said. Rowe credits the publicity generated through the live broadcast of the Jimmy Buffett concert in Gulf Shores last year as an important step in introducing area beaches to markets not traditionally targeted by local marketing efforts. “The Buffett concert was off the charts,” he said. “The fact that the concert got almost constant airplay on CMT and on Sirius’ Radio Margaritaville during the summer was a great help to us. It was vitally important to the entire gulf coast region.”

With the 2011 tourist season in the rear-view mirror, tourism officials are looking towards the future with optimism. However, there is one thing that will be lacking in most future marketing efforts to promote area beaches – marketing money from BP. Each tourism official interviewed for this story cited the availability of BP funds to fuel their massive marketing efforts as an important factor in bringing tourists to area beaches. Most of that money is now gone.

The northwest Florida counties all took part in the same settlement with BP, and divided up the marketing money received. “In our settlement with BP, we agreed on a three-year deal,” South Walton’s Moliterno said. “However that deal was heavily front-end loaded. We received almost all the money during the first year. ”

Malone said BP money was instrumental in bringing top-flight concerts to the Alabama coast, with acts including Buffett, Jon Bon Jovi and Brad Paisley. He said it was also instrumental in forging a marketing partnership with the Southeastern Conference. He said he is proud of a number of commercials that began to air during SEC football games featuring former coaches such as Gene Stallings, Pat Dye, Vince Dooley and others touting the beauty of Alabama’s gulf coast.

While each of the areas’ tourism agencies has requests for more funding still on the table, receiving the money is far from certain. Moliterno said their marketing plans that utilized BP funds finishes in April. “We will not receive additional money,” she said. “That money was meant to get the economy moving fast and we think it did.

Even without the aid of more funding from BP, officials are optimistic that the momentum gained in 2011 will carry forward. “We were already on an upward trajectory,” Rowe said. “With Southwest Airlines and the new airport here, we were already targeting new markets through some joint efforts with Southwest.” These marketing efforts go beyond airline traffic, he said. “Although the airline has a flight that goes from PCB to Houston, we were able to track many new drive-in visitors from the Houston area,” he said. “We attribute that to our joint marketing efforts with Southwest.”

Much like PCB, Malone said he expects to continue the momentum from 2011 to carry forward. “We’ve had a very strong fall. In fact, our September numbers are up 7.6 percent from 2009, and we had a tropical occurrence that all but wiped out our Labor Day weekend,” he said. “Our economic indicators lead us to expect our occupancy numbers in January and February to continue to increase. That’s important because our snowbirds talk to their kids and grandkids, who then book us for Spring Break.”

In Okaloosa County, Maldonado said he is not absolutely certain what the future will hold, but he is still optimistic. “We just really don’t know,” he said. One thing he looks for is the average daily rate on condos to go up. “Our ADR took a beating during the spill. We have luxury condos, and they should be at 10 times the rate of a cheap hotel room, not in the same ballpark. As we return to whatever normal is, it may take us years to get back to what it would’ve been had the spill not occurred.”

Moliterno said she knows each year will not be record-setting like 2011, but the key is to take the new visitors and turn them into regular visitors. “Ninety percent of our visitors are repeat. They are loyalists,” she said. “Posting record-setting numbers is not going to happen every year. We know we’ll plateau eventually, and the challenge is to take these first-time visitors and turn them into loyalists.”