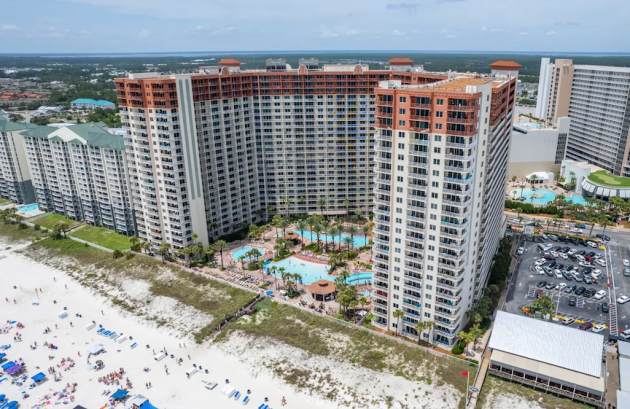 PANAMA CITY BEACH — Shores of Panama condo owners have asked the court to stop their HOA from leveling an $8.9 million assessment against them for what they say is an unnecessary $80 million renovation.

“There’s nothing structurally wrong with that building,” said attorney Dana Matthews, one of the attorneys representing the owners. Matthews represents owners of 58 of the 709 units.

The owners’ attorneys have filed a motion seeking a declaratory injunction aimed at stopping the Home Owners Association Board of Directors from allowing any more work to be done until the court can decide the necessity.

No date for the hearing has been set.

The board leveled a special assessment of $8.9 million against the owners June 7 to pay for some of the work, Matthews said.

John Townsend, attorney for the HOA, did not return two calls from The News Herald in the past week seeking comment.

Neither has Mark McWaters, building official for Panama City Beach.

“I’m only operating off of engineers’ and architects’ opinions,” McWaters told The News Herald in May.

“(He) is not going to be able to comment on the Shores of Panama in that a lawsuit has been filed which names a city employee. Because this is pending litigation, we simply can’t comment,” Ingram said.

She also said that the city will not comment until officials have had a chance to review a new law that went into effect July 1 requiring stricter condo inspections. The new law, however, addresses buildings that are at least 25 years old.

Paradise at a price

While the condos are home to hundreds of people, the Shores of Panama building website lists 150 condos as vacation rentals. The complex boasts “a full-service spa, lagoon style pool, two tiki bars for on-site dining and drinks, and exhilarating water sports and beachfront activities to keep you entertained,” according to the website.

Emerald waters wash up to a sandy white beach seen from behind a balcony railing in most online photos of condos up for sale at the Shores of Panama. Zillow listed 69 condos for sale Tuesday at the 9900 Thomas Drive complex for prices ranging from $350,000 to $850,000. Other real estate web sites listed as many as 109.

But there are problems with the high-rise, problems owners say the HOA blames on Hurricane Michael in 2018.

The seven-member HOA board has dwindled to three, none of whom could not be reached for comment the past two weeks.

Last year the board noted concerns about the building, announcing in December that board members had chosen a general contractor to oversee a roofing project and entire renovation and that insurance would not cover it.

In February, McWaters in a letter told the HOA it had 30 days to initiate a safety plan “to mitigate dangerous conditions.” Those conditions were listed as “cracked anti-lever beams, rusted metal framing and loose and detaching stucco.”

Owners said the board began to sign contracts without telling the owners.

On June 7, the board approved the special assessment against the owners.

Court paperwork filed by the attorneys insists the work the HOA board wants completed is “overpriced, unnecessary and overkill.”

Thus, the homeowners are seeking the temporary injunction, “until the court can hear all the evidence to determine whether any of this needs to be done,” Matthews said.

In the meantime, construction workers already have cut pieces of stucco from the building exterior, damaging “the waterproofing membrane” of the structure, Matthews said.