How Landmark Retail Concepts are Making Waves Across the Gulf Coast 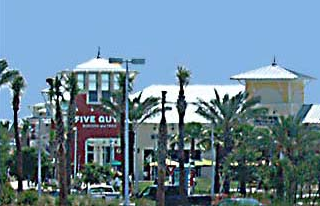 A retail center marketed as a destination. That was the premise behind Destin Commons when it opened in November 2003, according to Kristina Trujillo, director of marketing for the property that encompasses 400,000 square feet of retail stores, restaurants and entertainment, all in a walkable, open, outdoor atmosphere.

“We differentiate ourselves as a destination as opposed to a place to shop,” she said. “We try to offer amenities that other properties (retail) do not.”

And on any given summer day, there is essentially something for everyone from the youngest patrons to the oldest—water play, parks and rides; a stadium theater; national retail chains and a wide variety of restaurant options. Each high tourist season and beyond delivers a multitude of visitors looking for a break from the beach or just another way to enjoy the area. In fact, the development was voted “Best Place to Shop” in Florida’s Panhandle by Emerald Coast Magazine for four consecutive years.

For the retail concept, it has definitely been a win. Trujillo pointed to recent research that reveals that the average shopping visit at Destin Commons runs 23 minutes longer than the national average. Sales have also remained strong through a difficult economy, and overall 2001 YTD revenues are up within the 5 percent to 10 percent range.

For the community, the success of the project comes in the way of tax revenues, jobs and infrastructure to draw more people to the area. Developed by Turnberry Associates of Aventura, Fla., Destin Commons was the first project of its kind across the Florida and Alabama coast, and the success of the venture has certainly caused other destinations to take note.

A number of other similar projects have sprung up in recent years, some claiming the same triumph as Destin Commons; some not. In markets that tout similar tourism numbers and national draw, the question becomes “what causes one venture of this scope to make it, while others struggle?”

“It’s become the benchmark of what to replicate,” Trujillo noted. “Turnberry recognized the value of bringing the concept to the market.”

Simon Property Group, an S&P 500 company and the largest real estate company in the U.S., saw the power of the concept for Panama City Beach. The opening of Pier Park in 2008 was the resulting development that has also realized success in recent years.

“We saw a demographic shift in the market and saw an opportunity to service that demographic,” said Paul Ajdaharian, senior vice president of leasing with Simon Property Group’s Community Lifestyle Division, pointing to increasing numbers and higher affluence coming to the area. “We also saw that was a lack of retail and restaurants to service those demographics. Sales have been above expectations from day one…our occupancy has also been above expectation.”

Offering 1 million square feet of shopping and entertainment, including Jimmy Buffett’s Margaritaville and Buffalo Wild Wings, Pier Park is anchors both the beach and highway. Along with this strong location, Ajdaharian said the project has stayed very strong in its ability to attract national retailers and improve that reach over time pointing to the recent opening of Marshalls (a new construction project) and the ability to draw stores such as Charming Charlies, Ulta and Forever 21.

While national retailers comprise the majority of tenants at both Pier Park and Destin Commons, The Wharf in Orange Beach is nearly 100 percent local tenants, according to Jo Hood, owner of H2O and H.L. Hood, two stores that relocated to the development following its opening in July 2006.

Developed as a combined retail, entertainment and residential project along the Intracoastal Waterway, the project showcases waterfront condominiums, a marina, championship golf, pool with lazy river, restaurants, retail and a plethora of entertainment options including an amphitheater with live performances.

“We were looking at close to 1,000 residents on site. That looked like it had potential from a retail perspective,” Hood recalled. “The potential was huge. There had never really been a downtown Orange Beach.”

However, in contrast to its Destin and Panama City Beach counterparts, The Wharf has struggled against a difficult economy and has not achieved the same traction to keep tenants and build traffic. Hood pointed to lack of strong and consistent backing and a well-developed marketing arm.

Backed by AIG in the beginning, the primary source of capital for the operation went away when the financial institution collapsed. The fact that the project opened in phases did not help to create momentum either, according to Hood, pointing out that developments like Destin Commons and Pier Park were not undercapitalized.

“They built the entire project and then opened. By the time things were ready to sell [at The Wharf], difficulties with real estate had already begun,” he recalled.

Regions purchased the amphitheater, marina and 178 of undeveloped acres last October, and the city of Orange Beach later purchased the 27,000-square foot Wharf Conference Center. Currently (as of late November), contract negotiations were underway to sell the retail portion of the operation.

While the concept of the retail arm at The Wharf was to offer specialty retail as opposed to chains, Hood pointed out that national retail stores have the “staying power” that small, local businesses do not have when times get tough.

Trujillo suggested that Destin Common’s success with national retailers is directly related to the solid track record of Turnberry Associates and its ability to deliver in past projects like Adventura Mall. “We brought in more than 20 stores that were first to the market,” she emphasized, pointing to retail stores like Sephora and Forever 21. “The Turnberry name holds a lot of clout. They trust us—they know we have the sophistication to pull it off.”

In Panama City Beach, Ajdaharian acknowledged that the Simon Property Group name certainly gets a new development into the doors of national retailers, but the success of a project like Pier Park comes down to its ability to assimilate into the community. “We fund regular events at Pier Park to promote loyalty between the community and the project,” he added. “I think that goes a long way.”

Hood emphasized that tenants at The Wharf are hopeful about what the next owner will bring to the table. “The elements are there. We just need to reach critical mass,” he said. “Everyone wants to see this project succeed. With the right leadership, I have no doubt it will.”

In the meantime, a merchant’s association has been formed in cooperation with the City of Orange Beach and the local chamber of commerce. Hood said that the primary strategy is to be a lead voice in the marketing of the property.

“We’ve had no marketing of this property at all for the last two years,” he asserted, adding that success will hinge on an infusion of capital. “We’re excited that we are all pulling together and working toward a common goal.”