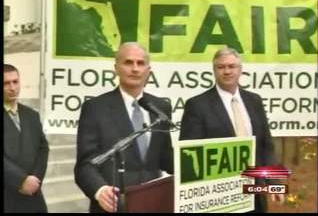 As homeowners’ insurance rates continue to skyrocket along the Alabama coast, residents have banded together to push for industry reforms.  Spearheading the movement is the Homeowner’s Hurricane Insurance Initiative (HHII) that, in addition to serving on Gov. Bentley’s Affordable Insurance Commission, is on a mission to ease what has been deemed an insurance “crisis,” particularly in regards to wind and hail coverage.

“People are desperate and looking for relief,” summed property manager Robert Stuart, Sugar Sands Realty. “When you have people who can’t afford to pay the premiums, they’re going to start seeking relief.”

Stuart noted that rates increased along the coast after Hurricane Opal, a Category 3 storm that directly affected the Alabama coast. But the bump paled in comparison, he said, to the upwards spiral experienced after Hurricane Katrina, even though the most prolific devastation, by far, was dealt to Mississippi and Louisiana.

Worse, many “big-name” insurance companies have since pulled out of the coast altogether leaving homeowners to scramble for coverage, sometimes with non-admitted companies that are not subject to the same scrutiny and regulations as domestic insurers.

Stan Virden, an active HHII member, cited the disappearance of these major insurers as the reason why his own personal residence, with the exception of flood insurance, is now covered through Lloyds of London to the tune of $6,000 per year with an $18,500 deductible.

“I would classify myself as functionally uninsured,” he said.  “If the mortgage company didn’t require it, I would just go ‘naked,’” indicating his preference to become uninsured.

Unfortunately, Virden’s lament is a familiar one along the Alabama coast.  According to Virden, HHII estimates there are some 150,000 households in Baldwin and Mobile counties that are either functionally or literally uninsured. Other homeowners have chosen the insurer of last resort, the Alabama Insurance Underwriting Association–or “Beach Pool” as it’s commonly referred to– which provides “no frills” coverage. But it comes at a price, and a hefty one at that.

“The AAIU is ridiculously higher—20 to 30 percent higher,” said Steve Jones, director of real estate sales at Kaiser Realty, of the AAIU’s rates. The AAIU, known in Alabama as “the insurer of last resort,” openly states on its website that rates “…are generally higher than the average rates offered in the private market…”

But while the problem appears crystal clear, the solution to Alabama’s residential insurance woes doesn’t. That’s why HHII says the first step is to determine how rates for the coast are derived by insurance companies, and is, therefore, supporting the pending Property Insurance Clarity Bill.

“This would require insurance companies to publish data by zip code and risk code, as well as disclose the amounts of premiums collected and claims paid.  That way you can see if the ratio is consistent and distorted,” explained Virden, adding, “We’d like to know if what we’re being charged is just.”

Of particular concern is the models used to forecast future risk of storms and other devastating natural events. Michelle Kurtz, a community consultant with ACT2, a non-profit, church based-affiliate of HHII said, “The models need to be closer to what actually happened” in an area, due to the models’ limitations and proclivity to forecast future events that may, or may not, happen.

To support this argument, Kurtz points to the models’ designer, Karen Clark, who openly addressed their limitations at the National Association of Insurance Commissioners Public Hearing on Catastrophe Models in March of this year.  “She blew the whistle on the insurance companies,” Kurtz said, regarding the usage—or misusage, depending on the perspective—of the models to determine insurance rates.

When asked, local insurance professionals declined to comment on the pending legislation. Off the record, though, at least one expressed concern about the movement’s efforts.  Because many big name insurance companies will no longer write policies in coastal areas, the ones that do currently insure homeowners may pull out if pressed to publicly disclose how they determine rates.

The source explained that many other factors are involved in determining premiums such as whether or not the company offers other types of insurance such as automobile coverage, which does not have the same potential risk as a widespread catastrophe.

“Yes, I suppose it could backfire,” conceded Stuart of the intended outcome, if the Clarity Bill is passed.  Although Stuart himself has been significantly affected by recent hikes and resorted to insuring his house for less than its market value through the AAIU, he acknowledged the many variables involved in insuring coastal properties, citing the effect of global catastrophes on local insurance rates in particular. These types of events affect the cost of re-insurance purchased by domestic companies—essentially a type of catastrophic insurance for insurance companies, which, in turn, affects the costs passed to consumers in the way of premiums.

Florida experienced a similar crunch after Hurricane Andrew, when major insurance companies began pulling out of the state. As a remedy, the government intervened and came up with what is now known as Citizen’s Property Insurance, designed to be “the insurer of last resort,” much like the AAIU. But with one glaring difference: Citizen’s Property Insurance typically offers lower rates than private insurers, which is why Florida’s insurer of last resort is now its biggest. All that may change in the near future, however, and Floridians could find themselves scrambling for affordable coverage.

Amidst rumors earlier this year that Gov. Scott was trying to eliminate the State-run insurance pool, he went on the record, according to the Sarasota Herald Tribune and other media reports, to clarify his position, stating that Citizens had become, in essence, too big and needed to be downsized.  According to an official statement from the governor’s office printed in an April 25 Herald Tribune article, “…the governor has always been clear; he wants a vibrant, competitive insurance market.”
The push continues, however. In July, Citizens Property Insurance CEO addressed the issue, calling for its privatization.

“The problem is, there isn’t anyone running around in Tallahassee with a checkbook with the consumer’s name on it,” said Jay Neal, CEO of FAIR (Florida Association for Insurance Reform), alluding to insurance lobbyists. Still, Neal is keeping a positive, if not balanced, perspective on the situation. “We have to have a robust insurance industry. And it has to be stable,” he said.

But all is not dismal for owners seeking insurance on the coast, particularly condo owners. While residential property insurance seems to be getting more and more expensive, commercial policy rates that typically cover condo associations seem to have fallen recently.  “We’re not where we were pre-Ivan, but rates have gone done,” said Jones, explaining that condos built to recent codes are better able to withstand storm winds and blowing rain, a factor that hasn’t escaped insurers.

Meanwhile, homeowners along the Florida and Alabama coasts continue to seek out remedies in a market laced with dwindling options and uncertainty about what the future will bring. Some say it is, literally, the price paid for living along one of the most beautiful shorelines in the world. And to many, it remains an almost idyllic lifestyle.

“The country at large is having financial difficulty but this area down here is having a good year,” said Jones. “We’re achieving [tourism] numbers we never have before. Insurance is the one thing that is holding back.”  And by all accounts, short of a magic wand, a fast remedy to that “one thing” isn’t forthcoming in the very near future.

One Response to Insurance Reform Initiatives