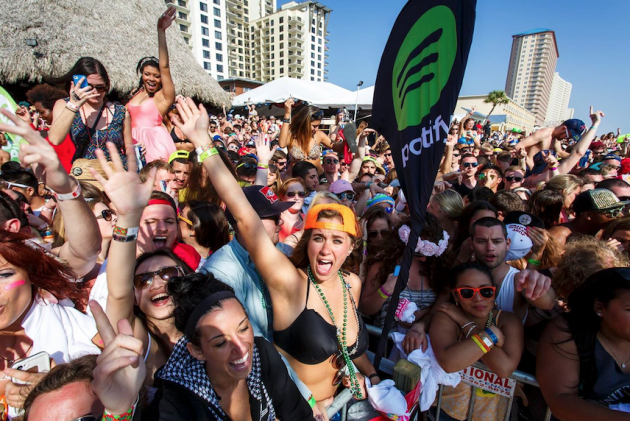 In an effort to repair the negative impact rowdy spring breakers have on Panama City Beach’s reputation and to have it known as a safe and friendly year-round destination-even during Spring Break, the Panama City Beach Council, along with the Bay County Commission, voted in May to permanently ban alcohol from city beaches and beaches in the unincorporated areas of the county during the month of March. March is typically considered the spring break season along the Florida beaches.

The measures include drinking in commercial parking lots and increased fines for open containers. Other measures prohibit balcony climbing and parking after dark in the right-of-way of unmarked or unpaved portions of any scenic corridor. And alcohol sales are mandated to cease at 2 a.m. instead of 4 a.m.

These actions came after an emergency ban of alcohol on the beach was implemented April 1 to April 18 in order to curtail the unacceptable activities that took place among spring break crowds the previous month.

“One of the reasons for the alcohol ban is it sets the tone,” said Major Tommy North of the Bay County Sheriff’s Office (BCSO), explaining that alcohol consumption lowers inhibitions in a drinker, which exacerbates the proclivity to committing crime and acting out in general. “We’re talking mass quantities of alcohol being consumed during this time. The ban gives us a tool to control this behavior.”

Of course, officials and business owners fear that the negative images that made national headlines this year will paint an unsavory reputation that will stick as a year-long perception for the area. But ironically, Panama City Beach Councilwoman Josie Strange said previous favorable coverage of the city to a national audience is a contributing factor to its current woes.

One notable example is the city being

featured as MTV’s Spring Break destination four times between 1996 and 2006. This was not long after Daytona Beach began openly discouraging college students from visiting during spring break with the mayor going so far as to declare on a network morning show that spring breakers were not welcomed. “It was the perfect storm, and 2010 is when the alarm bells started going off,” said North,

referring to the increase in crime and unruly behavior. From 2007 to 2015, according to North, the BCSO experienced a 105 percent increase in calls for service. “At the same time,” he said, “Our budget was being cut due to the (weakened) economy and such.”

But, according to North, new laws and increased funding alone will not solve the problem. “One of the contributing problems is that spring breakers are able to access short-termed rentals, which frequently house an overabundance of students. It can’t just be a law enforcement issue,” he said. “It’s going to take a lot of entities to make it come together. It’s going to take the condo owners to help make it come together through responsible practices.”

Many condo rental companies already have restrictions in place to prevent over occupancy in a condo or beach house. In a released statement, Vice President Lino Maldonado of Wyndham Vacation Rentals said parent company ResortQuest, “is a local, family-centric company and maintains a very strict policy of renting only to those over the age of 25 unless the renter is a married couple or actively serving in our military.” The company said they also thoroughly screen and monitor guests not only “to protect the assets of our owners, but also to ensure that every guest gets to enjoy a great beach experience with us.”

However, Darrell Sellers, of the Panama City Beach Owners’ Alliance and Citizens for Panama City Beach, said, many times, unsuspecting parents will sign off for their college-aged children to hit the beach, not realizing the potential for problems. Meanwhile, because spring break season appeals to a limited crowd, rental rates are kept low. He said that the arrival of the spring break crowd deters others from vacationing at the same time, “so, it’s hard to get the rental rates up.” Moreover, he said, property values are affected, remaining lower than those of neighboring areas such as Destin and South Walton. “Basically, what people don’t realize about the value of condos on the beach, is our condos are priced significantly less than (those) west of us,” he said. “They (the properties) should be appreciating more than they are.”

Of course, there have been media reports that some members of the community oppose the alcohol ban because, they argue that, as with former Florida spring break hotspots, the season contributes significantly to Panama City Beach’s yearlong economy.

Longtime area economist Dr. Rick Harper calls Panama City Beach “one of the most seasonal metro areas in one of the most tourism intensive states,” and said that in 2013, tourism related spending accounted for 38 percent of all taxable retail sales in March, whereas the number dropped to 29 percent throughout the year.

Lauderdale and Daytona Beach now have beach alcohol restrictions imposed year round and their reputations as spring break destination have significantly diminished. Strange doesn’t deny the new restrictions will have a financial impact. “Other destinations did suffer initially,” she said. “But they went on to enjoy an improved image.”

How to accomplish that? Strange, North and Sellers all pointed to the many natural resources and newer, contemporary development features, such as Pier Park and the area’s top notch sports facilites, that should be emphasized rather than marketing the area as a spring break party destination. “We’ve done all this great stuff, but you can’t take away this one negative,” Sellers said of Panama City Beach’s Spring Break image.

And, all emphatically agree that the goal is to have visitors continue to frequent and enjoy the area and success will follow. “This is a beautiful place with a lot to offer, and we want people to come enjoy themselves,” North said.