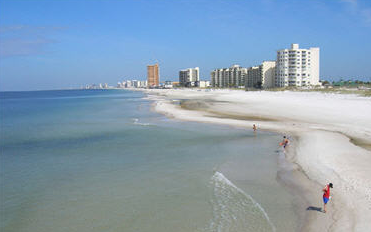 Stable may not be the most exciting word to describe an area’s real estate market, but in light of the economic setbacks of the past few years, the curve ball thrown by last summer’s BP Deepwater Horizon oil well explosion and the current volatility of the stock market, real estate professionals along the Gulf coast are very happy to see stability returning to the market.

“With the economy like it is, stable feels good,” said Amy Stehmeyer, director of real estate sales at Spectrum Realty Alabama, whose main focus is on selling units in the Turquoise towers in Orange Beach. “However, it has recently felt to me like the condo market is improving, and I have now seen statistics that back that up. The inventory of gulf front condos in Alabama is now under 8 percent, which is a very healthy market, in my opinion.”

She added that prices per square foot have held steady since January and are even starting to edge up a little. At the beginning of 2011, the average price per square foot on gulf front condos for sale was $241; it’s now $246.

Stability and a slight uptick has also characterized the broader condominium market in coastal Alabama, according to Dotty Lou Farias, of “The Pro Team,” ReMax of Gulf Shores.
“The inventory of all types, ages and sizes of condos is down throughout Pleasure Island (including Orange Beach, Gulf Shores, Fort Morgan and North Gulf Shores) and demand is up,” she said. “At the end of June, there were approximately 1,300 active condos on the market, the lowest amount since 2005.”

A similar situation is emerging in northwest Florida, according to Gene Ursprung, sales manager for Sterling Realty, LLC., who said closings of condos in Panama City Beach are up by about 40 percent over last year.

“Inventory is down significantly, by about 40 percent from first quarter of 2011,” he said. “The prices have stabilized somewhat and I believe, in the near future, once the rest of the inventory is absorbed, prices will start going back up.”

Time to Jump In?

All along the gulf coast, condo buyers are still seeking bargains, but the opportunity for getting deals may be declining, realtors and lenders report.

“Buyers are primarily interested in deals,” Ursprung said. But, in a strong indication that the inventory is down, they have fewer units to choose from in the low prices ranges these days, he said. “Back in January and February, I could spend a couple of days helping a buyer look at the available properties, now we can get it done in a few hours because of lower inventory.”

Farias pointed out that it is the natural progression of things for the lower priced units to be in the highest demand. “People who previously could not be in the market at all, are getting in now,” she said. “With their savings and stocks not performing and interest rates at an all time low, they see the opportunity to purchase their own piece of heaven here along our gorgeous gulf coast.”

At the same time, she added: “Prices are stabilizing. Most sellers who are not in distress and are ready to sell, understand the market. Therefore, they are pricing their units accordingly.”

Those seeking bargains should note, however, that  prices are inching up for the lower-priced units, Farias said. “I believe that we are riding the bottom,” she remarked. “It is a fluctuating area, not a flat line that you hit and just start bouncing upwards from. Remember that we were selling condos at an average of $380 per square foot in 2006.”

She predicted price increases will eventually spread to the higher priced units as demand continues to rise.

Ursprung said he believes the window for today’s deal is closing. “In Bay County, we are not seeing the ‘shadow inventory’ that has been talked about in national real estate trends,” he said. “People need to understand that if they missed the boat in 2002, the last time prices were this good, they better get in now or they might miss it again.”

A similar sentiment was expressed by a lending professional. “Although there are still some awesome condo deals out there, we have seen a slight creep upwards in prices the past few weeks, said Lesa Gilbert, Team Leader, The Winning Team, at Keller Williams Realty in Orange Beach. “Inventory is declining and of course eventually the market will cycle back into a seller’s market.”

She remarked that condos are selling in all price ranges because there are good values to be had across the board: “One thing we have now in this market is an increase in condos under $200,000 consequently making the pool of buyers larger.”

Gilbert cautioned however that “I don’t know anyone who thinks we will ever see prices as high as we did in 2006 and 2007.”

While foreclosures and short sales have had a dramatic impact on condo sales in recent years, they are becoming much less of a factor, according to Farias.

“I do not believe that short sales and foreclosures are the dominant feature of our condo landscape anymore,” she said. “Today there are about 1,100 condos on the market, with only 85 units being listed as foreclosures or potential short sales, of which only 29 of those are direct gulf front.”

Foreclosures are way down in Panama City Beach, Ursprung said. “At the beginning of the year, there were about 35-40 condos in this area listed as foreclosures, but now there are only 11, and only two of those are high quality properties.”

However, foreclosures and short sales are still affecting the average amount of time to close a condo sale, according to Gilbert. “Even with inventory declining and sales increasing, we have seen the number of days on the market increase at the beach and attribute that to the amount of short sales and foreclosures,” she said. “Short sales typically take a minimum of four months to close from time of contract and can take up to eight or nine months. When banks start an REO (real estate owned) list price too high, it will prolong the sale.”

Gilbert stressed that short sales are still a great option for condo owners who are “underwater” on their condo and need to sell for debt relief.

“Lenders are aware of the downturn in the economy and the hardship many of their borrowers are facing,” she said. “Most of them are eager to do a short sale versus foreclosing and having to take the property into inventory as an REO. I advise my clients to seek direction from their accountant. If condo owners cannot make the investment cash flow and are draining their savings trying to make it work, then a short sale is definitely a good option for them.”

Condos along and near the beach offer an excellent investment option, but financing remains a major challenge for many potential condo buyers, Stehmeyer said.

“Most of the high-end buyers are paying with cash,” she said. “We are seeing some buyers who have gotten mortgages and they are usually looking for units with good rental performance. However, financing is still the biggest challenge for most people interested in this market. Turquoise has been working on a special program with Regions Bank, but otherwise we aren’t seeing a lot of incentives from lenders.”

Ursprung said some condominium developments in Panama City Beach have gotten special designations from Fannie Mae, which allow qualified lenders to obtain a 30-year fixed mortgage with 20 percent down, but most buyers are required to come up with at least 25 percent down on fixed loans of at least 15 years and have a credit score above 720, along with money in the bank. This is also adding stability to the market, he said.

“”Most people now understand that they will have to keep their units at least five years to get a return on the investment,” he said. “Flipping is no longer an option and really hasn’t been since 2005 or 2006. We aren’t likely to see the crazy deals from the recent past anytime soon.”

However, with the turmoil in the stock market, many investors have been turning to real estate, Ursprung said.

“Since 2008, a lot of people have felt that real estate is safer than the stock market, even if they have to hold for five years,” he said. “That’s part of the reason that cash buyers have been such a significant part of the condo market.”

Gilbert said she has always believed real estate will always be a solid investment and would not hesitate to encourage someone to get out of the stock market now and purchase property―especially waterfront.

“There are some great programs out there that allow you to utilize your current investment portfolio, and you can even purchase real estate through a self-directed IRA,” she said. “It’s a great way to grow your IRA!”

Stehmeyer agreed that condo investment trumps stock market speculation: “Most people I talk to feel that the real estate market in this area is much more stable than the stock market, that there is less chance to lose large volumes of money when they invest in condos.”

She added that the gulf coast has not only bounced back from the 2010 oil spill, but may have benefited from the exposure it brought to the area. “Sales were up 24 percent this summer over July 2010, and we’re finding that most investors have moved past that concern and are now returning to invest in gulf coast real estate. Also, the media coverage made more people aware of our beautiful coast.”

Another positive factor for condo sales in northwest Florida is the new airport in Panama City Beach, which recently had its millionth flier, Ursprung said. “The airport is bringing people here who’ve never been before and making us very accessible to people in east cost cities, such as Baltimore, Washington, D.C., New York and New Jersey. It only takes about six hours to get here from Nashville and other Midwest and Southern cities. Together with developments like Pier Park, the airport is bringing new vitality to our area.”