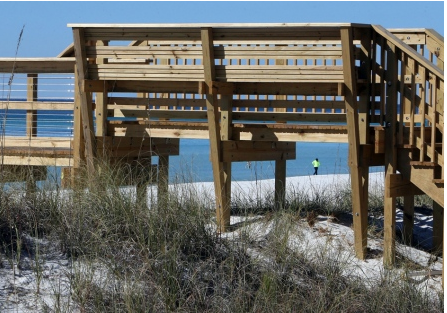 PANAMA CITY BEACH — City attorneys have drafted an ordinance that would ban construction of private walkovers behind homes along Beach Boulevard.

The City Council is scheduled to discuss the proposed ordinance, which describes how the walkovers could be an eyesore, at its Jan. 8 meeting at 6 p.m. at City Hall.

“Given the extraordinary height of the sand dunes south of Beach Boulevard, the council finds that the construction of private elevated dune walkovers will clutter the beach and its views and thus hinder the enjoyment of the beach by those using the existing beach accesses,” the proposed ordinance states.

It also states there already are plenty of beach access points along Beach Boulevard without the walkovers behind the homes, noting that south of the boulevard the city maintains 11 public beach access ways about every 80 feet. It adds that the existence of the access points has been “fiercely guarded by the residents of this neighborhood specifically and city electors generally who have consistently defeated several efforts to relocate or abandon beach easements in this neighborhood.”

The controversy came to light after neighbors recently complained about a wooden walkover built behind a home at 9802 Beach Blvd., which starts behind the house, extends over dunes and crosses state property out to the Gulf.

The walkover railing juts up 6 to 9 feet, and neighbors said it has destroyed their Gulf views.

Property owner Jason Roberts told The News Herald in November that he can’t win. He said he has another rental property where neighbors have complained that tenants were trampling through the dune sea oats and he could have faced fines from the Florida Department of Environmental Protection (DEP).

In this case, he said, he hired a walkover designer for the $18,000 project who previously had worked for DEP, which issued permits for the walkover.

Roberts said he can understand why some neighbors are displeased about what the walkover is doing to their Gulf views, but he was simply following DEP design standards and regulations.

“I do understand all the sides,” he said. “I feel for those (neighbors). I’m caught in the middle.”

Panama City Beach Planning Director Mel Leonard said in a previous interview that what makes this walkway different from others on Panama City Beach is its height and distance, which is related to the fact the walkway goes over dunes. The shoreline along Beach Boulevard has more dunes than other areas of the island, which means the walkovers will end up much higher than those built on other beaches, he added.

Beach Councilman Rick Russell, who proposed the ordinance, said this week he empathizes with the neighbors’ concerns and said there are plenty of beach accesses along that street so the walkovers going to the water aren’t necessary.

The walkover “to me seemed a little bit intrusive to what we want the beach to look like,” he said. “I personally don’t want to see a bunch of large walkways lining the beach. I think that is a little unsightly.”

He said the wood from the walkovers also could wash into the homes if three is a strong storm or hurricane.

for the walkover, so there is nothing that can be done to remove the walkover that has been built.

“They did it legally,” he said. “They followed all the right steps.”