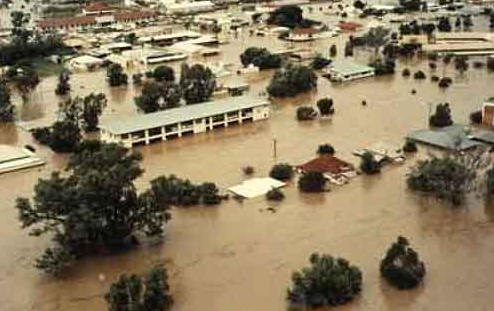 Many coastal-area homeowners hit by waves of property insurance increases in recent years should get ready for another pounding.

A new federal law is threatening huge hikes in flood insurance premiums for certain homes and businesses when it kicks in this year and next.

The law, called the Biggert-Waters Flood Insurance Reform Act and passed last July, is an effort by Congress to recover losses to the government’s National Flood Insurance Program – largely from Hurricane Katrina in 2005 – and to make the program financially sound, said Spencer Rogers, a coastal engineering specialist at N.C. Sea Grant.

As private insurers dropped out of the market, the government developed its program to make sure that people who live in flood plains have access to insurance.

Under the new rules, subsidies that homeowners have enjoyed on the government’s program since the mid-1970s will go away, substantially raising premiums for second homes and investment property located in flood zones.

It’s not clear how newer primary residences will be affected when the law is implemented.

Additionally, buildings that were built up to snuff in previous years and to the standards of flood maps then will now be measured against the latest flood maps and may now be in flood zones when they previously were not.

Newly constructed structures are being already to current standards, and may be less affected by the changes.

Reaction to the flood insurance changes was anything but understated.

“It would have a catastrophic effect on homeowners,” said Wrightsville Beach Mayor David Cignotti. Unless the building is a primary residence, “people might have to sell their property. It’s too big of an increase at once,” he said.

At North Topsail Beach, like other beach communities, a great many of the residential properties are second homes or investment properties rather than primary residences.

In the face of such significant changes, he said the flood insurance program should take into consideration investments communities have made to protect properties from flooding. North Topsail Beach just completed a channel realignment and beach nourishment project that added protection along New River Inlet.

“They really need to take into consideration what actions communities have taken to protect property,” Tuman said.

So when will the new rules take effect?

“The only thing FEMA has said is that something will happen Oct. 1,”said Spencer Rogers, coastal engineering specialist with N.C. Sea Grant, who has studied and analyzed the new law’s potential effects, which only now seem to be emerging in public discourse.

But owners of structures that are not primary residences that were built in a flood zone before Dec. 31, 1974, could see their premiums go up 25 percent the next time their policy is up for renewal, Rogers said.

It is uncertain what the effects will be on homes built after that date, but more guidance is expected from FEMA by April, he added.

The act removes two so-called grandfather clauses that have effectively subsidized rates, and the result will likely be very expensive for property owners in or even near the 100-year flood plain shown on flood maps, Rogers said.

“It’s going to be a tough hit,” said Royce Bennett, president of the Jacksonville Board of Realtors.

In addition to homeowners who have already been paying flood insurance who may be impacted, there could also be homeowners who were not in a flood plain under old maps but now have to pay the price.

Owning a home remains a person’s best investment, Bennett said, but insurance is an increasing cost to be considered. The flood insurance hikes come as coastal homeowners in North Carolina also face an increase in July.

“Owning a home is the best investment a person can make but there are certainly comes with associated costs to be considered,” he said.

And any increase in the cost of owning a home impacts the real estate market, he said.

Steve Candler, CEO of the Brunswick County Association of Realtors (BCAR) said the increases would affect the property market.

“A wise man would open up a business jacking up houses,” he said only partially in jest. “It would be an expensive process, but it could save a building owner $10,000 to $12,000 a year in lower insurance premiums.

Candler also said that flood insurance would no longer be transferable to the next owner at low rates.

Instead, a survey would need to be conducted as the house changes hands to determine the home’s new status and rates.

“Flood insurance is going to be a huge investment,” he said.

The new flood insurance rules could even hit Fannie Mae, said Oak Island Mayor Betty Wallace, because some second-home owners won’t be able to pay flood rates and will default on their mortgages.

Some homeowners could be tempted to drop their flood insurance altogether. But homes in flood plains are required to have flood insurance if the mortgage on them is backed by government entities like Fannie Mae.

In a related twist, the Town of North Topsail Beach has been working to fix a decades-old mistake so homeowners can participate in the National Flood Insurance Program.

U.S. Sen. Kay Hagan recently introduced legislation that would correct an inaccurate Coastal Barrier Resources Act map that mistakenly designated an area of North Topsail Beach as undeveloped. The error, she said, has resulted in many homeowners in the town having to rely on costly private flood insurance.

While legislation would make it possible for them to participate in the NFIP, the rates are going up.

Tuman said the higher coast be more than what people are willing to pay, keeping them out of the market.

“The high coast of flood insurance may discourage people from buying,”he said.

It has been one blow after another for coastal homeowners when it comes to insurance.

“I’m always disappointed to hear about rate increases. These increases on top of the coastal insurance increases make it very tough on our homeowners,” said Emerald Isle Mayor Art Schools.

The first is a break for structures built before Dec. 31, 1974, or the date of the first flood insurance rate map (FIRM), whichever is later.

Neither homeowners nor wind and hail policies cover flood damage. American insurance companies have not written flood insurance policies for decades. The expense of the claims – and especially how they can be bunched together in a short time – led them out of the business, said Spencer Rogers, coastal engineering specialist with N.C. Sea Grant.

The federal program came about to insure homes in flood plains across the country, including those along rivers and other streams.

The flood program offered flood insurance at subsidized rates for all buildings – including pre-FIRM ones – if a community was willing to adopt higher flood standards on new construction after a 100-year flood map was implemented, Rogers said.

The Bigger-Waters Act leaves the subsidized rates in place for primary residences built before Dec. 31, 1974, but there are major exceptions – including houses that are newly purchased, not previously insured or with temporary policy lapses.

Another grandfather clause involves how rates are calculated on post-FIRM buildings.

Premiums on those buildings until now could be calculated using the flood map in place when the home was constructed – when, for instance, base flood elevations were lower or before flood zones were expanded. Those map conditions could be used to calculate future premiums, even if the zone or base flood elevation were changed in a later map, Rogers said.

The new law, however, provides that all buildings will be rated using the latest maps, he said.