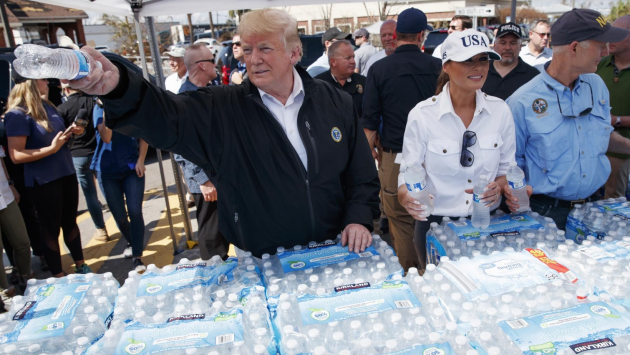 LYNN HAVEN — President Donald Trump and first lady Melania Trump both got a bird’s-eye and ground-level view Monday of the havoc wreaked by Hurricane Michael as it smashed across the Northeast Florida Panhandle and into Georgia last week.

Along with Florida Gov. Rick Scott, Federal Emergency Management Association officials and Mayor Margo Anderson, the Trumps toured a neighborhood in the hard-hit town of Lynn Haven, where the damaged roofs of many homes were covered with blue tarps. The scent of pine sap from broken trees still filled the air.

“To see this personally … total devastation,” Trump said as he walked through a residential area along 7th Street.

The storm cut a damaging swath through that section of residential Lynn Haven, where snapped power poles and downed power lines lay along the streets among limbs and vegetation blown off trees by Hurricane Michael, which made landfall Wednesday along the northeastern Gulf Coast.

“It was almost like a giant tornado — a really wide tornado,” the president said in describing the hurricane.

Among the people the Trumps and Scott visited Monday during their quick tour was Michael Rollins, a white-haired gentleman who rode out the storm with his pets. Standing in front of his house, its roof covered with blue plastic, Rollins spent several minutes talking with Trump and the other officials who toured the neighborhood.

At one point, Rollins told Trump about the tree that narrowly missed his home when it fell.

“It just about got it,” Trump said.

Rollins told the Trumps, Scott and the FEMA workers that the city’s response to the hurricane has been heartwarming.

“The whole community has come together,” he said.

The Trumps arrived at Northwest Florida Beaches International Airport in Panama City on Marine One, the presidential helicopter, shortly before noon Monday, accompanied by three Marine Corps MV-22 tilt-rotor aircraft loaded with representatives of the national media. The president and first lady initially arrived in the area aboard Air Force One, the presidential jet, which landed at Eglin Air Force Base in Fort Walton Beach shortly after 10 a.m.

Awaiting the president’s arrival on the tarmac at the Panama City airport were Mexico Beach Mayor Al Cathey and Panama City Mayor Greg Brudnicki, both of whom lead cities heavily damaged by Hurricane Michael. National media representatives flew over Mexico Beach before landing at the airport.

After a 20-minute motorcade from the Panama City airport to Lynn Haven, the Trumps spent about 40 minutes in the town before returning to the airport and boarding Marine One bound for a similar tour somewhere in Georgia, where Hurricane Michael also caused considerable damage.

The route from the airport to Lynn Haven provided a hint of the extent of damage later seen in the city. All along the motorcade route, uprooted and snapped trees lined the roadway, and at least two utility crews were working to restore electrical power.

After visiting residents at their homes, the Trumps toured an aid distribution center in Lynn Haven where local volunteers were cooking meals and handing out water. Parked amid the tents pitched across the in-town parking lot was a FEMA vehicle, outside of which sat a number of FEMA personnel, speaking individually with victims of the hurricane.

“These are the people that make it work, and they make it work beautifully,” Trump said, gesturing toward the FEMA personnel.

Asked during his tour of Lynn Haven to compare Hurricane Michael with other recent hurricanes, Trump suggested it was the worst in recent memory.

“Look behind you,” he said, gesturing to the heaps of fallen trees and snapped power lines surrounding the impromptu distribution center. “This is incredible.”

“We’re doing a lot … more than anybody would have ever done,” he said.

After meeting briefly with the FEMA personnel, Trump rounded the corner at the front of the vehicle, and the hundreds of people visiting the impromptu distribution center broke into cheers and applause. Trump and the first lady spent a few minutes handing out bottles of water as dozens of people, with cell phones held high, worked to get a memento of the day the president came to town.

Throughout the president’s trip into and out of Lynn Haven, people at intersections blocked for the motorcade, and elsewhere along the route, stood cheering and waving as the president passed by.

Trump left Lynn Haven with an optimistic thought, saying he expected that it wouldn’t take long for people to start rebuilding their homes, businesses and lives.

“Thirty days, you won’t even recognize it,” he said.