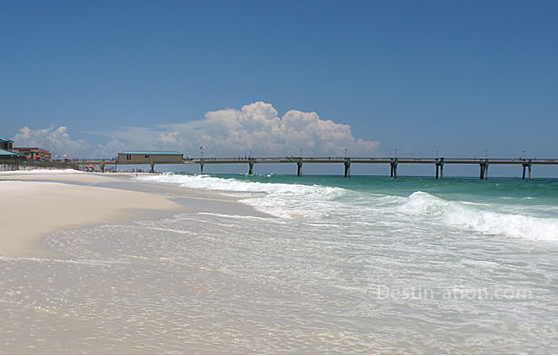 After more than four years of debate, this year’s tourist season will kick off without the contentious matter of beach renourishment looming over Okaloosa County.

Fears of dark, shell-heavy sand being dumped on Okaloosa Island’s white beaches have been put to rest.

The fees charged to pay for additional sand have been abolished, and the project’s key opponents have said they will end their fight in court.

Yet, not all county leaders are comfortable with where things stand.

“I’m not 100 percent sure we made the right decision,” Okaloosa County Commission Chairman Don Amunds said Wednesday. “We did the right thing based on the information before us. We kind of made the decision based on … praying for no major storms.”

Commissioners on Tuesday dropped plans to renourish the Okaloosa Island beach. In a 3-2 vote, the board killed the long-debated $12 million restoration project, which would have added more than 900,000 cubic yards of sand to a 2.9-mile stretch of shoreline. Commissioners James Campbell and Dave Parisot voted against ending the project.

The board also voted 4-1 to eliminate the Municipal Service Benefit Unit, one of the major funding sources for the project. Camp-bell voted against ending the MSBU. That vote left intact the Destin MSBU, which is a major source of funding for the proposed $8 million renourishment of 1.7 miles of beach in the west Destin area.

The pivotal decisions came after a three-hour public hearing in which dozens of residents, business owners, snowbirds and other annual visitors urged the board to abandon Okaloosa Island renourishment.

“It’s kind of bittersweet,” Commissioner Bill Robert said. “I’ve been a strong supporter of beach renourishment, but I’m a much stronger proponent of the bonds we’ve built in our community. I think the misinformation and the misrepresentation of facts were dividing the community … and that’s the only reason I voted against it.”

Roberts said opponents of the project sold a “theory of brown sand” to the public and caused a huge rift in the local community.

He added that he believes renourishment would have helped protect homes and businesses on the island and that the project would have used quality sand.

“I believe beach renourishment is going to be needed (in the future),” Roberts said. “I’m thankful we did get the DEP permit.”

That permit from the Department of Environmental Protection, awarded to the county Dec. 30, allows Okaloosa to move ahead with a restoration project any time in the next five years.

Or, as Roberts pointed out, a new mix of county commissioners — after two new board members are elected in November — could change the board’s position in 2013.

In the past six months, controversy has increased as opponents of the project ramped up their criticism.

The project has been in litigation since April 2010, when island residents David and Rebecca Sherry challenged the county’s application for a permit. They have accused the county of having plans to put inferior sand on the island and argued that the project would hurt tourism.

After Tuesday’s commission meeting, the Sherrys praised the board for dropping the project and killing the MSBU.

“We think the commissioners made the right decision and we owe a debt of gratitude to them,” Dave Sherry wrote in an email to the Daily News on Wednesday. “(Tuesday) night the commissioners gave everyone who came the chance to speak, and they listened, which is how representative government is supposed to work.”

Although the Sherrys recently appealed the DEP’s decision to award Okaloosa a permit for beach restoration, the couple said Wednesday they do not plan to keep fighting the issue in court.

“We believe the decision to keep the permit alive was well-intentioned,” Sherry wrote, adding that they plan to stay vigilant to protect the quality of the sand on Okaloosa’s beaches.

As of December 2011, the county had spent an estimated $1.2 million fighting the beach restoration issue in court. About $210,000 of was from bed tax revenue and about $1 million was from property tax revenue, said Gary Stanford, the county’s finance director.

In the next six months, county officials will work on calculating the MSBU refunds due Okaloosa Island property owners. Commissioners directed their staff to refund the fees by June 1.

“We’re going to do our best to refund everybody’s money, plus interest,” Amunds said. “I think in these economic times, those people will be thankful. But they gotta weigh that out — being thankful now versus what might happen in the future.”

Under the MSBU, which was approved in 2009, about 3,800 properties on Okaloosa Island and 3,100 properties in Destin have been assessed annual fees to help pay for beach restoration.

The county’s other two sources of funding are an estimated $2 million a year from 1 cent of the bed tax levy and about $7 million in state revenue. County officials have said they expect the state revenue, which would have been used to fund only the island project, to disappear now that the project has been canceled.

In addition to calculating refunds, the county will begin talking to Destin officials about taking over the permit for the proposed $8 million renourishment project there. The county and the city will work on drafting an agreement to allow the project to move ahead.