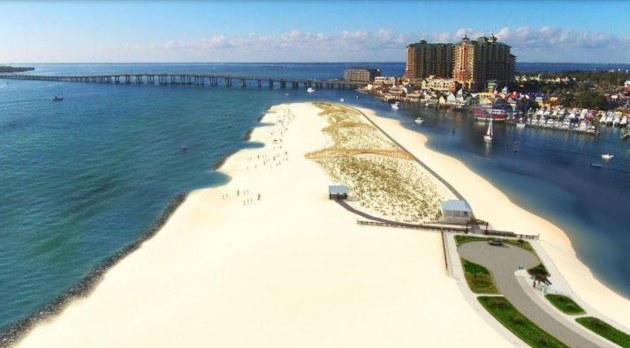 Officials with the Florida Department of Environmental Protection and the city of Destin met with members of the public Tuesday night to reveal plans for the next phase of the Norriego Point restoration project.

The plan includes stabilization, erosion control and new design elements for “passive recreation” activities. Renderings of the project depict the point extending several feet out, which officials say will restore 1,150 feet of shoreline and 5.4 additional acreage.

“I think the restoration of the point will not only bring it back to like it was many years ago, but it will protect the interests of the harbor from erosion and it will provide access for everybody, including people with disabilities,” said Pearce Barrett, project manager with the FDEP. “There will be more shoreline, more areas for swimming and pathways for people to get around on it and enjoy it more.”

The construction design includes a sheet pile wall that will make up a “sand tight” structure along the tip of the point. Officials say that serves to prevent erosion and to ensure the restoration is long-lasting. Boats will still be able to pull up along the beach on the harbor side of Norriego Point, but only in select spots on the East Pass side.

There will be swimming embankments on the East Pass side, along with an American with Disabilities Act-approved shelter and restrooms, increased parking and bike racks, boardwalks and dune crossovers.

“I’m delighted with the plans,” said Destin Mayor Scott Fischer. “It looks like they are trying to leave this area in as much of a natural state as the can. This is the last virgin land, the most decent sized piece of land that reminds you of what Destin was like 40 years ago.”

The restoration project is being funded with BP oil spill money, and as such is focused on restoration that will allow more residents and visitors to enjoy Norriego Point, according to Barrett. One of the benefits of the restoration is that the city will not have to dredge as frequently to keep erosion from choking up the Destin harbor.

“The project had to have a restoration component. Florida received damages (from BP) in areas of environmental recreation and restoration,” Barrett said. “The damage Florida incurred was the loss of recreational use.

“Therefore, not only would we be doing stabilization, but we also … would then increase access for all people and all abilities.”