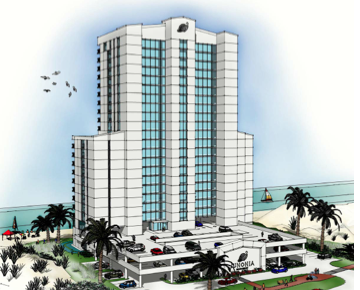 For the first time since the recession brought a halt to beachfront condo construction, a new high-rise condominium is under development along the Alabama Gulf Coast.

Junonia Beach Resort will include 97 units on 20 floors, with an additional three levels of amenities and covered parking, and will be located in Orange Beach, on the beach highway (Alabama 182) directly to the west of the Hampton Inn and to the east of The Breakers, according to Rick Phillips, a real estate developer and broker based in Gulf Shores.

As of mid-March, there were 59 units still available, ranging in pre-construction prices from $575,000 for condos on the lower floors to $990,000 for the last of the three penthouse units on the market. Phillips said he and his development team believe “there may be pent-up demand for brand new condos on the beach.”

“The decision to launch the project was based on our research and what we see going on in the local marketplace,” he explained. “There is now a shortage of inventory when it comes to beachfront condos.”

The only high-rise condo to have been built on the beach in recent years is the Phoenix West II, which only has one unit left to sell, he added.

Phillips said the interest he has seen in Junonia could be a sign of a changing marketplace for condos along Alabama’s coast.

“There does not appear to be a significant number of beach-front condos being sold at short sales or foreclosures in this market,” he pointed out. “A few might pop up from time to time, but generally it appears we are past that stage and the condo market is getting back to normal market conditions.”

Pre-construction prices for units in Junonia reflect the current market for high-end beach-front condos, he added.

“Looking at the market in general, we tried to price Junonia at a price that is competitive with comparable high-end beachfront condos in this area,” he said. “In the marketplace today, buyers are looking at locking in a good price for a great location, and we believe that investors in Junonia will realize a gain, as coastal real estate has stabilized and is gradually rising in price again.”

“This is a small package with a lot of dynamite,” he asserted.

“First of all, the location is superior,” Phillips said. “This is a pristine area of the white sand beach, with all units overlooking the Gulf of Mexico and all amenities providing a view of the gulf, while also offering the convenience of having a great shopping center just across the street.”

This easy access to The Shoppes at Palm Point, which includes a Publix super market and pharmacy, along with restaurants and retail stores, is a big selling point, according to Phillips:   “Being able to just walk across the street and get most anything you need is a great asset when you’re on vacation. When people come to the beach they usually don’t want to have to spend time driving around to get supplies.”

He pointed out that Junonia will offer three levels of reserved, covered parking, with up to two spaces available per unit, at $10,000 each.

Architectural drawings of Junonia show a streamlined building, with a modern flair. Phillips said the plan is for the building to have a white exterior, with expansive colored glass windows.

He emphasized that the structure will have the best and latest safety features. “From a safety standpoint, the building is the first in the area that complies with the latest International Building Code standards established for coastal development in 2012, since this is the first coastal structure to be built along the Alabama coast since the new code went into effect.”

The architectural design also protects owners and renters from the elements, Phillips pointed out,

“One of the nicest features, in my opinion, is that when owners and guests take one of the building’s two high-speed elevators to their floor, they will step out onto a circulation deck that is enclosed in glass, so they will have a great view and be safe and protected from the elements in the temperature-controlled environment. There are not a lot of condos in this area that offer this.”

Designed to offer plenty of on-site options for recreation, Junonia’s amenities, all of which will provide a view of the gulf, will include indoor and outdoor pools, along with an indoor/outdoor lazy river, a fitness center and grilling area. Additionally, there will be a multi-purpose room, also with a view of the gulf, that can be used for parties, family reunions, weddings and business meetings.

“The thinking that went into this process by our development and design teams was that most of the people buying these units are likely to be people who want a second home or vacation home, and people who want to put their unit into a rental program as well as use it themselves,” Phillips said. “The feeling was that these people would want a strong amenities package and so we included a number of on-site attractions, in addition to the 254 feet of beach frontage right on the Gulf of Mexico.”

“One thing that sets this project apart,” he added,” is that it’s fairly low density at 97 units, while having many of the same amenities of much larger projects having 200 – 300 or more units.”

Designed to maximize the view of the beach, all Junonia units will have eight-foot balconies and walls of glass extending from ceiling to floor and wall to wall in the living rooms and master bedrooms.

With some variation in floor plans, all units have three bedrooms and three baths or four bedrooms and four baths, with two of the three penthouse units having five bedrooms. Interiors will have nine-foot ceilings with standard features that include ceramic tile in the foyer, kitchen, living room and bathrooms, carpeting in all bedrooms, white cabinets and granite countertops in the kitchens.

In order to protect the ecosystem of the dune area in front of the condominium, an overwalk will take guests to the beach. Additionally, all units will feature a Coastal Green Air Energy system, which includes thermostats that sense when the sliding glass door is open and adjust the temperatures to lower energy use, as well as door monitors and motion detectors that return to default settings when the units are empty for periods of time.  Phillips said people who have used this system have experienced savings in energy costs of 25 to 30 percent.

Phillips said he has been asked by many people about the name of this project.

“Junonia is the name of the official state shell of Alabama,” he explained. “Specifically, the shell we refer to is Johnstone’s Junonia, which is found only in Alabama waters and was named in honor of Kathleen Yerger Johnstone, an amateur conchologist from Mobile, who made seashells popular through speeches and books. It’s a unique and special shell, and we believe this is a unique and special development for our coast.”