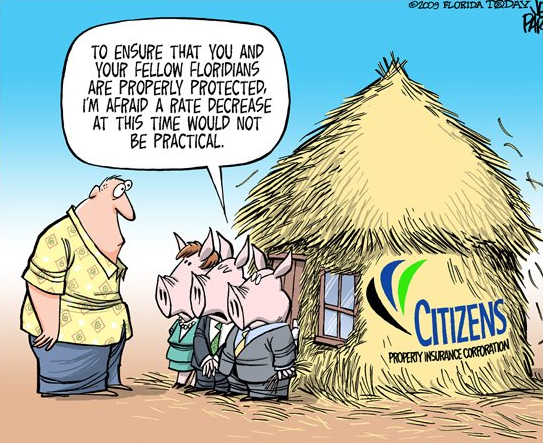 Spiking property insurance costs for many Florida beachfront condominiums could drive down the number of vacation rentals available, undermining the tourism industry that has been a linchpin of Florida’s fledgling economic recovery.

Facts At A Glance:

The issue: New Citizens Property Insurance rules for condominiums with units that rent for less than one month

The details: Any condo complex with more than 25 percent short-term rentals will now be considered a commercial operation and Citizens will cap coverage per building at $1 million.

The fallout: Since many condo buildings are valued above $1 million, residents will be forced to get additional insurance from the unregulated “surplus lines” market, where rates can be 400 percent greater than Citizens

The timeline: Citizens board of directors approved the plan last month. It will be submitted to the state Office of Insurance Regulation for review within the next two weeks and OIR has 45 days to make suggestions.

The process: As policies come up for renewal, Citizens will discontinue coverage for any condo complex with more than 25 percent short-term rentals. The insurer will rely on condo associations to self-report their percentage of rentals and follow up with inspections. Associations will receive a 100-day notice that they are not being renewed, during which time they can apply for $1 million in coverage per building under Citizens commercial insurance program and additional private insurance coverage.

Condominium associations on Siesta Key and in other coastal areas are considering new restrictions on renting to avoid dramatic increases in insurance premiums brought on by changes to how state-run Citizens Property Insurance Corp. covers buildings with short-term rentals.

The anxiety gripping island condo owners — typically a relaxed, flip flop-wearing crowd more concerned with planning the next potluck luau — stems from a new Citizens rule approved last month that shifts condos where more than 25 percent of the units are used for short-term rentals into the commercial insurance category, which limits coverage to $1 million per building.

Because many condo buildings are valued far above $1 million, owners will be forced to obtain the bulk of their insurance on the unregulated “surplus lines” market, where rates can be 400 percent greater than those charged by Citizens.

Insurance agents say individual premium increases could range from a few hundred to thousands of dollars per year.

Rather than pay up, some condo associations are considering capping the number of short-term rental units to retain the cheaper Citizens rate.

The 166 condo owners at Siesta Key’s Excelsior pay $600 a year each for insurance. But that could increase by more than $2,000 under Citizens’ new rules, said resident Walt Olson.

It is a cost many residents say they cannot afford. “That’s a pretty big deal,” Olson said.

In response, Olson may recommend changing Excelsior’s association rules to limit the number of short-term rentals to 41 units, down from the current 72.

The dilemma illustrates how integral property insurance is to Florida’s economy, and the broad impact when Citizens — the state’s largest insurer with 1.5 million customers — changes course.

It also points to a fundamental contradiction as state leaders talk in one breath about the importance of driving economic growth — which in recent years has relied on the tourism industry’s strong rebound — and in the next pledge to shrink state-run Citizens.

During the past year, Gov. Rick Scott and other top state leaders have sought to reduce coverage provided by Citizens and push more policies into the private market, even if it means higher rates for many property owners.

They argue that Citizens is a huge financial risk for every Floridian because the company can tax most insurance lines in the state — auto, property and even pet policies — to pay claims if it runs out of cash after a major disaster.

Consumer advocates contend that threat is overblown and that Citizens is actually better poised to handle disasters than many private companies. Over the last six years — an unprecedented stretch without a direct hurricane strike on Florida — the company has built up more than $6 billion in cash reserves and a good credit rating. Citizens can now handle a repeat of the record-setting 2004-05 hurricane seasons without resorting to premium taxes.

Reducing the availability of beachfront rentals could especially hurt coastal resort destinations such as Siesta Key, which depend on condos to offset the absence of large hotels.

“Keep them coming; don’t slow it down,” Mettille said.

Illinois resident Wendy Chapman, 44, began searching for a two-bedroom condo rental in early January in anticipation of a weeklong spring break trip with her two daughters.

But after contacting 10 different places and finding no availability, Chapman settled for a five-day stay at one of Siesta’s small hotels.

Reducing vacation rentals “will just make it even harder to book something and it will have an impact on all the restaurants and businesses,” said Chapman as her daughters dug into a pizza on the outdoor patio at Napoli’s in Siesta Village.

Citizens now writes 26,600 wind-only condominium policies across the state. The total replacement value is $100 billion, with about $55 billion of that liability for buildings valued above $1 million.

The rates charged to these condo owners are 80 percent inadequate, according to Citizens estimates, meaning the company collects only enough in premiums to cover 20 percent of the replacement value.

Shifting more of the condos into commercial status, and surplus lines coverage, would limit Citizens’ exposure. It would also subject consumers to unlimited rate increases and put them outside the safety net fund that pays claims when an insurer fails.

There is no data on how many condo complexes statewide currently have more than 25 percent short-term rentals, defined by Citizens as units that are rented for less than one month.

“Other places have more hotels and motels, but for us it’s a lot of condos, so it’s a huge concern,” said Virginia Haley, president of the Sarasota Convention and Visitors Bureau. “This has the potential of hitting a region like Sarasota especially hard.”

Olson and other condo owners have begun a letter-writing campaign to push state lawmakers to reverse the Feb. 23 decision by Citizens’ board of directors to implement the change.

But all the momentum at the state level favors shrinking Citizens.

Lawmakers considered a variety of bills in the 60-day legislative session ending March 9 that were designed to downsize Citizens and its twin sister, the Florida Hurricane Catastrophe Fund. None of the legislation passed, but Scott has pressed Citizens’ board to do everything it can administratively to shrink the company.

Citizens board member John Rollins said he sympathizes with condo owners and tourism promoters but added, “My concern is mainly that we don’t have unlimited values on the beach in very vulnerable places insured by Citizens.”

“Economic development is also being constrained by the threat of catastrophically large assessments after a hurricane,” Rollins said.

Scott and many state lawmakers argue that Florida’s economy would benefit from a more robust private insurance market, which they say is inhibited by Citizens’ lower rates.

But others note that private companies have pocketed huge sums in recent years while rates continue to skyrocket. Consumer groups point to questionable financial practices in the private insurance industry — including excessive administrative payments to related companies and spiking reinsurance costs — that have kept rates high and made it difficult for private operators to compete with Citizens.

The full impact of Citizens’ new condo policy will not be known for months. Company officials plan to submit their proposal to the state Office of Insurance Regulation for approval within the next two weeks. It could take the agency 45 days to review the plan, which is likely to be approved.

Citizens will begin sending insurance agents the new rules sometime this summer. After that, agents will meet with condo associations to discuss their options in more detail.

It is unclear how many associations will seek to limit short-term rentals.

Many complexes are so rental-heavy it is unlikely a majority of owners will want to change the rules. Instead, owners will take the insurance hit and pass the cost on to customers, a potential price increase that also worries tourism promoters.

“You could see tourism grind to a halt if rates increase to the point where it’s not affordable,” said Kevin Cooper, executive director of the Siesta Key Chamber of Commerce.

Even if a majority of owners want to restrict rentals, condo associations could have a hard time changing their rules without infringing on the legal rights of those who rent, said Walt Hammerling, whose Argus Property Management company has 250 condo clients from Englewood to Bradenton Beach.

“I’m not an attorney but my hunch is this can only apply to the new owners coming in and they would have to grandfather in the people already renting,” Hammerling said while noting that some people may voluntarily stop renting if the insurance hit is significant enough.

For Cooper, the trend is in the wrong direction.

“Weekly rentals are so pivotal, you hate to see anything pull it back,” Cooper said. “We should be expanding, not contracting.”