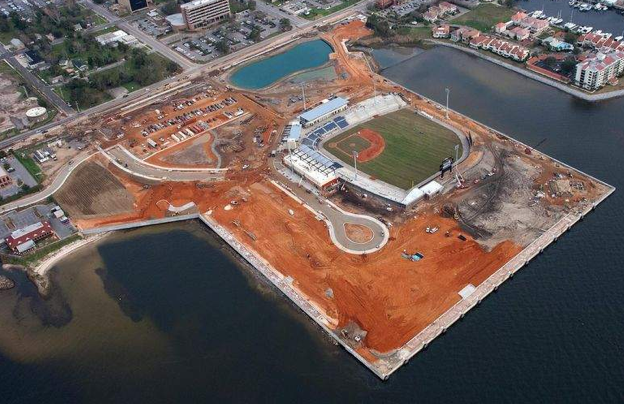 Up and down the Northwest Florida and Alabama coast, new facilities and attractions are beginning to take shape that will enhance the experience for visitors to the area for years to come. Facilities such as a refurbished amphitheater at Aaron Bessant Park in Panama City Beach, the Community Maritime Park in Pensacola, and the new site of the Alabama Gulf Coast Zoo and a neighboring water park in Gulf Shores are either completed, close to completion or in the planning stages.

The amphitheater, which will feature a new larger 60-ft.-by-40-ft. stage and can accommodate up to 10,000 patrons, will be a versatile facility according to Panama City Beach Convention and Visitor’s Bureau CEO Dan Rowe. However, Rowe said immediate plans are to put the facility to use as part of a sustainable concert series each year.

The larger stage means the facility can be used for full concerts, and Rowe cited two new concert festivals held this year as evidence that music can help expand the visitor season. “We held a country music festival earlier this year that featured performers Jason Aldean and Miranda Lambert,” Rowe said. “We had more than 13,000 people for the Aldean concert and more than 7,000 for the Lambert concert.” Rowe said a Christian music festival was also held and drew large crowds as well. (84)

Rowe said the amphitheater will give PCB something extra to attract visitors. “Even if people don’t attend a concert, it greatly enhances the visibility of a destination,” he said. The facility is set to reopen in 2012.(37)

Visit Pensacola Communications Director Laura Lee said the city’s new AA baseball team is set to take the field in 2012 at a state-of-the-art facility overlooking Pensacola Bay (pictured above). The Pensacola Blue Wahoos, the AA affiliate of the Cincinnati Reds will play their home games in the new Vince J. Whibbs, Sr. Community Maritime Park in the downtown area. The team, formerly the Carolina Mudcats, is scheduled to play their first game April 5.

The $52 million facility is a public/private project, and, according to its website, includes not only the ballpark, but also will offer “a unique, waterfront amphitheater, a multi-sports playing field and stadium hosting amateur and semi-professional teams, enchanting park settings with connecting promenades, and a protected marina with direct boating access to the Gulf of Mexico.” According to the site, future plans include restaurants and retail, unique residential units and office space, hotels, and the University of West Florida’s Maritime Museum, together with a museum celebrating the multi-cultural history of the area. (36)

According to Lee, the park is just one aspect of a revitalized downtown. “Especially along Palafox Place, we have new restaurants, art galleries, cafes, the Saenger Theater, and the former Masonic Lodge is now a venue for singer/songwriters,” she said. “We’ve always had the beaches, but with the revitalized downtown area, now you can spend a whole day just shopping and enjoying the other activities that area has to offer as well.” (72)

Lee said 2012 will also usher in the first class of the National Flight Academy. “Most people have heard of Space Camp for kids, and this will be much like that, except it will be about aircraft flight,” she said. “The camp is part of a $50 million facility complete with flight simulators donated by Boeing and Lockheed-Martin.” According to Lee, each camp session is five-days long, and Visit Pensacola’s plan is to entice the campers’ families to stay the entire week in Pensacola and rent a condo for the stay.

In Gulf Shores, plans have been announced to relocate the Alabama Gulf Coast Zoo to facilities that will ensure that the animals will never have to be evacuated for a hurricane again. The zoo made headlines in 2004 when the staff, in the face of Hurricane Ivan, had to evacuate almost 300 animals from its present facilities to a location just a mile north of the beach. According to the zoo’s board chairman, Steve Jones, it was the first time in history a zoo was evacuated in the face of a hurricane. Within a year of the first evacuation, staff members had to evacuate the animals from the facility twice more in 2005 in the face of hurricanes Dennis and Katrina. (54)

The evacuations and subsequent recovery spawned the Animal Planet television series “The Little Zoo that Could.” After watching the plight of the animals on television, a local businessman and his daughter offered the zoo foundation 25 acres several miles north of the current facility to build a new zoo designed to withstand hurricanes.  (53)

According to Jones, veteran theme park designer Dennis Thomas has produced blueprints for the zoo and not only will it be hurricane-proof, it will be the first zoo in the world to have as close to a zero-carbon footprint as is possible through cutting edge technology. Jones said the zoo will have the moniker of the Amazing Green Zoo.

“This groundbreaking new animal park will generate its own power using several renewable technologies including wind, solar and geothermal. It will even use animal waste, affectionately known as Zoo Poo, to generate power from algae,” Director of Development David Hall said. “All these cutting edge technologies mean the zoo will never pay a power bill to the electric company. The zoo will also grow its own food, supply its own water, run its own sewage plant and use or re-use recyclables. This zoo will be its own self-contained, living, breathing ecosystem.”

Hall has optimistically predicted the new zoo will open in 2012, but it depends on funding. “More than $1 million in ground preparation has already been accomplished, and the evacuation building has been completed, and we find ourselves at a precipice,” Jones said. “The next hurdle will be funding to ‘go vertical.’”

Investors are being sought to send the construction to the next level according to Jones, and he is also optimistic that construction will begin in earnest within a few months. (82)

Businessman Clyde Weir, who along with his daughter Andrea donated the land for the new zoo, has announced he will construct a new indoor year-round water park featuring saltwater attractions. Zoo designer Thomas has also been retained to design the water park and will be a partial owner. (18)

According to Jones, Weir has agreed to begin building the park once construction begins on the new zoo with the hope that both facilities will open almost simultaneously.

According to PCB’s Rowe, it is refreshing to see new construction beginning to take shape along the coast. It’s been a long time coming back,” he said. “The economic tough times are in our rear-view mirror and we’re looking forward to a bright future for visitors to our area.”