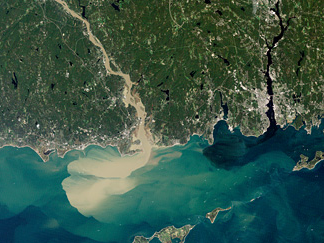 Senate leaders are being pressured to pass a flood insurance bill before the program expires at the start of hurricane season — and before a stormy election campaign takes the political center stage.

A diverse group of environmentalists, libertarians and insurers joined Sens. Jon Tester (D-Mont.) and David Vitter (R-La.) yesterday to showcase the five-year flood bill as a rare bipartisan compromise that can help both the economy and the environment. The National Flood Insurance Program will expire on May 31 without an extension.

“We know what needs to be done, and we know how to do it,” Tester said yesterday. “There’s no reason for a lot of brinksmanship … on this bill, and there’s especially no reason for it when you have an issue of this kind with such broad bipartisan support.”

Vermont’s farmland heads south. On Sept. 2, a week after Hurricane Irene pumped 6 to 8 inches of rain into many parts of New England, a NASA satellite saw the Connecticut River spilling this plume of sediment into Long Island Sound. Photo courtesy of NASA.

The measure answers some concerns of climate change advocates by raising premiums for new flood insurance customers and hiking annual increases on existing nonresidential homes and businesses by 15 percent. It also requires people living behind levees and dams to buy coverage for the first time, if their mortgage is federally regulated.

And the bill creates a natural catastrophe commission to study how the United States can reduce its risk from disasters like flooding and hurricanes at a time when new research warns that climate change could increase damage from ocean storm surges in the future.

“Unfortunately, flooding is becoming more frequent and more severe,” Bob Irvin, president of American Rivers, said in support of the bill. “People need reliable information about where floods are likely to occur in order to protect themselves and their property from flood damage.”

The price hikes in the bill are seen as a message to developers and homeowners who have flocked to high-risk coastlines, often at the expense of wetlands that can absorb and reduce flooding damage of seashore storms. Higher insurance prices, advocates say, can discourage such development.

“The way [the existing law] is written today creates incentives for the development of floodplains and coastal areas,” said Larry Schweiger, president of the National Wildlife Federation. “That has not only led to more people living in harm’s way but it often results in the destruction of wetland and riparian habitats. Today there are more than 6 million buildings in the mapped 100-year floodplains.”

Building along coastlines when sea levels are rising and hurricanes may be getting stronger is seen by some as a reverse adaptation to climate change. A study released by the Massachusetts Institute of Technology yesterday punctuates those concerns. It found that sea surges near New York City could be higher and more frequent by the end of the century.

Areas that now have a 1 percent annual chance of being flooded by bulging ocean water, which is pushed toward the shoreline by hurricanes, could face floods every three to 20 years, according to MIT researchers Nin Ling, Kerry Emanuel and others.

The computer models don’t all agree. Some say the radius of a storm’s strongest winds could decrease as a hurricane intensifies, potentially limiting the surge. But the paper notes that a reduction in the range of maximum wind might be “offset and even reversed” by a bigger and more bruising storm.

“In such a case, climate change will probably increase storm intensity and size simultaneously, resulting in a significant intensification of storm surges,” write the researchers.

The Federal Emergency Management Agency is currently studying the effects of warming temperatures on flood insurance. Preliminary findings indicate that climate change and all of its orbiting phenomena — such as sea level rise, strengthening hurricanes and heavier downpours — could increase the size of the nation’s floodplains 45 percent over the next 80 years.

Highest-risk policies to double in price

Congress has not addressed those issues, but supporters of the flood bill point to new steps that could begin the adaptation process.

The Senate bill, which offers smaller premium increases than the 20 percent annual hikes in the House version passed last July, would begin a phased process to reverse the program’s suppressed rates. Eventually, that could help the program collect surpluses to be applied as aid during unanticipated disasters, or to buy private reinsurance to pay claims resulting from a mega-catastrophe. The bill promotes both of those steps.

For much of its existence, the flood program has relied on outdated maps showing the boundaries of floodplains with a 1 percent annual chance of hosting high water. Homes in those areas are required to buy flood insurance. FEMA has been modernizing those maps, which sometimes show a larger floodplain — and more homes within it.

The Senate bill continues that mapping process. It also allows homeowners who have entered the newly mapped floodplain to phase into the insurance program over four years. They will pay 40 percent of the cost in the first year, followed by annual price increases of 20 percent.

It also targets policies attached to homes that are most vulnerable to flooding — whose owners also pay some of the lowest premiums. These floodplain homes were built before the first flood maps were finished in 1975 and were grandfathered in at reduced rates. They account for about 20 percent of the program’s 5.6 million policies and pay roughly 40 percent of the true cost of insuring them.

The bill, if passed, would begin the end of that era. Businesses, second homes and some repetitively flooded structures in that category face annual rate increases of 25 percent until the premiums paid match the risk the insurance must cover.

The Congressional Budget Office estimates that 440,000 subsidized policies costing an average $1,174 a year would be affected. The cost of flood insurance for those people would more than double.

It’s unclear if Senate Majority Leader Harry Reid (D-Nev.) will find time to reauthorize the program, which expired at different periods in 2010 for a total of 53 days. But Tester and Vitter say that if the bill comes to the floor, it will attract the 60 votes needed for passage.