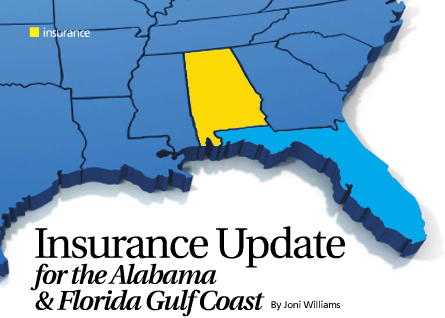 They may be only a state line apart, but when it comes to property insurance, Florida and Alabama are worlds away. While rates have stabilized recently for their Northern neighbors, policy holders in the Sunshine State are facing lofty increases as the state’s largest insurer, Citizens Property Insurance Corp., aims to downsize its presence.

However, both states, along with the rest of the nation, are potentially facing significant increases in flood insurance premiums for non-primary homes and commercial properties, the result of a Federal act aimed at recouping a multi-billion dollar deficit incurred by the National Flood Insurance Program.

In Alabama, due to the lack of named storms in recent years, the number of new policies written through Baldwin and Mobile Counties’ insurer of last resort, the Alabama Insurance Underwriting Association (AIUA)—better known simply as the “Beach Pool” or “Wind Pool”— declined in 2013, according to the Insurance Information Institute (III), after steadily increasing in years prior to 2012. At the same time, the AIUA was providing coverage to some 27,000 policies as of March 2013—2,300 more than the previous year.

Area agents said this stabilization can be attributed to the return of private insurance companies, who left what was once a storm-riddled coast in the mid-decade of the new millennium but are now, once again, writing policies here.

Perhaps even more encouraging, Alabama agents seemed to agree that premiums for commercial property insurance policies, such as those that typically cover condo developments, have been on a steady path and, barring any unforeseen major weather incidents or natural disasters, are forecast to remain stable going forth.

“For the last couple of years, the rates have been steady,” confirmed Bruce White, an agent at Arthur J. Gallagher & Co. “If anything, there have been some slight decreases.”

Describing the market in a “hold pattern” Lee Garrison of Wells Fargo went on to say via email that “rates are, generally, holding flat to potentially (decreasing by) five percent for non-northeast CAT driven property.” CAT is an agent-friendly term to refer to catastrophic-prone properties. He then cautiously added, “We expect…to see reductions going into the fourth quarter, assuming there is no major loss event between now and then.”

And the news gets even better. At least one agent said the rates insurance companies pay for reinsurance—the insurance for insurance companies, so to speak, designed to mitigate their risk– are also declining due to improving market conditions such as a recent uptick in competition.

“As those reductions trickle down into the direct market… we expect to see CAT property rates face downward pressure as we wind down 2013,” said Wiley “Wil” Cooper, AmWins vice-president.

But while condo owners and associations along coastal Alabama may be able to look forward to steady– or even declining– property insurance rates, the outlook for Florida isn’t so upbeat.

It’s no secret that for some time Florida’s Gov. Rick Scott along with other state politicians have been aiming to break up its state-run insurer, Citizens Property Insurance Corp. Originally conceived as the insurer of last resort, Citizens has evolved into the state’s largest provider of property insurance, covering some 1.3 million policy holders, according to the III, with a cash reserve reportedly nearing $6.2 billion.

In June, Citizens’ board approved rate increases widely reported in the media as averaging seven percent. A closer look, however, reveals that commercial lines accounts for condos would actually jump as high as 11.5 percent.  Agent Cindy Gilmore of Gilmore Insurance in the Florida panhandle said primary homes will see the least of the increases, but “condo associations, that’s a different story. That’s going to be expensive.”

Private insurance companies may not provide a safe haven from higher rates, either, Gilmore said, because they’re allowed to charge up to 20 percent more per rate year. “The (State) insurance department has to approve it, but most of them are taking their 20 percent,” she said of the companies in Florida that are expected to raise rates.

Still, more and more policy holders may find it increasingly difficult to obtain coverage through Citizens, as the insurer is not only moving to increase its rates, but will ensure policies are shopped around to private companies before issuing coverage.

And the insurance giant is taking this process into its own hands, literally, as tightened criteria dictates Citizens shop or “market” prospective policies to other companies via exchanges. According to the III, “policyholders would be required to select an offer if the premium was within 15 percent of the price charged by Citizens.”

“You’re not supposed to be using Citizens unless there’s nowhere else to go,” explained Gilmore, who went on to say that until the preliminary marketing of policies to other companies is completed, Citizens can’t bind coverage.

Although the move is designed to ensure coverage with private companies is not financially feasible before committing to new policies or renewals, Gilmore anticipates the requirement will cause unforeseen delays. “The marketing part is supposed to take 48 hours, but I think it will take longer,” she said, pointing out what could prove to be a snafu for time-sensitive transactions such as real estate closings.

Still, even with Florida’s property insurance in turmoil, insurance and real estate pros say the changes pale in comparison to those taking place in the National Flood Insurance Program. And because the program is federal, it will also affect policies in Alabama, along with the rest of the U.S.

“There’s not one bit of difference for (Alabama and Florida),” said Bruce White of Arthur J. Gallagher & Co. “The National Flood Insurance Program is written with the same guidelines for every state in the country.”

And the program is experiencing some far-reaching changes since the passage of the Biggerts-Water Flood Insurance Reform Act of 2012, which aims to do away with subsidies and raise rates on policies for non-primary homes in order for the program, which wound up in the red by billions of dollars after Hurricane Katrina, can become actuarially sound.

“Flood insurance is a hot topic right now,” said Gilmore. And no wonder. Although owners of primary residences are being given a break on spiraling rates on primary residences, second and vacation homeowners have seen some hefty increases on renewal premiums.

Added to this, many coastal properties in certain types of designated flood zones are not eligible for the National Flood Insurance Program, and must seek out policies through private companies, which is typically more expensive.

Other properties that qualify as “repetitive loss” structures are also paying dearly. “I have some townhomes that got renewal notices for $21,000 for flood insurance,” Gilmore said, quoting a yearly rate.

Longtime Florida Realtor Annemarie Kronfuss said it’s not uncommon for owners to be unaware of the changes until they get a renewal notice. And the increase, she said, can be downright shocking.

She then wondered aloud about the long-range outcome of these kinds of increases, along with other market factors such as the uptick in lending rates. “Higher interest rates and higher insurance rates mean rent will have to be increased,” she said. “And I wonder how that will affect tourism.”

However, agents concede the National Flood Insurance Program, which ran up a hefty multi-billion dollar deficit after a string of named storms, was in dire straits and needed a way to become solvent. According to the U.S. Government Accountability Office (GAO), as of April 2010 the program owed the U.S. treasury $18.8 billion.

“Biggerts-Water is designed to make flood insurance more actuarially fair,” White said, discussing the 25 percent per year rate increases for investment properties stipulated by the Biggert-Waters Act. “Many people who own properties used as secondary or vacation homes will face substantial rate increases.”

Additionally, because elevation maps are being redrawn, owners of low-lying properties deemed at higher risk could face increases as high as 20 percent, whereas the cap previously was 10 percent.

Word of the various changes and just how significant the increases can be has been slow to get out to the general public, say insurance and real estate insiders. “I’m amazed at how many property owners and Realtors don’t know about this and won’t, until they get a (policy) renewal,” said Kronfuss.

She is also concerned the higher rates will affect the coastal real estate market, which recently experienced a healthy boom. “You are probably going to see more people selling,” she said of investors holding repetitive loss or other high-risk properties who will not be able to absorb a sudden, extreme increase in flood insurance premiums.

Kronfuss said the higher rates might also scare off potential buyers. “One of the first things you do when buying a property is check insurance rates.”

Because the changes dictated by the Biggert-Waters Act are most significant for commercial property policy holders, White advised that affected policy holders who wish to express their opinion take action by contacting their U.S. senator or congressman.