Holiday Lights and Decorations… What’s An HOA To Do? 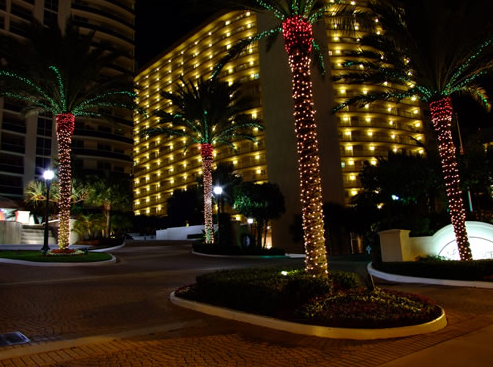 You can put reasonable restrictions on your owners’ holiday displays. But that can cause resentment among some owners. Here we discuss whether and how HOAs have broached the Christmas display issue by imposing rules and regulations. We also discuss what an HOA should do when owners go overboard, creating what some consider a nuisance in the neighborhood, with extreme lighting, noise, and traffic.

What’s the big deal with holiday displays? In today’s culture where opinions are strong and often divided, what can possibly go wrong?

“I’ll go back to the beer can wreath issue we had 24 years ago today,” reminiscesElizabeth White, a shareholder and head of the community associations practice at the law firm of LeClairRyan in Williamsburg, Va. “I know the date because it coincided with the birth of my first child, who turned 24 today. Owners had put up a really, really gaudy and humungous beer-can wreath on their door, and their neighbors were upset. Then CNN caught wind of the story that had run on the local news network. The topic got a lot of traction and bad publicity. But in the scheme of things, it wasn’t that bad of a display except for the beer cans. It was one of those close calls under the association’s covenants and rules, which I think included restrictions on decorations that didn’t fit the colonial Williamsburg look of the community.”

It’s not just Christmas displays that can create division. “Interestingly enough, I met with a condo association yesterday that banned all forms of holiday displays,” saysDuane McPherson, the Carrollton, Texas–based division president at RealManage, an association management firm that oversees properties in Arizona, California, Colorado, Florida, Louisiana, Nevada, and Texas. “They told me that a few years ago, they had an issue with some owners’ Halloween decorations. Some felt the display was good, and others felt it was objectionable and over the top. Rather than try to determine what’s appropriate, they just did away with displays altogether. There was no backlash because the rule was voted on by the owners.”

Afraid To Be A Grinch?

But there’s a risk in being the board that says, “Bah, humbug!” “There are a lot of boards afraid to deal with this issue because of the political correctness aspect involved,” says McPherson. “In many cases, I think they should do something. But they need to get buy-in from owners and make sure restrictions reflect the majority’s opinion. If I were a board member, I’d rather make certain the community is for those kinds of decisions than trying to make the decisions as a board and having more backlash than necessary.”

What types of restrictions are reasonable and typically won’t produce too much backlash? Here are suggestions:

1. Restrictions that actually address the issues you’re facing. “Think about your real concern,” advises White. “Is yours a really dense community? What’s the real likelihood of a problem? Do your covenants allow restrictions? And how much leeway do you really have? I’d hate to have to go into court to defend an unreasonable holiday restriction.”

2. Restrictions that apply to all owners fairly. “It all really starts with the covenants and what you’re able to restrict,” says White. “There’s also that Fair Housing Act overlay that I’m overly sensitive to. You have the secular holiday displays, like a Santa. But then there are things like manger scenes, which cross over into the religious. We always want to make sure we’re as content neutral as possible when implementing restrictions so we’re not regulating just the manger scenes. You don’t want to treat, say, a Christian holiday different from a Jewish holiday. You’re really not dealing with a constitutional right. But you do have freedom of speech issues, and you want to tread carefully in that area.”

3. Restrictions that provide owners with solid guidance. “Many of my associations allow owners to put up holiday decorations,” says David W. Kaman, a Columbus–based partner at Kaman & Cusimano LLC, which represents associations throughout Ohio. “But they impose two restrictions. Number one, they restrict the dates so it’s limited to 30 days before and after the holiday. One of the greatest newsletter blurbs I ever saw said, ‘Please take down your Christmas decorations. You don’t want to scare the Easter bunny!’ That hit home the fact that some people will put out extensive decorations and never take them down. This restriction resolves that.

“The second thing they restrict is placing items in the common elements,” adds Kaman. “Here I’m specifically talking about condos prohibiting or restricting the big blowup displays, like the snow globes with Santa inside. I’ve seen a lot of associations restrict inflatable displays, but really the rule is that any and all displays are prohibited in the common elements.”

4. Restrictions that protect other owners from light, noise, or traffic burdens.“Accepted holiday lighting is a big issue,” says White. “If you’re dealing with a multi-family building where all the owners are on the same power grid, the spectacle-kinds of displays where owners literally have thousands of lights can truly create a lighting issue.”

It’s hard to predict what regulations are necessary to prevent the over-the-top displays some owners revel in arranging. But you can certainly react when a problem arises. “In many cases, the association doesn’t control what happens on the roads,” says McPherson. “On that issue, you’d have to complain to the local entity that enforces regulations on the roads. But I have seen one or two cases where an association had to send a letter to an owner saying a display was too much or the traffic that’s been created was a nuisance and asking the owner to reduce the size of the display.”

Was there backlash or a claim of Scroogishness? Not a bit, says McPherson.