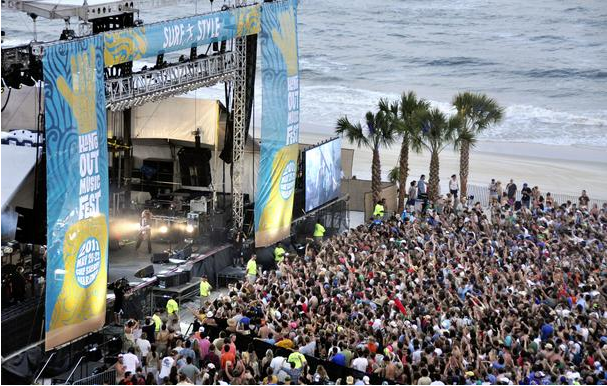 The Hangout Music Fest takes place May 18-20 on the beach next to the Gulf of Mexico in Gulf Shores, Alabama. Headliners this year are Dave Matthews Band, Jack White and The Red Hot Chili Peppers.

Two weeks after going on sale in early February, general admission tickets to the 2012 Hangout Music Fest in Gulf Shores, Ala., sold out. This three-day music festival on the beach, founded in 2010, got off to a rough start. The Deepwater Horizon oil spill was making its way to the Gulf Coast and tourists were wary of heading to the shore.  The headlining act The Flaming Lips had to cancel due to a band member’s illness and storms caused organizers to offer free admission on the last day of the event.

In 2011, things went much better with a bill that included legendary artists like Paul Simon, good weather and a triple-sized paying crowd.

The Hangout has gone from a shaky upstart to a nationally renowned music festival. Headliners for 2012 are Dave Matthews Band, Jack White and The Red Hot Chili Peppers. Organizers capped general admission ticket sales this year and expanded the footprint of the festival grounds, to keep the event manageable and enjoyable. “Another year that we can bring 35,000 music and fun-loving people to our beautiful beach is a great thing,” says festival founder Shaul Zislin. “

Zislin is the owner of the beachfront bar, restaurant and entertainment complex that gives the festival its name. The festival takes place on the wide beach area in front of the easygoing, open-air establishment, a legendary haunt along the Alabama coast. The symbol of both the restaurant and the festival is the shaka, a traditional Hawaiian hand gesture that means “hang loose.” If you’ve seen those commercials touting tourism’s rebound along the Gulf Coast since the 2010 oil spill, that’s Zislin in the Gulf Shores segment, flashing the shaka sign in front of his restaurant.

For those who didn’t get a ticket to this year’s festival, a limited number of pricier VIP passes — with perks such as separate entrances and special viewing areas — and lodging packages that include passes, are still available. For those with a ticket in hand, the Gulf Shores/Orange Beach area has plenty to offer besides music. If the crowds get to be too much and you need some down time alone with nature, head to the 7,000-acre Bon Secour National Wildlife Refuge or take a hike on the extensive backcountry trails of Gulf State Park. Go kayaking in the scenic tidal creeks and marshes or take a dolphin watching eco cruise on the bay. The Alabama Gulf Coast Zoo, located a couple of miles from the festival grounds, is a don’t-miss attraction for animal lovers, known as “the little zoo that could” from its feature series on Animal Planet.

The Hangout Music Fest has travel packages that include lodging at local resorts. One of the more luxurious properties in the area offering a festival travel package is Turquoise Place in Orange Beach. The package includes transportation to and from the festival. More info on this and other packages can be found at the festival’s website. For a handy guide on vacancies during the weekend of Hangout check out the Gulf Shores and Orange Beach tourism bureau’s webpage www.gulfshores.com/lodging/vacancies.aspx for the latest updates. The festival also offers a shuttle service convenient to area accommodations along the beach road and Ala. 59, the main highway heading into town.

The Pink Pony Pub, a Gulf Shores landmark, is located next to the festival grounds and impossible to miss with its bright veneer of pink paint. Tiny and unassuming King Neptune’s is one of the best seafood joints in the area, located on Ala. 59 across from the Alabama Gulf Coast Zoo. For good seafood with a scenic view of Big Lagoon, check out the Original Oyster House, also on Ala. 59, near where the highway dead ends into the Hangout.