4 Rehabilitated Sea Turtles Released Back Into Gulf Of Mexico 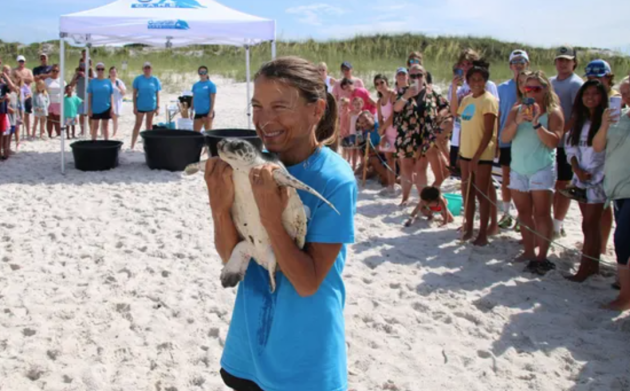 It was a beautiful morning as the Gulfarium C.A.R.E. Center released some of its recent patients.

“It is always so rewarding when we release sea turtles back into the Gulf,” said Patrick Berry, director of the Gulfarium C.A.R.E. Center. “All species of sea turtle are endangered so we are passionate about doing everything we can to help these animals. I am proud of our team and their commitment to give sea turtles second chances.”

All of the rehabilitated sea turtles arrived at the center after being accidentally hooked by fishermen at local fishing piers.

Silvia, a juvenile Kemp’s ridley sea turtle weighing just 7 pounds, was foul hooked in the right front flipper by a circle hook at Navarre Beach Fishing Pier on April 5, 2022. Intake radiographs revealed no internal hooks but her stay at the C.A.R.E. Center was lengthened by an increased white blood cell count, indicating an infection. After a round of antibiotics, Silvia was cleared for release.

Next to head into the Gulf of Mexico was Bjorndal, a sub-adult loggerhead weighing 112 pounds who was foul-hooked with a J-hook in the left front flipper on June 22. Clear radiographs and bloodwork meant that it was a short stay at the center for this turtle.

Even though Foster has a large “L” shaped carapace wound, it was completely healed prior to arrival at the center and did not require any medical treatment.

The final turtle to head down the beach back into the Gulf of Mexico was sub-adult loggerhead Brinkley. Brinkley was hooked in the mouth with two treble hooks. Upon arrival to the center on June 22, both hooks were successfully removed with mild sedation. Following a quick healing period, this loggerhead was cleared for release.

If you accidentally hook a sea turtle while you are fishing, please do not cut the line. Report it to Florida Fish and Wildlife Conservation Commission immediately at 1-888-404-FWCC (1-888-404-3922) to receive direction on what to do.

Follow the C.A.R.E. Center on Facebook to learn more about sea turtles and the center’s rehabilitation efforts.  The C.A.R.E. Center and its patients can be visited as part of a general admission ticket to Gulfarium Marine Adventure Park.