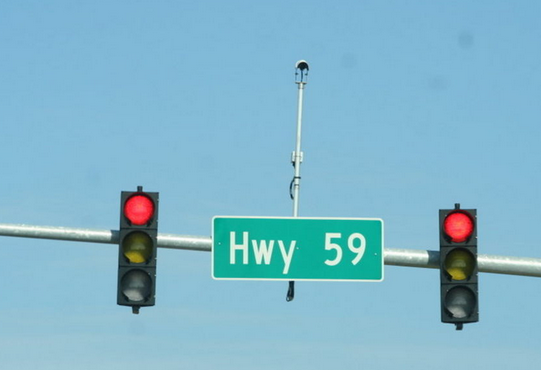 Beach traffic! Alabama’s coastal residents are well acquainted with it and tourists heading south on highway 59 probably have bumper-to-bumper days etched into their minds.

Baldwin County’s beach cities and the state are well aware of the grief and have beenworking toward improvements through an adaptive, or “smart,” traffic signalization system.

Gulf Shores is well ahead of the pack and Foley officials are trying not to be too far behind. By Memorial Day weekend, Gulf Shores expects to have all of the traffic lights on highway 59 — covering more than 5 miles — equipped with new car-detecting radar cameras and hardware to allow communication between each signal.

Once the system is fully operational the signals will respond to traffic flow, measuring speed and the distance between vehicles to determine how much “green time” is needed at each intersection, according to Public Works Director Mark Acreman.

“So the signals respond to the actual traffic at any given time at every intersection that we have along highway 59,” Acreman explained, “and then all of those intersection communicate with each other so that they’re timing plans are synchronized within each other.”

Acreman said the city began taking steps to improve traffic flow about a decade ago by synchronizing signals for the first time.

“That was a big step forward for us and we’re still using a major component of that,” Acreman said. “We interconnected all of our traffic signals to a fiber optic backbone, so all of our signals can communicate with each other and can be controlled from a central location.”

In January 2014, the city took steps toward having fully adaptive lights by approving a $290,000 contract with Theodore-based Bagby & Russell Electric Company Inc. to install responsive traffic controls at four intersections along the state highway — Beach Boulevard/Ala. 182, Fort Morgan Road/Ala. 180, 20th Avenue and north of the Intracoastal Waterway on Baldwin County 4.

“Last year, we did an intermittent upgrade, called responsive traffic control,” Acreman said, “using a few key intersections to control all timing plans for all the signals. So what we’ve done now is expand that to all the intersections.”

On Monday, the Gulf Shores City Council approved a $700,000 contract with Bagby & Russell to complete the upgrades. As with the previous contract, the Alabama Department of Transportation agreed to cover 50 percent of the cost. Work is scheduled to be completed before the end of May.

“This is a partnership with ALDOT and it has been extremely successful,” Acreman said. “We’re very excited about this new system and expect it to have substantial improvement to our traffic flow in the summertime.”

ALDOT traffic engineer Daniel Driskell said Gulf Shores’ signalization system improved upon pilot projects in Birmingham, Montgomery and Huntsville. One key change will be the use of radar cameras instead of video, because of its efficiency. The effectiveness of video cameras is limited by fog, sun glare and heavy rainfall.

“Radar was the most robust system that could do everything that we needed,” Driskell said. “It’s what we call detection; when it detects it sends a signal to the cabinet to tell our system what to do. It’s all automated, so it will be constantly gathering data and calculating and recalculating to optimize that system.”

Acreman said the radar will be used strictly for traffic-flow purposes.

“Before people start freaking out … it has nothing to do with automatic ticketing or anything like that,” he said.

While the ultimate goal of the system is to link up Foley’s 17 traffic signals with Gulf Shores’ baker’s dozen, efforts by elected officials in the Forward City have fallen short so far.

In May, the Foley City Council approved a funding plan that City Administrator Mike Thompson submitted to ALDOT. The proposal, however, was turned down.

Under Foley’s plan, the city would’ve funded about $651,000 of the estimated $1.89 million project, or 34 percent. Thompson said a sticking point for the city has been the fact that when ALDOT built the systems in Birmingham, Montgomery and Huntsville, the municipalities only had to cover anywhere from 7 to 20 percent of the costs.

“They know we want to partner with them but we’re not willing to fund repairs on a state highway all on our own shoulders,” Thompson said. “We want to partner and we will but it has to be a reasonable amount.”

Kathryn Hamlett, spokeswoman with ALDOT’s Southwest Region, said all potential projects in Baldwin County are currently being reviewed by an engineer out of ALDOT’s central office in Montgomery.

Hamlett said the engineer has been meeting with municipalities and the Eastern Shore Metropolitan Planning Organization, which is spearheading its own adaptive signalization plan, to come up with a complete list of road projects.

The review is expected to lead to a project priority list that will be submitted ALDOT Director John Cooper.

“The director wants to see that before he makes further funding decisions for Baldwin County,” Hamlett said. “It not going to be anything that is released and it doesn’t mean that the director is going to follow all the recommendations. But we just have so many projects that Baldwin County has requested right now (that) they had to find a way to prioritize them.”

Based on recent discussions with ALDOT officials, Thompson said the highway department is also looking at improving access management along highway 59 and possibly a third southbound lane.

In Orange Beach, officials have expressed interest in adding adaptive technology, linking to Gulf Shores and Foley, but have not dedicated any funding to it.

City Administrator Ken Grimes said once lane improvements are finished on Canal Road “it will help set up the next step at key intersections with adaptive technology in the near future.”