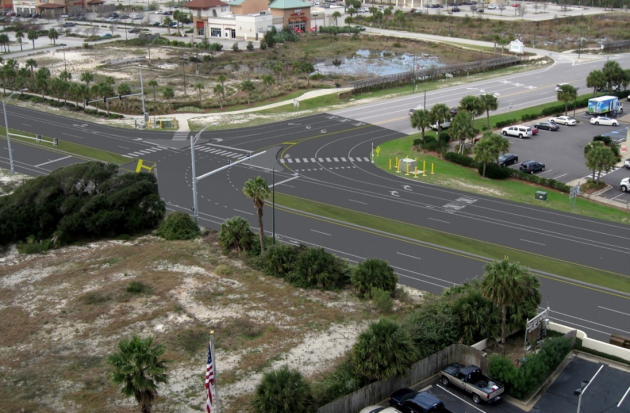 GULF SHORES – Boy, have we got a deal for you!

Gulf Shores city officials are excited about an Alabama Department of Transportation plan for improvements of beach road from Gulf State Park to West Lagoon Avenue.

“We have been working on the Gulf Place improvement project,” Public Works Director Mark Acreman said. “And as part of that project we have approximately $3.6 million budgeted to perform improvements to the Beach Boulevard in front of the Gulf Place from West Third Street to East Second Street.”

Then came a game changer. Talking with various officials from the Alabama Department of Transportation, Acreman learned that ALDOT wanted to resurface Beach Boulevard which included many of the improvements that were budgeted in the City’s Gulf Place project.

“Recent meetings with ALDOT have given us an opportunity to re-appropriate already budgeted monies and expand the Beach Boulevard improvements to the Gulf State Park and to West Lagoon Avenue,” Acreman said. “The way we would fund this additional work is to use the savings from ALDOT performing the resurfacing work and apply them to the Beach Boulevard Improvement project. In addition, we are also utilizing savings from a recent signal upgrades to fund signal work that is necessary for Gulf Place Improvement project.”

Acreman said the City wants to expand the planned improvements from West Third Street to East Second Street to a total length of two miles.

That includes expansive work on both sides of Beach Boulevardto include 8-foot sidewalks and 5-foot bike lanes separated by a landscaped median. Roadway medians will take the place of center turn lanes and offer a refuge for pedestrians crossing the road.

Special left-turn lanes will be placed at intervals along the roadway to make it safer for both drivers and pedestrians.

“We would have a vegetated buffer to separate bikers from what would be an 8-foot pedestrian pathway on each side of the beach highway,” Acreman said. “If we continue in this scope it will allow us to build two miles of the beach highway in this configuration. It would start as you enter the city from the east and go all the way to West Lagoon Avenue where it constricts down to two lanes.”

“Those components were included in our original $3.6 million budget. We’ll save about $2.3 million of that budget that we can re-apply, re-appropriate to expand the scope of that project,” he said. “We estimate that expanded scope of the project is only going to cost $3.8 million do about $200,000 more than what our original budget was.”

The city’s first step to get this project rolling is to engage Volkert Engineering in a nearly $1 million contract to lay the groundwork for the project.

“This would be one turnkey project.”

Acreman said the state wants to begin work after the summer of 2017.

“That means we have to have our stuff designed and ready to go by the spring of next year,” he said. “In order for us to do that we have to pull those components of the original Gulf Place scope of work, the design elements, put them into its own package.

“We are wanting to pull the design portions of Gulf Place project and put them in a stand-alone project that would include surveying, design, permitting, construction inspection and program managing as well as landscaping design.”

Mayor Robert Craft and the council were favorable to the plan and the Volkert contract was approved in Monday’s council regular session.

“This will provide a much safer roadway because in areas designed in the median will grassy and a safe haven for pedestrians,” Craft said. “When they get to that middle they won’t be stuck in a lane that’s used more frequently.

“It will require a little more cooperation and understanding. You won’t be able to turn left anywhere you want to anymore. That’s created a lot of hazards and accidents. This makes it safer and creates some traffic calming.”