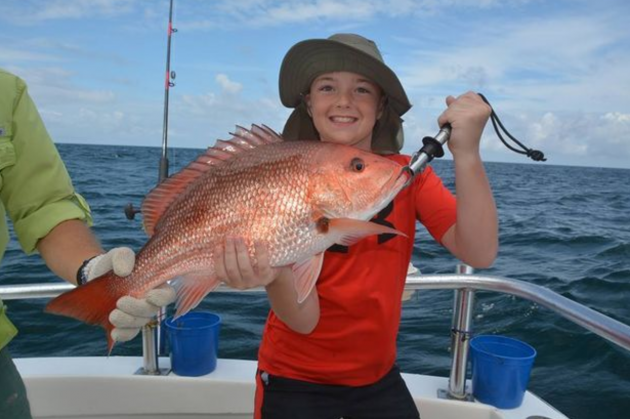 For the first time in a decade, federal authorities and the five Gulf states agreed on Wednesday to align their recreational red snapper seasons. The move allows for an extended season in the deep waters of the Gulf of Mexico.

The re-started federal season for anglers begins on Friday and will continue for 39 weekend days and holidays through Labor Day on Sept. 4. During this time, the season will be closed Monday through Thursday in both the state and federal waters with the exceptions of July 3 and 4, and Sept. 4.

The 2017 federal red snapper season for private recreational angles had been capped at an all-time low of three days, ending on June 4. The limited days prompted fierce criticism from federal, state and local government officials who have questioned methods used by scientists with the National Oceanic and Atmospheric Administration to estimate the health of red snapper populations.

The extend federal season, announced by the U.S. Department of Commerce – which oversees NOAA – was welcomed by Alabama officials where red snapper season in cities like Orange Beach, Gulf Shores and Dauphin Island provides an economic boost.

Chris Blankenship, the acting commissioner with the Department of Conservation and National Resources, called the federal-state agreement a “historic” accord.

“This is a huge victory for recreational fishermen and our Gulf coast communities,” said U.S. Rep. Bradley Byrne, R-Fairhope.

Added U.S. Sen. Richard Shelby, R-Tuscaloosa: “I am pleased the Department of Commerce is listening to states and local anglers to provide immediate relief to this problem. Adding 39 days to the recreational fishing season for red snapper is great news.”

Byrne and Shelby – along with others including Orange Beach Mayor Tony Kennon – said this year’s agreement offers only a short-term solution. They are advocating for a longer-term resolution that provides more control of the Gulf to the five states of Florida, Alabama, Mississippi, Texas and Louisiana.

Commerce Secretary Wilbur Ross, during an appearance before a Senate committee last week, said the agency is conducting an independent stock estimate of red snapper. He said the assessment is “on track” to be completed by next year.

Shelby has since pushed for a state-led pilot program for red snapper management, and has said he plans to push Ross’ administration on the issue.

Federal seasons for recreational anglers have tightened sharply over the years.

Strict harvest limits of four-fish per bag were put into place during the George W. Bush administration in 2006. By 2008, the season had dropped to around 60 days a year and anglers were limited to keeping two fish. The length of the federal season has been in a freefall ever since, culminating in this year’s three-day season.

Alabama Gov. Kay Ivey, meanwhile, praised Ross and President Donald Trump for extending the season. She said that she spoke to the president about the issue while visiting Washington, D.C., last week.

“The red snapper fishery provides a major impact to Alabama’s economy,” said Ivey in a news release. “Every day the federal season is open helps businesses in coastal Alabama.”

Grant Brown, a spokesman with the city of Gulf Shores, echoed Ivey’s comments.

“Many of our residents and guest enjoy red snapper fishing and the three-day season which had already expired is simply too short,” he said. “This is not only something that enhances our quality-of-life along coastal Alabama, but also stimulates our local economy.”

In Orange Beach last month, City Councilman Jeff Boyd said that Gulf Shores and Orange Beach attract a combined 6.2 million visitors each year. While a majority are enjoying family beach vacations, he said a hefty chunk come to fish in the Gulf.

“Today’s announcement will provide some much-needed relief to our fishermen and help benefit our economy in coastal Alabama,” said Byrne.

Ross, in the Commerce Department’s news release, recognized the efforts to extend the federal season by House Majority Whip Steve Scalise, a Republican from Louisiana.

Scalise was one of four people shot at a suburban Washington ball field on Wednesday morning by a lone gunman distraught over Republicans and Trump’s election.

Scalise, who was struck in the hip while standing on second base, has since undergone surgery at MedStar Washington Hospital Center and was in critical condition by mid-afternoon.

Scalise, who often vacations in coastal Alabama, joined Byrne for a red snapper fishing trip in 2014, to show how plentiful the popular gamefish are in the Gulf’s waters.

“Majority Whip Scalise and his staff have been incredibly helpful on this and a host of other issues, and I wish them and the other victims a speedy recovery,” said Ross.