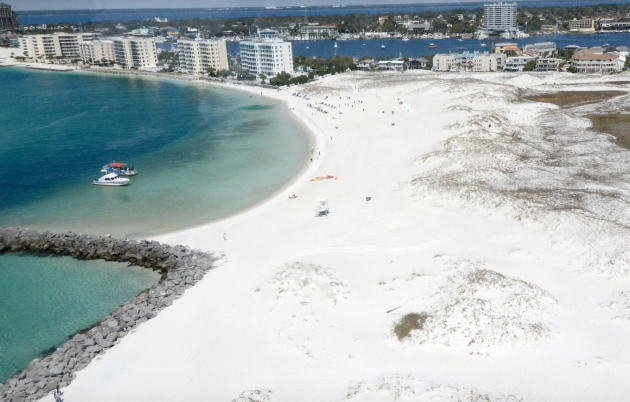 DESTIN — On May 15 the City Council discussed the possibility of the city buying the controversial Parcel B along East Pass and using the land for a public beach.

If purchased by the city, the parcel could become Destin’s second-largest city-owned beach property, after the soon-to-be stabilized Norriego Point.

The vacant 11.7-acre Parcel B, next to Destin Pointe on the west end of Holiday Isle, is owned by Peter Bos and associates. Bos is the president/CEO of Legendary LLC and the developer of the Emerald Grande resort.

The potential cost of Parcel B and possible ways to pay for it could be part of the May 15 discussion, Destin spokesman Doug Rainer said Wednesday. Also, the council might consider having city Land Use Attorney Kimberly Kopp enter discussions with Bos’ attorney, Dana Matthews, about the purchase.

Parcel B’s assessed value is $434,654, according to the Okaloosa County Property Appraiser’s Office. The property last changed hands in September 2012 when Aqua Development LLC purchased it from a bank for almost $4.2 million. As the 2012 transaction proved, any future sale price would be considerably higher than the assessed value.

The latest controversy about Parcel B centered on a portable toilet that Legendary had placed there last summer for visitors from the Emerald Grande. Bos has said that the toilet was set up after Destin Pointe residents complained that people were using the sand dunes as restrooms. Legendary had the toilet removed last fall at the end of the tourist season.

The resulting public outcry over the issue, however, led to proposed city rules on individual, standalone portable toilets. The council on Monday approved the first reading of an ordinance to limit such toilets to the sites of permitted construction projects and permitted special events.

Holiday Isle resident Marcie Bell complained to the council Monday that Legendary’s toilet had stood close to condominiums. And during the audience comment period near the end of the meeting, Bell said Legendary had been using the high density residential-zoned Parcel B for a commercial purpose.

Shortly after Bell’s latter comments, Councilwoman Prebble Ramswell brought up the possibility of the city buying the parcel

Ramswell said the idea first came to her after Matthews had said, perhaps in jest, at a past council meeting that the city could consider using eminent domain to take over Parcel B.

“One thing that we’re always seeking is additional beach access for the public,” Ramswell said at Monday’s meeting. “Wouldn’t this be a great opportunity if we could work together and purchase the property for public beach access?”

She said Bos is agreeable to having Matthews represent him in discussions about the city potentially buying the land. Matthews then came to the podium and said Ramswell had contacted him a couple of weeks ago about the possible purchase, and he confirmed that Bos is open to having such a dialogue.

On Wednesday, Ramswell said she didn’t know the cost of Parcel B and that she hasn’t discussed that issue with Bos or Matthews.

“I didn’t want to have any discussions outside of the council,” she said.

As for funding the potential land buy, Ramswell said Destin could apply for various grants such as those provided by the Florida Communities Trust. By purchasing the parcel, the city would ensure the site remains one of the last pristine areas of Destin while also making it open to all beachgoers, she said.

If the city buys the land for a public beach, however, it might face some difficult infrastructure issues, such as finding an area for permanent public restrooms.

Although Parcel B is zoned by the city for residential use, Ramswell said the U.S. Army Corps of Engineers prohibits the construction of any structures, including permanent restrooms. The Corps uses some of the property to place sand dredged from the East Pass, and as a support system for the east jetty.

“If we want to keep the harbor open, it’s vitally important that that support system isn’t disturbed,” Ramswell said.

The Corps’ prohibition on structures has “been the source of discussion on that parcel for several decades,” as well as the basis of several lawsuits involving different owners of the property, she said.

The city’s O’Steen Public Beach Access stands by the northwest corner of Parcel B and leads to a state-owned portion of beach. And farther northwest at the end of Gulf Shore Drive stands the 7.6-acre Norriego Point. The city’s planned stabilization of the point, which could be completed by next spring, is expected to increase its overall size to 13 acres.