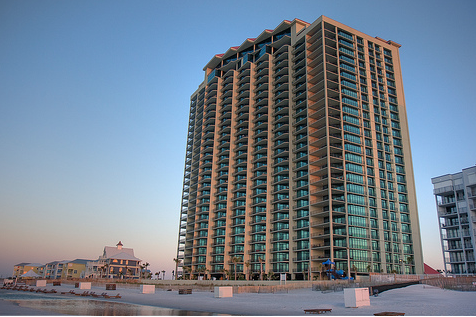 The developers of the unfinished 32-story Phoenix West II told the City Council on Tuesday they don’t have the money to build a pedestrian bridge over Perdido Beach Boulevard or pay for other amenities promised six years ago in better economic times.
“I have hocked and sold everything I own and lost my house,” said Gene Brett of Brett/Robinson, one of the development partners in the $245 million project that received a $37.2 million payment from BP after the 2010 oil spill.

“If we finish this building it’s because God has honored us,” he said. “My two partners and I have lost everything we’ve worked for and this will be our 45th year in business.”
Brett and Tommy Robinson urged the council to approve the Planning Commission amendments to a March 2005 agreement that called for the developers to construct a raised walkway from the condo complex to Village Tannin, a planned community on 60 acres on Ala. 182. Instead, a signalized pedestrian crosswalk would be installed, if allowed by the Alabama Department of Transportation. There was no projected cost for the elevated walkover.

Under the revisions, the developers would not donate $2 million to the Cross Island Connector Fund, but would pay an impact fee totaling $1.53 million on the 358 condo units at $4,280 each, and pay that in 60 monthly installments with 2 percent accrued interest. The council will vote on the changes on Feb. 22.

The BP oil spill hit in April 2010 and brought sales to a halt. In December 2010, BP agreed to pay Brett/Robinson $37.2 million with the stipulation that both the developers and the 188 people who had already bought units in the complex agreed not to sue BP or others involved in the Gulf oil spill. Of the $37.2 million payment, $35 million was for brick and mortar and $2.2 million was paid to the developers’ attorneys.

Plans to replace the elevated walkover with a traffic signal has not made Village Tannin property owners happy, said George Gounares, the developer. “The overpass was a promise to us as a concession to having that big building across the street.” He said folks bought commercial lots in Tannin based on that overpass, which would bring shoppers to the planned lakeside retail and restaurant area in Tannin.

This is Brett/Robinson’s 19th condo complex and is expected to be complete in March 2013.