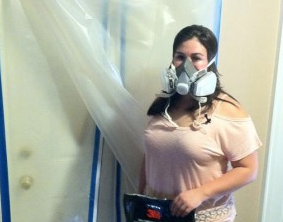 CHICAGO – A company managing condominiums and apartment rental units is being accused of exposing residents to potentially dangerous mold and not telling them about it.

CBS 2′s Dave Savini investigates the conditions and a woman’s fight for justice.

Sonia Alvarado’s home is sealed in plastic. To get a glimpse inside, she puts on a special protective mask and mentally braces herself.

“It’s a brand new mask,” said Alvarado. “That is the only way that I can go in there.”

She says her home makes her sick. For more than a half of a year, Alvarado says she has suffered increasing health problems including horrible rashes, hives all over her body and lung problems.

“I couldn’t really catch my breath anymore,” said Alvarado who suspected mold in her building was causing her problems.

A company that manages her complex had conducted mold testing, but Alvarado says officials there refused to giver her results.

“I feel bad for the people still living here,” Alvarado said about neighbors who were unaware of the mold and the testing.

Inside her unit, thru her mask, Alvarado said: “You can totally see the mold,” as she pointed to black spots across wood exposed in her ceiling.

Her unit is finally being gutted and cleaned. She says common areas like the laundry room also had mold on the walls. Neighbors report mold on ceilings, trim and rotted water-damaged windows. Shadia Kemper used to live below Alvarado. Kemper says her 5-year-old daughter got ill every night until she noticed black spots on the windows and blinds.

“As soon as we put her to bed, it would wake her up out of her sleep,” says Kemper. “She couldn’t sleep. She couldn’t breathe.”

They moved out of the building and her daughter is better.

Alvarado also is living elsewhere, but she’s not better. She says a fungus connected to mold has been found in her lungs.

“So everything inside me is inflamed as well as half of my heart,” says Alvarado.

While at the complex, a man identifying himself as head of maintenance told the CBS 2 crew to leave and would only say, “They’re taking care of things.”

When asked whether he would want to live in the conditions at the complex he only replied, “I’m not commenting.”

Attorney Jeff Asperger represents Alvarado and says the company would not give her the mold test results until a lawsuit was filed.

“When owners, landlords and developers become aware of potential problems which would affect the health of tenants, they have a duty and obligation to notify the owners and tenants of that problem,” said Asperger. “And not allow them to continue to be exposed.”

“Don’t want to come back here anymore,” Alvarado said thru her mask looking around her condo.

She is suing the Boulder Hill Condominium Association along with the complex’s management company — Arthur Goldner & Associates. Both refused to talk to us.

The homeowner’s association has been paying for the renovations, and for two months of temporary housing for Alvarado.

Homeowners can sue the past property owner – to basically have them buy it back – if they find a problem wasn’t disclosed during the sale. That is Alvarado’s plan.