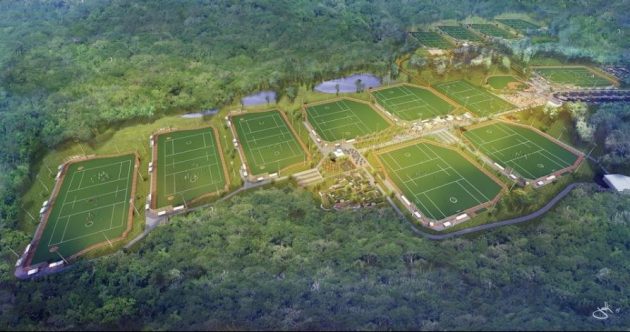 PANAMA CITY BEACH – The Bay County Commission on Tuesday is scheduled to sign off on a major new development east of Breakfast Point now that state officials have raised no objections to it.

The 1,250-acre development would include a new sports park, two schools and a mixed-use St. Joe residential development. Officials are hopeful the sports park will help draw in more year-round visitors and the schools would alleviate crowding in Beach schools.

Ian Crelling, planning manager for Bay County, stated in a letter to the commission the 895 acres of land being developed by St. Joe for residential housing and commercial uses “will be designated to help support the growing Panama City Beach population.”

The County Commission is slated to give its final approval to the land-use plan and zoning change for the project, planned to be located on the north side of U.S. 98 between Wildwood Road and Breakfast Point Boulevard. The proposal calls for rezoning the acreage from agriculture/timberland to mixed lane use, public/institutional and conservation preservation zone. The plan amendment request has been reviewed by the Florida Department of Economic Opportunity, which stated no concerns.

Access to the site is off Back Beach Road, and the Florida Department of Transportation (FDOT) has committed to designing and constructing a new traffic light at Cauley Avenue to serve the park and future school site.

All of the traffic over five years is expected to enter and exit the development at U.S. 98 via Cauley Avenue. The five-year study estimates a total of 691 vehicles will be turning in and out of the project at that intersection during the peak afternoon hour. A public hearing on the planned improvements to the intersection has been scheduled for Jan. 24 at 5:30 p.m. at the Palms Conference Center on the Beach.

The Department of Transportation is currently conducting a study about widening Back Beach Road, including the stretch of highway going by this project. Ian Satter, public information director for FDOT, said there are funds for minor rights-of-way acquisition in the five-year work program but not the money to begin construction on the Back Beach Road widening.

“We’re in the home stretch of a two-year study,” Satter said. “It is indicating to us that widening is necessary for Back Beach Road in that area.”

The meeting is at 9 a.m. at the Bay County Government Center on 11th Street.