Coastal Art Center To Honor The Past, Embrace The Future 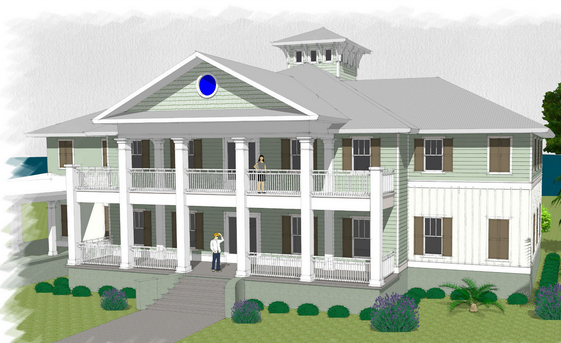 ORANGE BEACH, Ala—Visitors to the Orange Beach Festival of Arts will be treated to the usual sights and sounds and tastes and entertainment the 41-year-old festival is known for.

But they’ll also get another treat. One which Coastal Arts Center of Orange Beach Director Desiree Blackwell can’t wait to show them.

“I’m so humbled just to get to be a part of this,” she said.

A colorful rendering for the new gallery will be on display during the two-day festival. Colors depicted on the rendering of the new building aren’t necessarily going to represent the final product, Blackwell said, because the final color palette has not been chosen.

What has been chosen is attention to detail in honoring the Orange Beach Hotel which has served as the city’s art gallery since the early 2000s. A search for a recent leak in the building resulted in the discovery of damage beyond repair to the structure local historians say was built in 1923.

It was a sad revelation about a beloved city landmark, but it will be far from forgotten.

The city has decided the new space will reflect the style and substance of the former gallery.

“Even our T-Shirts from the festival will say ‘Honoring the past, Embracing the future,’” Blackwell said. “We’re trying very hard to honor what was here and we want to embrace the future.”

From the very start, it seems. When the new building is opened the inaugural show will be a selection of new art dedicated to the old hotel.

“Our first exhibit will be in memory of the old building and we have put out a plein air open invitation for artists to come and capture the grounds in whatever medium they like,” Blackwell said. “Photography, watercolor, acrylic – it doesn’t matter what they do. They can feature one particular element, the entire landscape, or they can do just the house; whatever they want to do.

“And those pieces will be juried into a show for the very first exhibit.”

Blackwell said the emphasis will be on having local artists who previously had works at the gallery participate in the first showing.

A possible permanent display will present artifacts found during the dismantling of the building. Some items have already been collected for this feature.

“We found a little baby rattle under the house and you wonder whose that was,” Blackwell said. “We found some old bottles and other things and when we get it all together we’re going to try to do a display case of everything we find. We may not find a lot, but if there are a few pieces we are going to feature a display case.”

Other pieces of the historic building will still be around as well when the new gallery opens.

“We are trying to keep, and use, several of the windows,” Blackwell said. “They will be interior windows. Also the door s and transom s from the water side, the old front door. A little bit of the flooring; it depends on how much we can save.

“And we’re trying to use the octagonal columns off of the waterfront side of the house. I’m not sure where they can be used. They are a little too short for the interior design space, but they will be decorative somewhere.”

During the festival volunteers will greet visitors at the gallery where the renderings and other materials will be displayed. Those volunteers will be knowledgeable about the history of the building as well as show off what’s coming.

Blackwell said the new building will almost quadruple the amount of space available to staff at the center compared to the old gallery.

Downstairs will include office space, reception area, gift shop and a full kitchen.

On the back side of the floor plan will be a two-story gallery with an upper viewing area on the south side of the building. The two-story space will face Wolf Bay.

“All this is open gallery space,” she said pointing to the floor plan. “Instead of a mezzanine all the way around we have the balcony. There’s going to be a curved, really artistic railing.”

“It’s a multi-purpose facility that’s going to allow for weddings, conferences and executive meetings,” Blackwell said. “There are going to be several spaces.”

The small building between the gallery and the Clay Studio, primarily used for children’s classes, will get a remake during the process as well.

“It’s going to be a little bit bigger and it’s going to mimic the Clay Studio on the front,” Blackwell said.