Coast Not Prepared For Environmental Threats 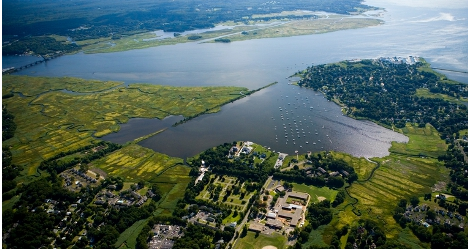 Coastal Alabama reacts well after hurricanes and other emergencies, but doesn’t do nearly as good a job of preparing for such events, participants in a regional environmental forum agreed Wednesday.

As development increases, and new perils such as rising sea levels appear, the area must forge emergency-response plans now or risk being on the hook for billions of dollars in increased damage, they said.

The latest forum in the “America’s Energy Coast Leadership” series took place at the Five Rivers Delta Resource Center on the Causeway. The meetings in Louisiana, Alabama, Mississippi and Texas are addressing environmental protection and disaster readiness.
The series will conclude with a session in New Orleans on May 30, according to Valsin Marmillion, managing director of America’s Wetland Foundation.

Future disasters, whether natural or manmade, such as the Deepwater Horizon oil spill, could have a more severe effect than those in the past, said Sidney Coffee, senior advisor to America’s Wetland Foundation.

“We could be facing $350 billion in damage by 2030 if we don’t take action and change that,” she said. “That actually outpaces the economy of the region.”

A survey conducted by Entergy Corp. along the Gulf Coast found that Mobile and Baldwin counties rated high in disaster response and evacuations, but poorly in public awareness and government planning, said Jeff Williams, Entergy director of climate strategy.
Susan Rees of the U.S. Army Corps of Engineers said the spill and storms of the past decade backed up those findings.

“We do a good job of reacting. We do a poor job of planning,” she said. Williams said that the coast could reap profits long into the future by investing now in projects like beach renourishment, stricter building codes, wetland reconstruction, levees around refineries and smarter offshore drilling. He pegged the overall cost of the projects at about $120 billion.

“It’s much more cost-effective to make these investments up front than to spend money picking up the pieces,” he said.

According to Marmillion, Alabama is among states that place a lower priority on their coasts, despite the fact that their coastal regions are critical to their economies.
“They think of themselves as states with a coast rather than coastal states,” he said.
Rep. Randy Davis, R-Daphne, one of the chairmen of the Wednesday event, said state lawmakers are working on some readiness concerns, such as tougher building codes. He said that tornadoes in central and north Alabama last year and this week demonstrated the importance of the issue.

Williams said global warming will pose unique problems for the Gulf Coast.
“It’s not a question of if man’s activity is warming the planet – 97 to 98 percent of scientists absolutely believe that it is,” he said. “The question is how much impact is it going to have, and when will it happen.”

Additional forum events are planned for Orange Beach on March 22, as well as South Padre Island, Texas, on March 8, and St. Mary and Iberia parishes in Louisiana on April 11.