Behind The Scenes at Gulf Shores’ Hangout Music Festival

The successful music festival comes from committed leadership and community cooperation, and everybody wins – including condo owners 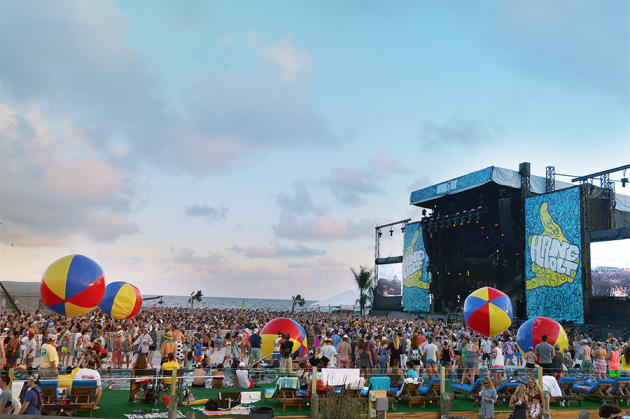 Gulf Shores City Council members did a very smart thing in the last months of 2009. They approved entrepreneur Shaul Zislin’s ambitious plans for a new three-day music festival to take place the following May on the public beach behind his recently opened Hangout restaurant. And they issued a permit to allow the musical concert to run an hour later than would normally be allowed under the city’s noise ordinances.

That decision by the Council has enabled an event, the Hangout Music Festival (HOMF), to take place in the city, resulting in a $31 million in economic impact in 2013, and this is expected to continue is subsequent years. That figure was reached by an independently researched economic impact study done in late-. The study, which included numbers from the 2013 festival, also indicated that close to 90 percent of all attendees are identified as non-local, and 80 percent are out-of-state, all of whom required overnight accommodations in the area. The study reported “that the occupancy rate, for the weekend of the Music Festival, reached near full capacity (90 percent) versus 30 percent reported for the pre-festival years.”

“Our occupancy is double the rate it was before Hangout Music Festival first began for the time slot of the festival,” said Sarah Kuzma, Corporate Relations Director for Meyer Real Estate. “People begin booking that time period for the next year right after the end of the festival and by January we’re booked 100 percent for the duration of the festival.”

Meyer and Kaiser are two of the lodging partners who advertise on the festival website.

Gonzalez also praised the Condo Rental section on the HOMF’s website. “Now they’ve really gone to a strategy that educates as much as presenting offers. It’s good particularly for people who aren’t used to vacation rentals. They would usually come in looking for hotel rooms. We’ve seen a nice steady spike year over year with referrals from the Hangout Music Festival website to our website so it’s definitely been one of the better referral resources we have.”

The festival is now a four-day event and this year drew 40,000 revelers to Gulf Shores, many arriving before the festival actually began.

So what does it take to pull off a large, four-day event with many moving parts and keep it growing from year to year?

“I think that probably the biggest factor at play is the long-termed view,” said Shaul Zislin, founder and vice president of Hangout Music Festival LLC. “The biggest thing we have done right is that from day one we have approached this as a long-termed investment. I always tell my team – let’s make all the decisions we can based on how it will look on the 10th annual, not on the second annual, not on the third.”

“Preparations for each Hangout Festival start a year out,” said Sean O’Connell, Festival Director for Hangout Music Festival. “Immediately after the festival, our team recaps the past show and identifies areas and experiences we want to improve. In fact, we already started booking artists for 2016 before this year’s festival started.”

“Approximately 1,400 people work on the festival,” said O’Connell. “The Hangout Fest has a year-around dedicated staff that works on the booking, operations, marketing, and sponsorship sales. We also bring in experts in logistics and production to manage various aspects of the event.”

O’Connell also touts the tourism advantages that come with the festival’s high profile that showcases Gulf Shores and Orange Beach to a wide audience.

“At the end of the day, we’re providing a vacation for people from all 50 states and 30 countries,” O’Connell said. “The festival and its location on the shores of the Gulf of Mexico created a vibe unlike any other event. It seems like everyone is in a good mood. They are kind to each other and laid back. We’re in the “happy” business. We have families that bring four generations to the festival year after year. We have dozens of wedding engagements, five actual weddings and tons of reunions.”

HOMF’s O’Connell said that the cooperative working arrangement Hangout has with City of Gulf Shores “is very healthy. The festival reimburses the City of Gulf Shores for the resources it uses. This is in addition to the tax revenue generated by the city. The festival management team meets with the city throughout the year to update each other on plans and to collaborate on safety and operational issues.”

The City of Gulf Shores’ primary liaison between the various city departments involved in the festival and festival organizers is Grant Brown, Recreation and Cultural Affairs and Public Information Officer. He agreed with O’Connell’s assessment of the mutually beneficial cooperative effort between city and festival organizers.

Through the years, in addition to the city moving the initiation of the noise ordinance back an hour, it also suggested to festival operators that they turn the performance stage speakers to the south, away from the rest of the city’s population, and agreed to up the attendance cap last year to 40,000. Gulf Shores also extended the festival’s contract to 2025.

Brown acknowledged that Hangout Music Festival LLC (HOMF-LLC) essentially handles almost everything required for the festival, but the popular event does require certain measures to be taken by the city. “We enable them with city ordinances, permits, those kinds of things, and we turn a few of our roadways into one-way streets to help the flow of non-festival traffic for access to Highway 59,” he said. “Our fire and rescue department plays a big role in the safety of the event, as does our law enforcement. We don’t have enough police officers to provide police protection for the city and for full support at the festival so we hire sheriff officers, other agencies’ officers who are off-duty from their typical work situations to come in and work the music festival. This contingency of dozens of law enforcement officers covers the festival site around the clock to handle law enforcement issues. Hangout itself hires a security coordinator and contracts with two or three security companies to provide security for the performers, to screen at the gates, and other things. Our law enforcement oversees that but does not actually perform those functions.”

Brown said the city also has a team of fire-rescue employees stationed at the festival site and works in a coordinated effort with Faulkner College through its EMT program and South Baldwin Regional Medical Center, which has medical staff onsite.

Traffic is always a concern with an event like this but Brown said it’s not a problem during the festival.

“Six years in, between Hangout [festival] and the city, our partnership essentially has gotten very good at moving traffic that is coming to the event. Significant money is spent on a shuttle system. The festival hires a company called CID Entertainment to do shuttle service with charter busses where they presell shuttle passes to the public so they know how many people are going to be coming from all three directions toward the coast. Based on the presales, they know how many shuttles to employ, how many stops they need. So, it’s a very sophisticated system.”

All expenses incurred by the city during the festival, Brown reiterated, are reimbursed by HOMF-LLC. “It’s a for-profit event down there and to provide tax-payer’s resources exclusively for a for-profit type of entity would not be right.”

It would be astounding if an event of this kind and size didn’t bring with it a few problems and that has been the case with the festival. The biggest issues have revolved around traffic, noise and alcohol abuse and drug use. The traffic situation, with the employment of shuttles and rerouting traffic, seems to have been dealt with about as well as possible. The noise issue, while not perfect, has nonetheless improved by turning the speakers southward and the good non-attending citizens of Gulf Shores have become increasingly tolerant about it.

Drug use and excessive alcohol consumption at this year’s festival resulted in more than 100 drug arrests with 126 criminal charges, according to statistics compiled by Gulf Shores police. Those numbers are almost double last year’s totals, but about half as many as 2011

Brown acknowledged that there are potential problems with the festival that brings so many people to such a small patch of a modestly sized city. “But over the six years of the festival we’ve done a very good job of mitigating any issues,” he said.

Alabama Media Group’s news website, Al.com, reported that “no one brought complaints to the Gulf Shores City Council’s work session” after the event. Such silence hasn’t always been the case, so measures to improve conditions may be working.

Hangin’ out in the Future

As for the festival’ future, “It’s an evolving event,” said Brown. “And one of the reasons we like this event so much is that it exposes our area to a group of people who will return to Gulf Shores for vacation as they age and have families. We’re excited that Goldenvoice is now a partner with [the festival]. They’ve been doing major events for many years, a lot longer than the City of Gulf Shores has and longer than [HOMF-LLC] has, so learning from some of their experiences will make our event better.”

“It’s really about how we work with the community as a whole,” said Zislin. “Every time you introduce something of this magnitude, there are a lot of affected parties. Through the years, every year, you try to make sure you get better at minimizing negative impacts and maximizing opportunities – not just for us as the organizing entity but for others in the community in order to achieve the consensus that [the festival] is indeed a long-termed, huge benefit to the community.”

O’Connell’s perspective is infused with optimism. “With the festival’s new alliance with Goldenvoice, producers of Coachella, New Orleans Jazz Fest and many other festivals, we have a great partner who loves what we do and loves the event. In the future we’ll be tapping into this great company and its resources so we can continue to improve.

This year’s Hangout Musical Festival marked the first year the event included a separate webpage of the event’s website to lodging and included partnerships with Kaiser Realty, Meyer Vacation Rentals, Spectrum Resorts and Brett/Robinson Vacation Rentals. The lodging page also included a “Condos 101” primer stating the benefits of renting a condo and considerations regarding condo location, type and other factors.

“For first-time festival goers (the average age is 27, 60 percent are women), this is their first introduction to staying in a condo,” said O’Connell.  “The music festival spends a lot of resources educating fans to explain the ins and outs of booking a condo. It works. About 84 percent of our fans rent a condo or hotel.”

Despite the optimism regarding condo rentals, O’Connell doesn’t shy away from a cautionary note. “Before the festival, occupancy on that weekend was 30 percent,” he said. “Now, the festival has helped grow occupancy to above 90 percent. But, condo owners shouldn’t take that for granted. If prices go up, occupancy will go down. There is a very important relationship between the festival and condo owners.  Keeping condo and hotel prices within reach will ultimately determine if the festival stays in Gulf Shores in the long term. We have isolated circumstances of price gouging and everyone needs to be mindful of keeping rental fees reasonable. We’ve built a great thing together and created rental revenue that would not have existed if not for the festival. We constantly work side by side with our vacation rental partners. One example of that is to ensure that there are shuttle stops near the majority of condos. By locating shuttle stops near condo buildings, we are making it easier for fans to stay there.”