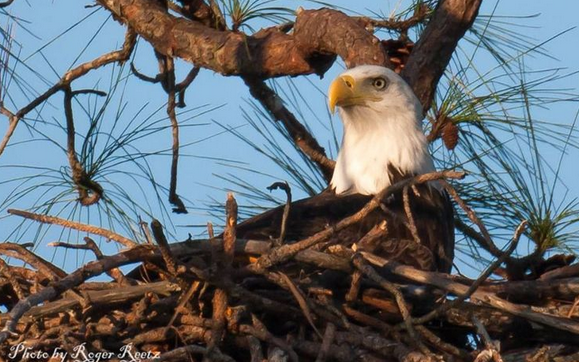 GULF STATE PARK, Ala. — The eagles have landed.

For the third consecutive season a pair of bald eagles have returned to their winter nest at coastal Alabama’s Gulf State Park. The appearance was confirmed Monday by photographer and naturalist Roger Reetz, who tracked progress at the nest last year.

Reetz shared his photos of the bald eagles on his social media channels last night: the female nestled in a rebuilt nest, the male standing guard atop a nearby dead tree.

The pair produced, nested and hatched two offspring last year. Only one of those eagles survived to eventually leave the nest on her own. That survival rate is typical for newly hatched bald eagles in the wild.

The bald eagle family captured the attention of the region last year, surviving common hazards of nature including strong storms which could have blown the babies out of the nest, record-setting freezing temperatures along the coast last February and would be attacks by hawks and other predators.

This marks the third consecutive season the bald eagle pair has nested at the state park. Bald eagles mate for life. This pair has produced a surviving female offspring each of the past two seasons.

You can track progress at the eagle nest on Reetz’s Love Lizards Photography Facebook page Here: