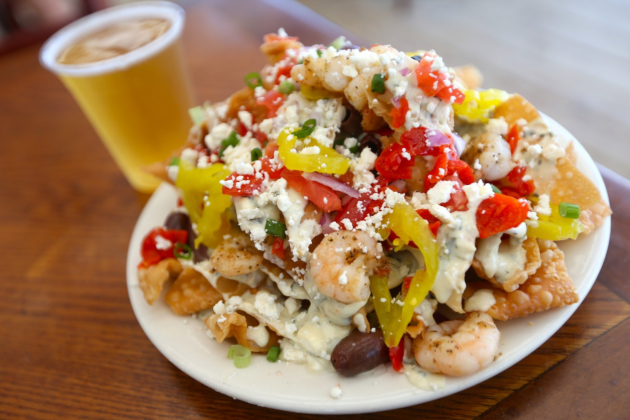 There are plenty of places at the beach that pile up an appetizer of traditional nachos, but only the Flora-Bama Yacht Club at the Alabama-Florida state line serves up their nachos with a Mediterranean twist. One of the most popular apps along the beach highway is the Greek Nachos. Imagine Mexican nachos but with large Gulf shrimp, tomatoes, banana peppers, feta cheese and Greek spices and herbs. Fried wonton chips smothered in a spinach-feta-cream sauce topped with grilled Gulf shrimp, tomatoes, crumbled feta, Kalamata olives, peppadews, banana peppers, green and red onion. More than enough for two or more.

Take a seat in one of the Adirondack chairs in the sand and watch the boats float by with Chef Chris Sherrill’s wildly popular Greek Nachos app.  (Photo by Brian Kelly/[email protected]). We begin with one of the most beloved restaurants on the island — Cosmo’s Restaurant and Bar the Firecracker Shrimp. This is the signature appetizer at Cosmo’s and is among one of the most well known starter dishes at the beach.

It’s lightly dusted bay shrimp fried and tossed in a spicy remoulade sauce that has some kick to it. Yep, it’s enough for two or a meal by itself. Belly up to the bar or have a seat on the open patio with this popular app. (Photo by Brian Kelly/[email protected]) Cajun Empanadas
GT’s on the Bay (Good Times) is one of the newest and most exciting family restaurants and bars to open in Orange Beach in recent years. The appetizer portion of the menu features an app not found around here — Cajun Empanadas. It’s a delicious twist on the famous Cajun pistol. It’s Louisiana crawfish, Conecuh sausage and tasso ham with sweet peppers and creole spices all wrapped in dough and deep fried. In the few weeks GT’s has opened its doors, the Cajun Empanadas has become a hit with locals and tourists. And with good reason — it’s just awesome.
Have a seat on the patio and take in the view of Bayou St. John with a cold, craft beer.
What: Cajun Empanadas.
Cost: $9.
Where: GT’s on the Bay, 26189 Canal Road, Orange Beach, Ala., 251-980-8400. At Anchor Bar and Grill Chef Jonathan Kastner has created a starter dish unlike anything on the Alabama (or Florida) Gulf Coast. The Short Rib Nachos is a different take on the loaded tots plate that’s popular on the island. It’s tater tots topped with braised short rib with Craine creek arugula, pickled onion, lime crema, tomato jam and avocado. Plus the tater tots.   Enough for two for sure.

Have a seat on the deck and watch the marina and Terry Cove with a cold, boutique draft beer along with this incredible appetizer. (Photo by Brian Kelly/[email protected]). 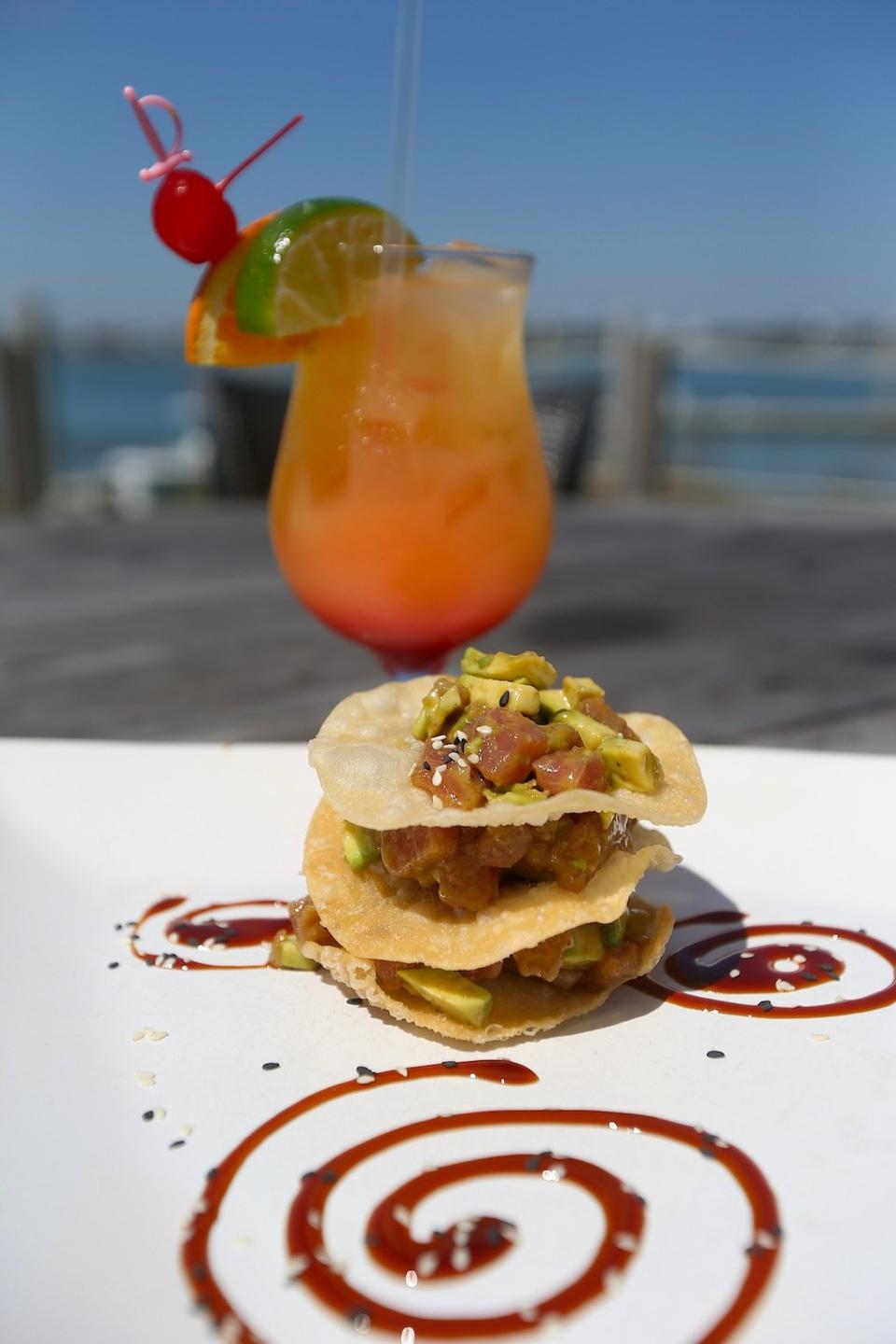 Sometimes, you just want an upscale, smaller first course done with style and flavor. Cobalt The Restaurant is famous for their Tuna and Avocado Stack, a delicious and light appetizer. It’s sashimi grade tuna and perfectly ripened avocado marinated in sweet Asian sauce, served between crisp wontons. Sorry, this is just enough for one and you won’t want to share. It’s an app that leave plenty of room for the entree.

Have a seat on the patio and take in the view of the Intracoastal Waterway and Perdido Pass while sipping on the Sunset Cocktail and Tuna and Avocado Stack. (Photo by Brian Kelly/[email protected])

What: Tuna and Avocado Stack. 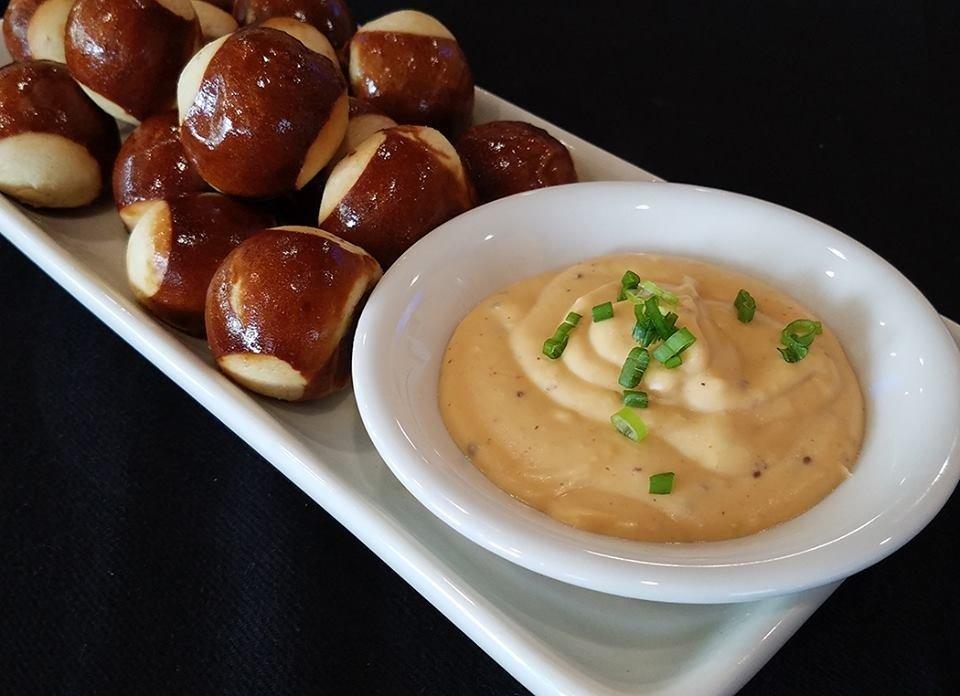 Luna’s Eat and Drink has become the premier bar to sample a plethora of craft and boutique draft and bottled beer, dozens in fact. So, it seems fitting Luna’s should create a signature app — Beer Cheese Dip. No other description is required (it’s a dip, it has beer, it’s awesome) but I’ll provide a bit more on this superb appetizer. It’s a creamy blend of Swiss, cheddar, and dark beer! Served with soft pretzel bites. Add extra pretzels for just $2. 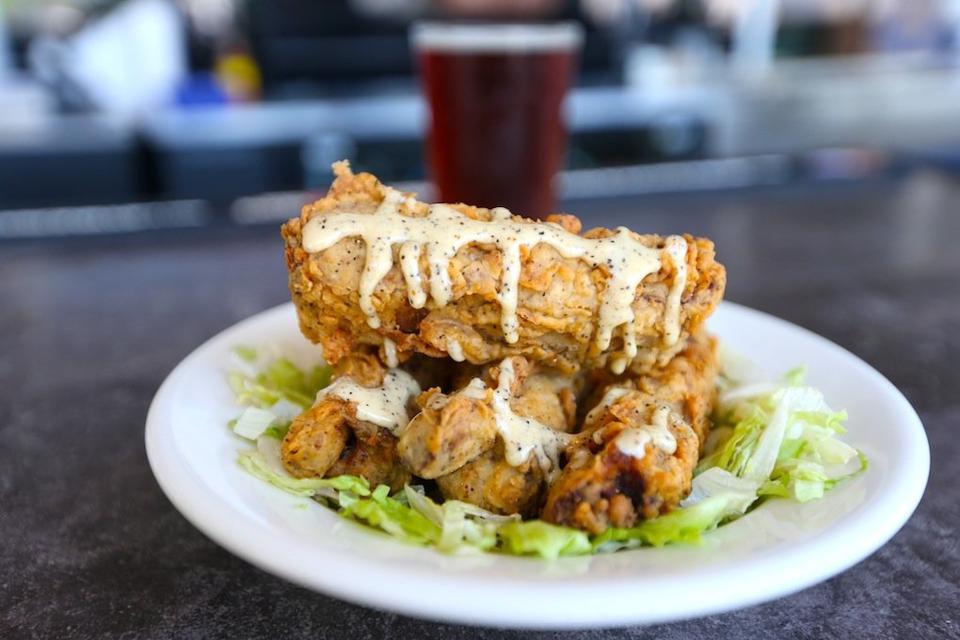 Have a seat at the outside bar and watch the boats at The Wharf Marina and pair this app with a cold draft beer. (Photo by Brian Kelly/[email protected]). 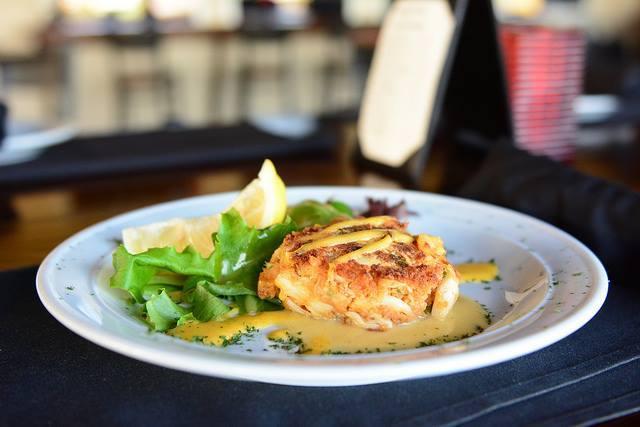 The crab cake is no stranger to appetizers menu sections, especially at Alabama’s many restaurant eateries, but few do it as well as Nolan’s, the famous juke and live music venue in Gulf Shores. Nolan’s Lump Crab Cakes are done in an upscale version of this appetizer with blue crab meat and lemon butter sauce. Not really enough, this starter dish is enough for one but will fill you up, too. 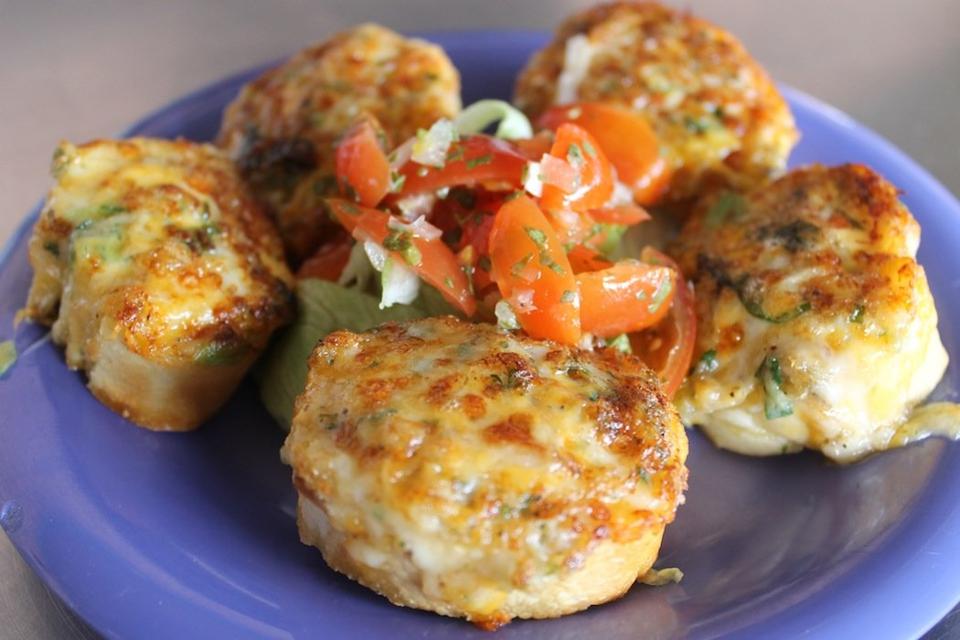 Crazy Sista’s Crab Toast, which is a mini version of our best selling, crowd favorite — The Crab Melt. Crazy Sista’s Crab Toast is Sweet Blue Crab Claw meat, Swiss & Cheddar Cheeses, slivers of Green Onions, and all mixed with Mayo. Spread on a French Toast Baguette and toasted until the cheese is bubbling over the top..served with a nice cherry tomato pico de gallo. You get five of these bad boys. 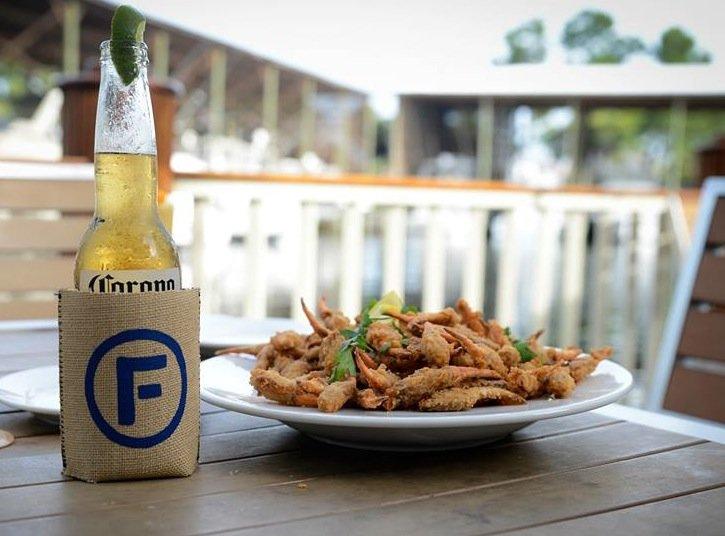 There are a few items in this guide that are staples of appetizer menus, including the fried crab claw, but perhaps few do this popular app as well as Fisher’s in Orange Beach. It’s a heaping pile of Gulf crab claws marinated with corn vinaigrette, shaved red onion, fresh herbs. Add a cold bottle of beer and a view of Orange Beach Marina and kick back. Plenty for two people here, so dig in.